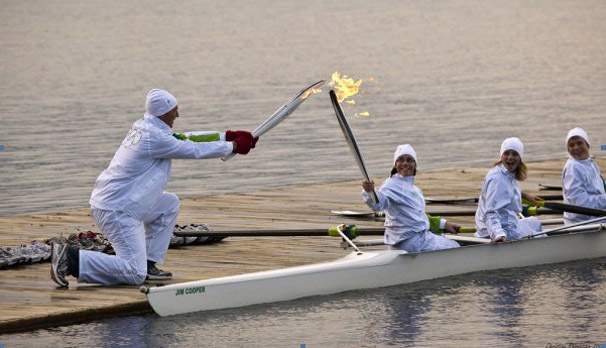 row2k's third installment in our 2012 College Preview interviews is with Old Dominion Freshman Shannon Huff. We talked with Huff about how she found her way to ODU from Victoria, Canada; her experience being a Torchbearer for the 2012 Olympics; and much more.

row2k - You came to ODU from Victoria, CAN. How did this come about?
Shannon Huff - After a back injury from my time as a competitive gymnast, I picked up rowing as something to take my mind off the endorphin withdrawal, right at the beginning of 8th grade. I was hooked from the first time I strapped in my feet. My high school coach, Case Deboef, has a daughter that had just moved to the USA to row in a NCAA Division 1 program, and his stories about her inspired me. I suppose from that very first season, it was always my goal to row at the collegiate level. In my mind it was a given, I just had to prove myself.

In the next five years I didn’t physically grow very much, and having raced in both lightweight and open events as a junior rower at Victoria City Rowing Club (VCRC), my main focus was on lightweight programs. In the habit of reading race results, I looked up the results of the 2010 Head of the Hooch regatta and noticed Old Dominion University on the podium in the Women’s Lightweight 4+. This was the first time I’d heard of Old Dominion and was especially interested in their success in this event after I found out the rowing team is a young heavyweight NCAA program. After contacting Assistant Coach Mike Lucey, I had a really positive feeling about both the University itself, as well as the rowing team. Unlike the responses I got from some coaches, which seemed to be that my results and scores were impressive but I was too small to have an impact, it was refreshing to talk to coaches who recruit the athlete, not just the body type. For a three year old program, Head Coach Dan Garbutt and Coach Lucey have led the team to big accomplishments in the collegiate rowing world, including two second-place finishes at the Dad Vail Regatta last year in the Varsity 8+ and 4+. With their knowledge and experience in the sport of rowing, it was a perfect fit.

row2k - You were a Torchbearer for the Vancouver Olympics. Tell us about that experience and how you got that opportunity.
Shannon Huff - This one’s a bit of a funny story. At the time, I was in my third year of rowing at Victoria City, where the Training Center for the Canadian Men’s National Team is based. The Vancouver Olympics were following the summer Olympics in Beijing where the Canadian Men’s 8+ won gold, and the community was outrageously proud of them. I got an email one day claiming that I had been selected as an Olympic Torchbearer for the Vancouver 2010 Games, and discarded the message as spam. The next day the Juniors Head Coach at VCRC, Aalbert Van Schothorst, asked whether I had received an email about it – he (as a coach) and nine promising junior athletes were selected as Torchbearers. We were to row halfway across the lake and receive the flame from the Men’s Olympic Gold 8+, as a symbol of those athletes ‘passing the torch’ to future Olympians.

The experience was surreal! Our run was on the opening day of the Torch Relay, and I watched on TV as the flame arrived from Greece that morning. Even before both boats launched, the energy was incredible. The boathouse tarmac and shore was packed with media and people who had come out to watch our leg of the relay. As we received the flame and rowed the torch in, I have never been prouder of my sport. I couldn’t be more grateful for the opportunity to be a part of highlighting rowing in that way.

row2k - Who was the most interesting person you met during that experience?
Shannon Huff - During our practice run-throughs in the days leading up to the Torchbearing, we got the opportunity to meet and chat with the Olympians and their coach Mike Spracklen, who was also a Torchbearer. He was one of the people I was most excited to be introduced to because he has been such an influential and successful coach for British, American and Canadian National teams. The Olympic athletes themselves were very friendly and willing to talk to us, which I really appreciated. Meeting people who have achieved the goals that I aspire to is one of the most valuable things I took away from the entire experience.

row2k - You are on the shorter side for a rower, how do you make up for this on the water and on the erg?
Shannon Huff - Although my height seems to be a competitive disadvantage, I refuse to let it be an excuse. There are many factors that produce a good athlete, and I try to focus on the factors that I am able to change. Physically, dynamic stretching before a workout, and long stretching after are key parts of my routine because they keep me flexible so I can maximize my length. On the erg, my coaches have always emphasized staying long, particularly at the top end of the stroke, and core exercises help me maintain pressure right to the release - skills which I can directly translate to the water. Mentally, my approach to every workout is committing to leaving nothing behind. Every time I get on the erg or in a boat, I make the decision to row like I have nothing to lose, and do what I am capable of. I work to surprise myself, and I do not limit myself based on my size. Every athlete has obstacles; the ones that succeed are the ones that are willing to work past them.

row2k - What are your strengths as both a student and an athlete?
Shannon Huff - I finally agree with everyone that ever told me I am stubborn, and I think that as I’ve grown up, this has translated into determination and self-discipline, which are the skills that I feel have benefitted me the most as a collegiate athlete. My determination has pushed me to set big goals for myself and refuse to lower the bar, and my self-discipline helps me stay focussed and stick to it. I believe that the traits that make me a successful athlete can and should be applied to better myself in all aspects of my life. As rowing has made me more focussed and self-motivated, I try to apply the same skills to my effort in the classroom. I have also been recognized by my coaches and teammates for my leadership, which is one of the greatest compliments to me, because I strive to act in a way that inspires others and be someone that is worth following. I thrive on the team atmosphere of rowing, and do my best to connect my team to a common goal.

row2k - How has this season gone so far and what are your goals for the spring?
Shannon Huff - Entering into the program at ODU, I’ve encountered a big shift in the training that I’m used to. Throughout my rowing career, I’ve been primarily a sculler, and spent much of my time the last two years of junior rowing racing a single. I raced the 1x event on the Junior National Development Team at CanAmMex and won, raced at the 2010 National Rowing Championships where I placed third, and was part of a small boat development group through the fall of that year. Over the summer I was training a 4x, 2x and 4+ to race at Royal Canadian Henley with VCRC under Coach Jesse Hume, placing first, second and third respectively.

Moving here, I’ve gone from mostly sculling to strictly sweeping, and small boat rowing to a big boat mentality. In the fall, I kicked off the season stroking the Freshman 8+ at ODU, testing the water with all new teammates. I had a good time finding speed with people I haven’t rowed with before and trying my hand in the stern of a boat, which is still fairly new territory for me. After the first regatta, I was also placed in Varsity 8+ for Head of the Hooch, where ODU placed second in the Open 8+. The big boat speed has been a lot of fun to be a part of, and after getting a little taste of the podium, we’re feeding off of that and going for gold this spring. My goals for the coming season are not too complex; I want to win. The biggest marks on our calendar are CAA Championships and the Dad Vail Regatta, and my goal is top of the podium at both. I’m proud of the work we’ve done up to this point in winter training, and I look forward to the work we’re about to do to get there.

row2k - What are you studying and do you have any plans for after graduation yet?
Shannon Huff - My major at Old Dominion is Pre-Med Biology. I have always had an inclination towards biology, and my involvement in sports has made me even more interested in this topic. I plan to train and trial for Canadian U23 Teams in the upcoming summers between semesters, if my racing schedule here permits, and after completing my degree I plan to return to Canada to pursue my goals of making National Teams at home. Depending on how rowing fits into my life, I plan to go back to school in Canada, with interest in Optometry.