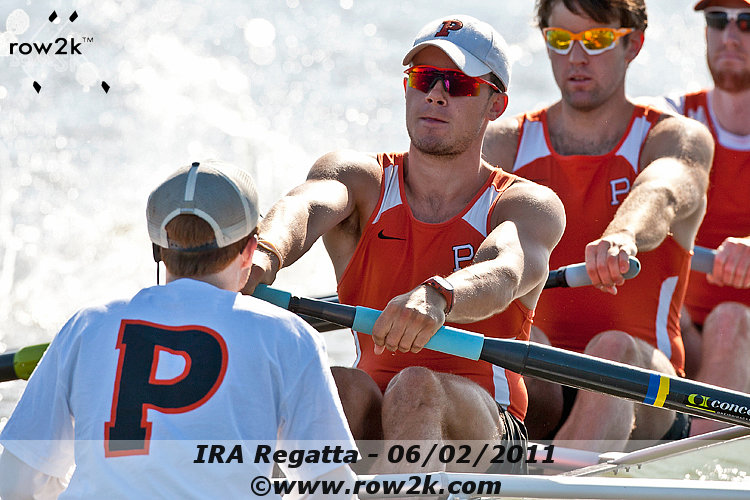 This week's 2012 College Preview interview is with Princeton heavyweight senior Ian Silveira. row2k chats with Silveira about his time on the USA Junior and U23 squads and how those experiences will help him lead the Tigers in 2012.

row2k - How did you get your start in rowing and why did you decide to row for Princeton?
Ian Silveira - Before going to high school I had never heard of rowing and had initially planned on playing other sports. During the first week or so of school one of my good friends at the time told me that he thought I should give rowing a try because I wasn't playing anything at the time. I decided that it would be an interesting sport to try, especially since I had no idea what it was really. I remember after our first practice on the water thinking that it could be something that I would really like to stick with, and see where it could go. The more it I think about it, I still don't really know what made me stick with it. I think it just had something to do with being able to be outside and on the water everyday, something most people don't really get to do that often … As I started to improve more and more in rowing, and it came time to start deciding on colleges, in the back of my mind I always had an eye on Princeton. I had spent some time there during the summers rowing, and I always thought that it was an incredible campus. When I went on my visit I really felt like the coaching staff was enthusiastic about the guys on the team and the team itself. To me, Princeton just felt like it was the right fit, the team seemed like they were a tight group and it was the kind of place that I saw myself being happy to be a part of.

row2k - You've been on the Junior and U23 National Teams the past four years, what did you learn from those experiences that have made you the rower you are today?
Ian Silveira - One of the things I've learned throughout all of those experiences is that every team and every experience is unique in its own way. There really is no clear cut formula for success, and every team and experience wether it be a new line-up or a completely new team is going to find its own way. Learning this has done a few things for me. I think it has helped me to be a more experienced racer by showing me how to adapt to many different situations. I think having had the opportunity to row with so many different athletes, many of which were better than I was, has really helped me to develop my own understanding of both racing and training. All of my experiences have taught me to live and thrive in the moment by taking it all in and enjoying the ride.

row2k - You were in the Junior eight and the U23 quad, do you prefer sweeping or sculling at the international level and what are some of the major differences in the two?
Ian Silveira - There are some major differences besides the difference of the level of competition between the two age categories. One of the major differences that I noticed was the level of competition in the Quad event. It was different rowing in an event that had such a high number of entries. On top of that was the skill level of the other crews when it came to sculling between our crew and the other crews. It was definitely intimidating going up against a crew that has been rowing together for the better part of the year and we had only been together for a couple months after having swept for the whole year. That really added another element to the race that I didn't really think about until we showed up at the course. Its hard to say which one I prefer more on the international level, I think that both have their positives, rowing in an 8 at the international level is a very cool experience, hearing all of the different languages along with the explosion of noise at the start is a cool feeling, but there is something strangely exciting about the silence and tactics of a sculling race. I think I would say I like them both, and really I just like any opportunity to race on the international scene.

row2k - The 2011 quad finished 4th in Amsterdam, the USA's highest finish in that event, what's your take on sculling in the US for London and the next quadrennial?
Ian Silveira - That entire regatta was a really exciting experience for our whole crew. It was a really great feeling sitting at the starting line of the final knowing that we had made it. The year before we had really wanted to get a quad into the final for the first time, but ended up missing out and raced in the B final. Having missed out on that opportunity last year, we were all thrilled at the way we were able to come together throughout the summer to produce a solid result. Having had to opportunity to be a part of the first U23 quad to make a final was a positive experience for me and the rest of our crew, and something I think we would all like to build on.

With the improving success of the U23 Quad over the past couple years and the Senior 4x automatically qualifying for the Olympics this year, I think that the sculling program in the US is moving in a positive direction. The increasing emphasis on the progress of the U23 and Junior levels of sculling is going to have, and already is having, a positive impact on the American Sculling team. London will be a good opportunity for the US to demonstrate that progress, something that I'm sure will continue to grow throughout the next quadrennial.

row2k - What are your strengths as both a student and an athlete?
Ian Silveira - If I had to pick some strengths that I have both as a student and as an athlete I would have to say work ethic and determination. As I am sure is true for almost any student athlete, the ability to stay focused both in the classroom and on the water is an asset that contributes greatly to their success. For me, my work ethic and determination has been the main factors that have allowed me to get to where I am today. Without those two qualities I don't think I would have ever been able to grow as an athlete in the way I have, and I certainly wouldn't have been able to work my way into an Ivy League school.

row2k - How has this season gone so far and what are your goals for the spring?
Ian Silveira - This season has been going well so far. Looking back on our performances this fall, we were a little disappointed with the way we raced at the Head of The Charles, but despite our disappointment it was a good learning experience for us as a crew. With a newer crew this year we just needed some time to figure each other out and really learn how to move well together. I think we were able to continue building on that throughout the fall season and end on a strong note with a good all around team performance at the Princeton Chase. The progress we showed as a team with the way we closed out our season has definitely carried into the way our team has been handling the winter training sessions, and we have been excited with the strides we have been making as a team.

Looking forward to the season, as a team I want to improve on our results from last season. I felt that we had solid performances throughout the dual racing season, but I think as a team there were still some races that we all would have liked to perform better in. Overall I would say that my goals for the season would be, as a team, to improve our level of competition and have some better results come championship racing season.

row2k - What do you like most about the sport of rowing?
Ian Silveira - Other than having the chance to be outside and on a lake or a river all the time, I think the thing I like most about the sport of rowing is the team aspect that is required for it to all work. Having played a couple other team sports, rowing is the only sport where I really feel like it is a true team effort. In other sports a team can win because of one or two standout players, but in rowing that doesn't happen. A boat doesn't win because they have one or two standouts, but rather a boat wins because every crew member works together to make it all happen. I like that success in rowing comes down to the team that works the hardest together day in and day out to make it all work. In other sports it doesn't always seem like thats true.

row2k - What are you studying at Princeton and do you have any plans yet for after graduation?
Ian Silveira - Right now I'm studying Sociology at Princeton. I decided to major in Sociology during my freshman year while I was taking a class titled Sociology of Crime and Punishment. The class is still one of the most interesting classes I have taken at Princeton and because of that I am currently writing my senior thesis on the experiences of prison life. After college I want to try and continue rowing, and hopefully continue rowing at the elite level. As for my ambitions outside of rowing I have thought about the possibility of attending law school, but I am still trying to figure out what I really want to do after college. I have always had an interest in coaching rowing, so maybe there would be a future for me in that, but at this point I'm really just focused on enjoying my senior year and the moments I have left rowing for Princeton. I'm just taking it one day at a time, it's all you can ever do really.