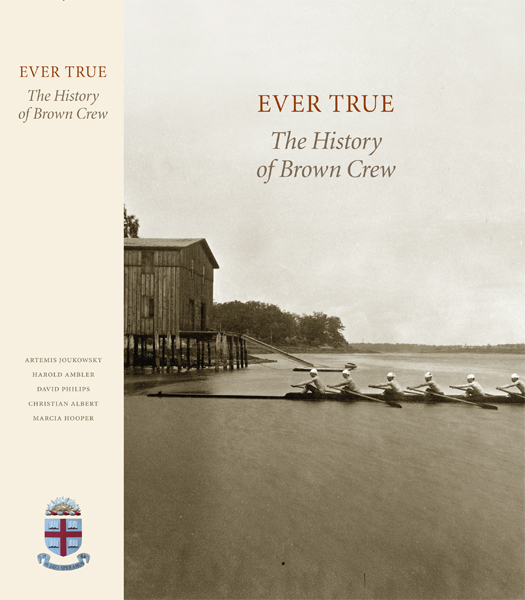 Anyone who has spent a significant amount of time on a rowing team will appreciate the animus behind the newly revised edition of the 2009 book "Ever True: The History of Brown Crew" (Brown University Sports Foundation, 2010); it's a true labor of love by people who feel deeply about the team. The book, co-written by Artemis Joukowsky, Brown Chancellor Emeritus, authors Harold Ambler and David Philips, and alumni oarspeople Christian Albert and Marcia Hooper, is a lucid, engaging history of the sport of rowing at Brown University and offers insight into the growth and personalities that have shaped 'Bruno' until the present day.

The tome is bearish (pun intended, and used without regrets!) at 650 pages; in addition to straight-up narrative and reportage, and sidebar reflections by both alumni and notable figures from throughout the rowing world addressing the role and impact of Brown on the greater world of rowing, the authors have included at the end of the book a near-exhaustive compendium of every known result of every race rowed by the Brown Men since 1859 and the Brown Women since 1974, as well as rosters of all members of the Brown Men's and Women's teams from times primeval through the classes of 2010.

This completeness can appear overwhelming, but the addition of the race results are kind of fun; for modern day, stats-obsessed rowing junkies, it adds to the feel of the book to be able to find the results of the 1875 Varsity Six (sic) race at the "Rowing Association of American Colleges" regatta; indeed, the inclusion of the results places the book squarely among the more comprehensive histories of the sport.

What is surprising to learn from this book, given Brown's modern day status as one of the elite teams at the collegiate level, is that the teams' historical origins are actually very humble if you compare them to most other Ivy League schools, or indeed most historical rowing powerhouses. Brown started a boat club in 1859, catching the "first wave," if you will, of college boat club foundings, then the team petered out after 1885, rowing exactly one race between then and 1949, when Brown's modern rowing team came into being.

The harrowing tale of the restart of Brown Crew would probably be familiar to many teams that have struggled to get going. The story starts with two freshmen in 1947, James Donaldson and Harlan Bartlett. Both rowed at prep schools, and contrive to get a rowing team going at Brown again. Donaldson and Bartlett arrange for a meeting with Brown's president, Henry Wriston, to discuss reconstituting crew at Brown:

"According to Bartlett, he told them that rowing would become a University-sanctioned sport at Brown 'over his dead body.'"

Like so many other pioneers in modern rowing, Donaldson and Bartlett can't and don't take this unequivocal "NO" for an answer; they receive permission to start a club team, pool funds, purchase used eights (transporting them to Rhode Island on top of passenger cars; luckily the book has a photo of this fantastic rig), and pick up steam.

In 1961, Brown accorded crew Varsity status and hired Vic Michalson, a former University of Washington oarsman and ex-Syracuse coach to oversee the next chapter of Brown crew. The book is terrific on the Michalson era at Brown, and illuminates the contributions of one of the seemingly lesser-known "great men" within the sport.

Unlike most of the Ivy rowing programs with longer traditions than Brown, the constant with all changes and upheavals within the history of Brown Crew seemingly revolve around one thing: money. As the university contemplated adding a women's team in 1973, Michalson, who was still grinding away at solidifying the fiscal foundations of the men's team and had resisted adding a lightweight men's team for financial reasons, initially resisted the addition of the women's program as well. However, through the efforts of Associate Athletic Director Arlene Gorton (another extraordinary individual we meet more fully through the book), Brown Women's Crew becomes a reality within the ferment of the early 70s.

"Ever True" also does a fine job addressing the intellectual tradition at Brown, and locates the personalities of the oarsmen and oarswomen in this context; in addition to the writing, the documentary evidence of photos and documents within the book (which is superb throughout) captures this too; a photo of a Brown Men's boat at the 1970 Eastern Sprints, wearing shirts with huge "Peace" symbols in solidarity with students striking after Kent State makes this point explicitly.

As we approach modernity, the book takes us through the Steve Gladstone, Scott Roop and Paul Cooke eras, fantastically successful times for Brown Men's Crew, and the beginnings of the Murphy era for Brown Women's Crew. As is the case throughout, oarsmen and women reflect, alongside their coaches, on the work and the meaning of that work, for the team. (The book also includes, as mentioned above, a series of sidebars by rowing "heavyweights," Mike Teti, Harry Parker, Radcliffe coach Liz O'Leary and others not directly affiliated with Brown, who offer their own comments about Brown Crew; while these sidebars are insightful, they don't add as much to the book as the recollections of those who were "there," in this reviewers opinion.)

In all, "Ever True" wins as both a history with a tight focus (Brown Crew) and the wider lens of the growth of modern rowing as experienced by Brown. Today, Brown Crew seems like it has always been there, and one of the great strengths of this particular book is to illustrate how, even in the Ivy League, rowing hasn't always been the great no-brainer everyone assumes it to be. "Ever True" is a wonderful example of people who are proud of their team's accomplishments taking careful custody of their program history, and sharing it with a wider audience.

"Ever True" can be purchased from the Brown University bookstore in the US, or Richard Way booksellers (UK) elsewhere in the world.