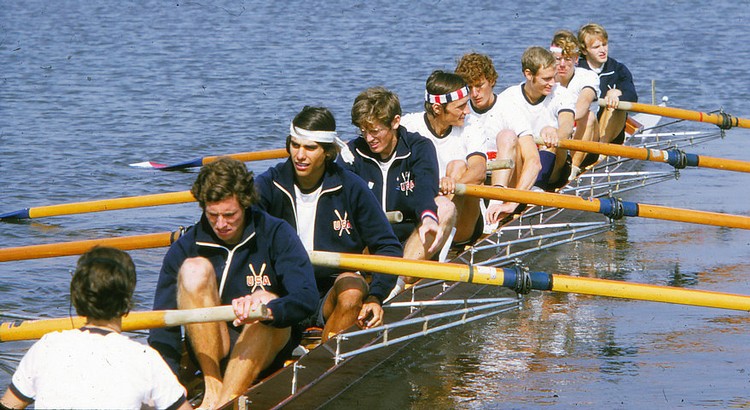 So after the Canadian Henley, how did Moscow turn out? For half a century, what happened to the 1973 U.S. Lightweight Eight at the European Championships remained largely a mystery to most of us. Nobody was talking. No mention of the exhibition lightweight race ever made it into the newspapers, and it still goes unreported on the worldrowing.com website, but now, in response to the posting of this memoir on row2k, several members of the 1973 U.S. Lightweight Eight have begun to reminisce . . .

Coxswain Dick Grossman: "All the crews had agreed upon a day and time for weigh in, which I recall was either 24 or 48 hours before the scheduled race time. We weighed in with difficulty, but we were well prepared and we made it. People remained careful about rehydrating and eating their way back to some semblance of normal.

"It wasn't until we had fully recovered from the weigh-in that we were told the Soviet race committee had decided to hold another weigh-in two hours before the race. We were shocked. There was nothing we could do except to crash and go through it all again. I don't remember the weigh-in, but I think there were people having trouble remaining upright on the scale.

"We didn't exactly follow intelligent weight loss protocol in those days, but when we got to the starting line we at least thought we had somehow recovered from the second weigh-in."

Reading this, any large-ish lightweight rower of any era would have the same sad reaction: End of story, right there; very few crews are prepared for an additional surprise weigh-in at a major, season-ending regatta. 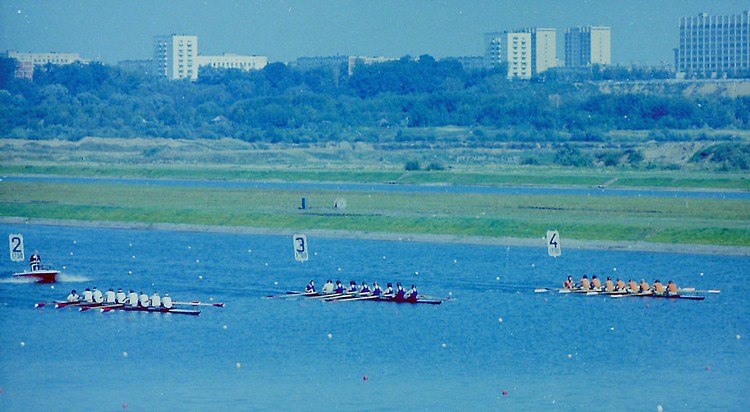 Newly surfaced photos show the three-boat race between the U.S. with bow number 1, the Federal Republic of Germany with bow number 2, and the Netherlands with bow number 3 was run in Lanes 3, 4 and 5 of the 6-lane course in order to avoid the wind shadow created by the starboard shore and by the grandstands at the end of the course. Conditions were fair . . . and far better in every way than for the heavyweight finals at the end of the '73 regatta, which would turn out to be a nightmare.

Dick Ewing: "Having not previously raced in Europe, I did not anticipate what others later said often happened in those days: a jumped start. On the words "êtes-vous" the West German and the Dutch crews were off, not waiting for "prêt", much less "partez!" I, for one, thought they would call them back for a false start, but they did not. We did get off to a good start, but we started three-quarters of a length down. My recollection was that it took us almost to the 1000m mark to catch up and pass the other two crews."

John Malarkey: "I distinctly recall 'running out of gas' in the last 500m and struggling just to keep putting my oar in the water." 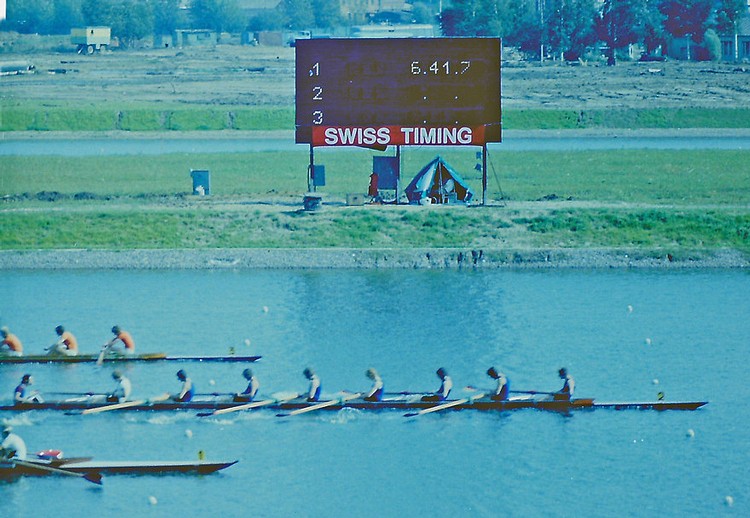 The USA still in second with perhaps 50m to go

Grossman: "We were leading, maybe to the 1500, but we ended up third. We were also last. There were three crews, the Germans, the Dutch and ourselves. While I'd love to claim we won the Bronze, the fact is we lost both the Gold and the Silver. I don't remember who won.

"There was just no way we could handle what we had gone through before the race without paying a significant price. [From my coxswain's seat] I could look into stroke-oar Rick Grogan's eyes. He was hurting in the second and third 500s, but I didn't really see how much until around the 1500m mark, when his eyes started rolling up, his oar was waving around before the catch, and the rate was dropping. I remember yelling to Mic to stroke the boat because Rick was out of it.

"It was the longest and worst last 500 I ever experienced, and the results should have been predictable, but we still couldn't believe it."

It was heartbreaking. They had led well into the last 500, when the wheels fell off. 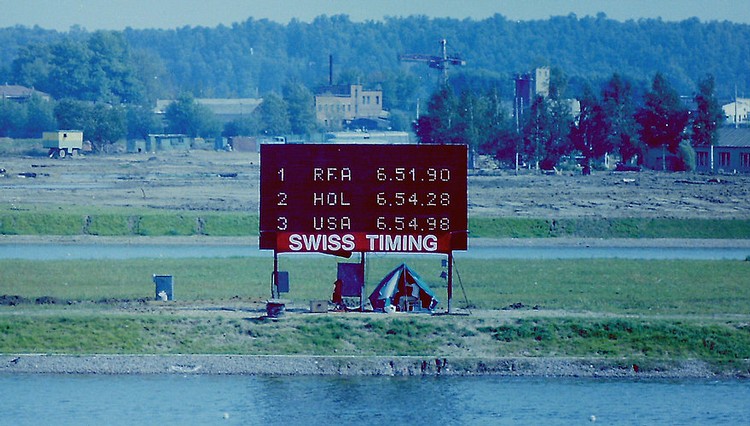 You won’t find this result anywhere on the World Rowing website!

After the race came chaos.

Grossman: "I remember that we had to lift Rick out of the boat and get him on the dock. We carried him to a medical room behind the boathouse, where a Soviet doctor put him on an IV. I remember that Rick was barely conscious by then, and extremely fearful that the doctor would use a defibrillator on him, but it never came to that."

Maxson: "As I recall, Mic Feld recounted some years later, the Russian medical staff did not want to release several of my teammates once they felt ready to leave. According to Mic, he put on a white coat or something and bluffed his way into the medical room as a 'team doctor' in order to get the guys out."

Ewing: "Ultimately, we were a great crew that was just too heavy for the international weight limit back then. It was the last year of 67.5kg (148.8lb) average, 70kg (154.3lb) max. I believe it was the strain of the weight loss that killed all of us in the last 500 meters, though truly, it did not help that we started behind because of the outrageous jumped start.

"To help put this in perspective, I was blessed to be on the 1974 lightweight crew that won the Gold at Lucerne, which at natural weight was an overall lighter crew than the 1973 boat, even though the limit had since been raised to 70kg average, 72.5kg max.

"Had the 1973 crew rowed with the new weight limits, I believe the end result would have been very different."

In addition, after St. Catharines in '73, Pete Billings, who was very light, had been substituted out in favor of Scott Baker, a '72 teammate and former Kentie, who was very good but on the heavy side. Hmm! When it came to the scale, perhaps the boat could have benefitted from a selection strategy that placed value on Billings and/or a guy like Larry Wittig, who would have brought down the average weight a lot for the entire boat!

But beyond the weight situation, surely they would also have benefitted from additional inherent boat speed.

The following is my opinion. Circling back to the choice between objective testing or coach's judgment, I personally believe in seat racing results, especially when they are not close, not even in the same time zone, and I can't help but believe that eight legitimate seat race winners from that year's camp, Larry and Eric and Mark included, would today be esteemed and respected as 1973 European Champions, the first lightweight champions in international rowing history, if only they had been given the opportunity they deserved and earned.

Think about it. "My" Jayvee was quite possibly the fastest lightweight eight on the face of the Earth that year! So there! 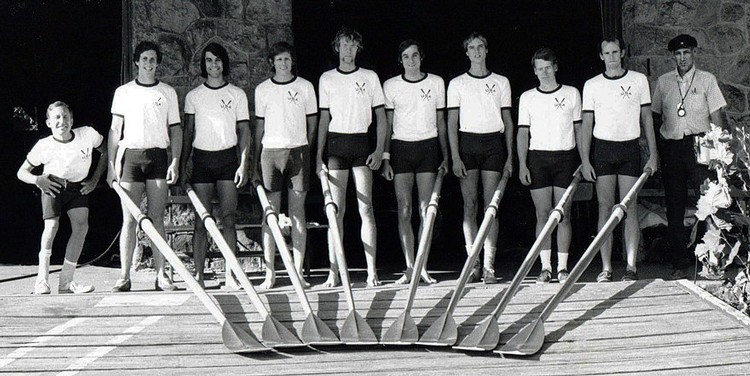 The following year's National Eight included five members from this ill-fated selection camp, including the stern-three from the Moscow boat, and as Dick Ewing mentioned, they did win the 1974 World Championship in Luzern.

Eric Aserlind was on board. In addition, Jim Ehrman along with Pete Huntsman from the 1973 Jayvee were stern pair of the World Bronze medal coxless-four coached by Fairthy Farthington. Congratulations! Good for them all! Proves it could have been done, nay, should have been done, in 1973! 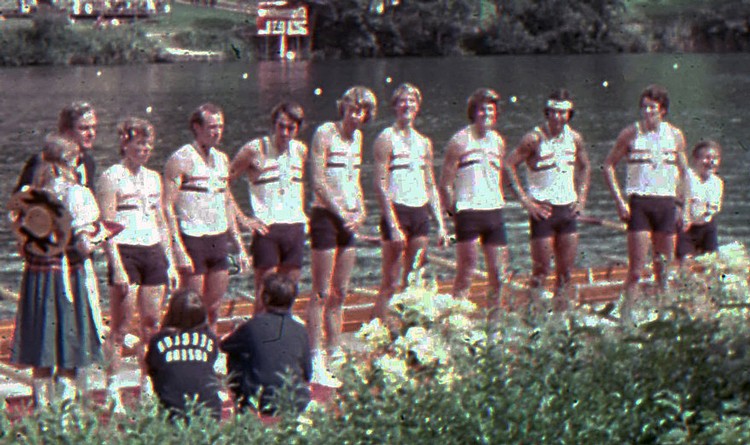 But there was no Mark Davison, no Larry Wittig, no Pete Maxson, tragic heroes all. By 1974, their lives had taken them in other directions, and 1973 turned out to be their last chance at international glory. Isn't life grand?

Maxson: "Frankly, Moscow was such a devastating experience that I wanted to leave it and rowing behind and move on with the rest of my life. Perhaps it even eased the transition to the job I was to start in September to start paying off college loans." 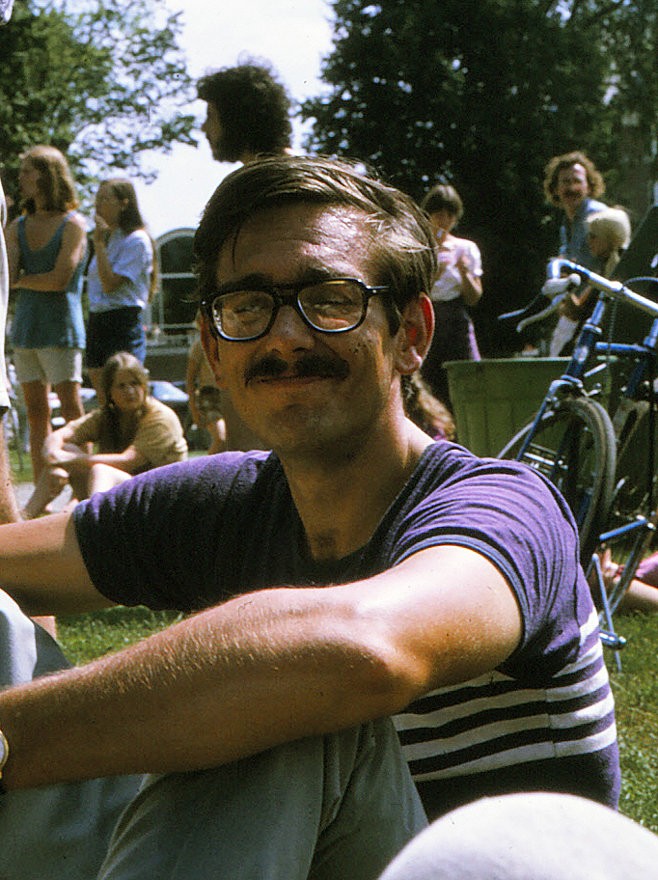 But to my mind the last and greatest tragedy of all in 1973 was Fairthy Farthington himself, for it had been the insight and determination of this kind and thoughtful man that had inspired a whole country. Because of him, beginning in 1972 lightweight rowers had come from East Coast and West Coast and points in between. They were arrows in his quiver, and he should have been the 1973 European Champion Coach. After all, despite his best efforts, arguably the best lightweight eight in the world had been assembled at his camp! He just didn't recognize them.

With all its conventional wisdom and closed-mindedness, it is our sport of rowing that I blame! So many of us continue to suffer from Fairthy Farthington's Disease.

Was I the only one who noticed this ultimate tragedy?

"From beneath his slouched hat Ahab dropped a tear
into the sea; nor did all the Pacific contain such wealth
as that wee drop."
- Moby Dick, Herman Melville