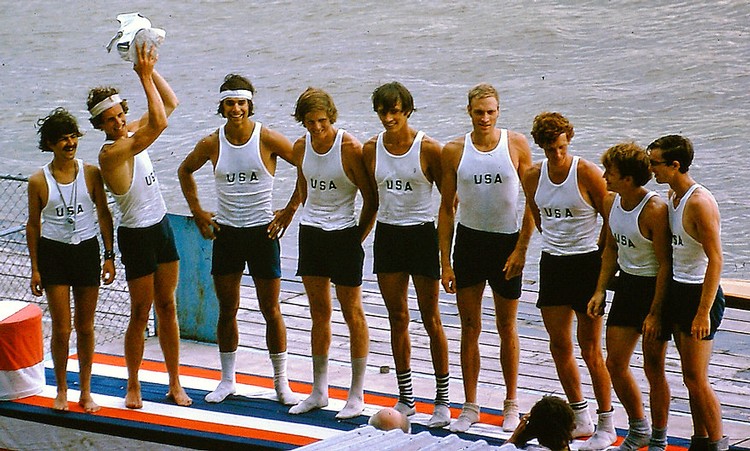 F. Fairthington Farthington has a serious problem. The boat of truly outstanding oarsmen that he has selected is getting beaten by a boat of his rejects. Luckily for him, Steve Gladstone’s heavyweight selection camp is simultaneously being held at Dartmouth, and many of the most respected coaches in America are rolling through town to see how things are going. To Fairthy’s credit, he asks one coach after another to come out in the launch and offer advice while I am completely invisible in the back of the launch and listening with ever increasing fascination.

Every single coach he asks suggests a specific lineup change that would excise one or more of his most favored athletes, preferred against the hard evidence of seat racing, and each time Fairthy would then seek out someone else, soon anyone else. I imagine he is trying to finally find someone who actually agrees with him on his chosen lineup. He never does. Not a one.

After three or four days of advice-gathering, the day comes when Fairthy gathers the entire squad on the dock and announces that he has sought out and accepted the advice of all the great minds of American rowing, and while, of course, they haven’t told him anything he didn’t already know, their collective wisdom has allowed him to come to the inevitable best conclusion a little more quickly.

I hold my breath.

Fairthy moves one guy into the First Boat at 6, but his favorites remain in the boat. Mark Davison leaves the Camp in disgust. Larry Wittig and Eric Aserlind persist . . . but in the Jayvee.

I must breathe again. Fifty years later I am turning blue.

At the end of the announcement on the dock, we shove off and the Jayvee kicks the National Eight’s collective a** one last time. Three lengths. Curvature of the Earth. I secretly rejoice and mourn in a single burst of stomach bile.

Now let me take a moment to say that this narrative is based on my own intense personal memories of how events unfolded in front of my own eyes, but memories are slippery things. Dick Ewing, the fine oarsman who Fairthy had transferred into the First Boat in the 6-seat on that day, tells me quite emphatically that he remembers that after he was switched in, “the first boat separated from the second boat. I don’t recall the margin, but it was distinct. With me in it, the first boat became faster than the second boat.”

I don’t doubt that Dick’s reality is as vivid and meaningful and true to him as mine is to me, but nevertheless I stand by my version. Given this discrepancy, some of you readers may prefer to consider my memoir not strictly as history but as the morality tale that I intended. Back to the story.

From that day forward, I am assigned to coach a very understandably disillusioned Second Boat – and it certainly feels like they are holding me personally to blame for this cluster-you-know-what! Nothing I could say. Fairthy was the coach, and I was his assistant.

Fairthy instructs me to take them downstream of the Dartmouth dock from now on while he and the National Eight practice serenely alone upstream. Simple solution to a complex problem, don’t you think?

Within a week or so I am back at the Royal Canadian Henley, the site of my perfect race, my greatest triumph as a rower (as described in Chapter 15), now seven years in the past, purportedly coaching the National Second Boat though none of them had spoken a word to me for a week. I couldn’t tell anybody that I had had no hand in and did not agree with the boatings as they had turned out. I would not undermine Fairthy.

My stomach was churning 24 hours a day. I wandered around the regatta site at St. Catharines like an old man homeless person, just the way I was feeling earlier that summer when Duvall Hecht walked up and introduced himself.

In my state of turmoil, I must not have watched a single minute of the racing because I have no memory whatsoever of what happened, but The St. Catharines Standard reported that in the Thursday three-boat heat between Fairthy’s First Boat, Mexico and Canada (represented by St. Catharines Rowing Club), the Canadian crew chased the Americans all the way down the course with hardly a deck between them, only to lose in a very tight race.

According to Larry Wittig, who vaguely recalls watching the Friday two-boat repêchage, Mexico held a half-length lead over Canada with 20 strokes to go when one of their oars popped out of its lock, allowing the home team to sneak through and qualify for a grand final rematch with the U.S. on Saturday.

That final was held amidst whitecaps in a stiff following wind. The St. Catharines Standard, ever the reliable cheerleader for the local team, characterized the lanes as unfair: “The Americans held a steady 35 strokes to the minute through the body of the course, coxie Dan Grossman swinging his boat to the sheltered exterior of designated Lane 1. And while the St. Catharines crew faced white water in Lane 2, the U.S. eight made up ground.”

The bottom line was that during the third 500, Fairthy’s First Boat broke open what had been another close race and crossed the finish line with six feet of open water.

Wittig: “Afterwards in Sunday’s [Canadian Henley] Senior 155lb Eights final, we in the U.S. Jayvee were in Lane 6, but in the middle of the course it was game on for Mexico in a race for vindication against Canada. In our boat, Jay [Galeski] called a monster move at the 1000, and we won by a deck open over Mexico with Canada only third.”

So there’s no way to determine with any confidence which U.S. boat might have been the quicker in St. Catharines.

Which begs the question. Did Fairthy get it right when he chose to set aside the seat racing results and pick a first boat of well-tested individuals? Surely one would expect that his boat with Dick Ewing added would smooth out rough edges and get faster while they practiced alone upstream in Dartmouth, but did Fairthy’s all-stars actually have more ultimate potential than the misfit toys who had won all their seat races back in Dartmouth?

Not the first time such a question has been posed in our sport and in life . . .

By 1972 when the U.S started holding national team selection camps, seat racing was considered indispensable. Athletes expected to have an active role in determining their fates on the water without arbitrary decisions made behind closed doors. It was used by Harry himself for selection of the ’72 U.S. Olympic Silver Medal Eight and, as I described in Chapter 29, by Harvard Lightweight Coach Steve Gladstone for selection of Fairthy’s ’72 lightweight squad that would tour Europe. By the 1973 lightweight camp, Fairthy would have had no choice but to employ seat racing, whether he was prepared to trust the results or not.

Harry believed that perhaps the greatest value in seat racing was the elimination of any chance of bias on the part of selectors, but there certainly was another school of thought. The other highly influential American coach during that era was Allen Rosenberg, and the last thing he wanted was to eliminate his own personal judgment from the equation. Allen believed that he could simply look at an athlete rowing and immediately tell if he was moving a boat well, and he believed his judgment was far superior to any scientific testing. One of his acolytes, Hugh Stevenson, went so far as to refuse to submit an ergometer score because he didn’t want to be treated like a lab rat. The result? A 1974 World Champion men’s eight coached by Allen with Hugh rowing 7-seat.

And so there you have it in a nutshell. Rely on objective testing . . . or trust your good judgment? Truly a question for the Ages.

Fairthy’s First Boat Coxswain Dick Grossman: “I've heard discussions for decades now about how much an oarsman contributes to a crew with erg score, smoothness, swing, weight, attitude, etc. Every coach develops tremendous faith in certain rowers based on actual knowledge of what those rowers do every day to make a boat go faster and in what they are able to produce on race day when every stroke is so important. Pete Maxson was one of those rowers and had earned that faith at Princeton long before I knew him.

“We had those discussions [in 1973], but I didn't feel they were overly divisive to the crew. Once the lineup was finalized, I felt people were ready to move forward and go as fast as possible.”