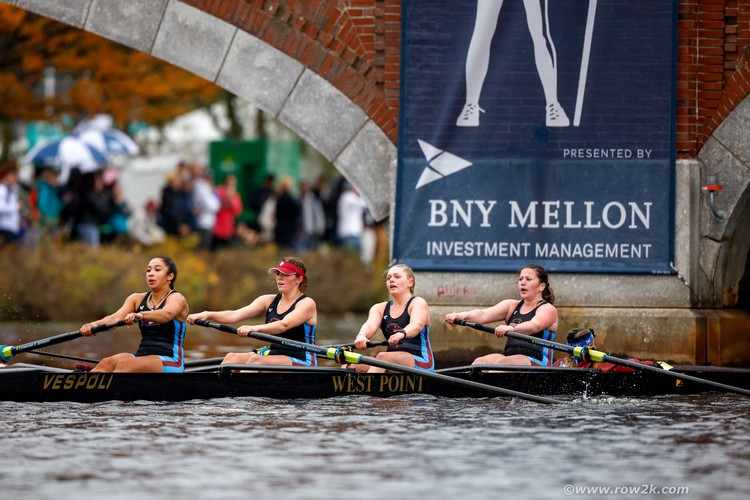 Helen, driving through Eliot at HOCR '22

Next up In The Driver's Seat—-where we hear from the folks who add that extra something to the teamwork of a crew—-is Helen Curley-Swannie.

Helen coxes at Franklin Pierce University, where she is a junior. This fall, she coxed the Collegiate Four at FPU's first Head Of The Charles since 2018, where her crew improved 14 places from their last trip down to Boston.

Let's hop In The Driver's Seat with Helen:

row2k - What are your top three essentials for being ready on Race Day?
Helen Curley-Swannie - Preparation, knowing the weather, and checking my CoxBox.

Preparation: this, for me, is always most important. The week leading up to a race I spend hours watching videos and reviewing course maps. I try to memorize the course the best I can before going out on the water. This way the course is one less thing I have to think about, and I can focus on warming up my crew and our race plan.

Looking at the weather: living and rowing in New England, that is always a surprise. Sometimes you get a 70-degree day in November, and other times it's below freezing in September. A cold coxswain is not an effective one. Being cold takes your focus and energy. I like to check the weather the week leading up to a race. I am also a terrible over-packer, so I am prepared for whatever mother nature throws our way--and, as much as I hate racing in it, my exposure suit comes to every race. 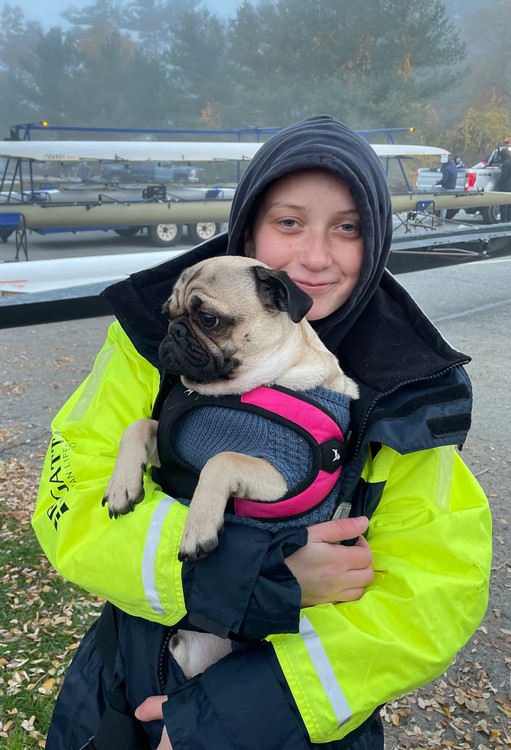 Checking my Coxbox before getting out on the water: while the boat is being rigged, I plug my box in and check it, and quickly check again before going out on the water. My coach was the one who first told me to start doing this. At first, I thought he was crazy, I mean why would they just stop working and how often do you get into a boat and have your box not work? Well, I learned my lesson the hard way the first time I ever went out on the Charles River. We were practicing on the Friday before The Head of the Charles and we were waiting in the traffic to get through the first bridge to get to the start and my box stopped working. The first time ever being on the Charles, and I had a box that was cutting in and out. Thankfully I had an amazing bow seat who was yelling what I was saying to the rest of the boat. Moral of the story: check your CoxBox. It takes less than a minute and could save you a lot of frustration.

row2k - What is your favorite drill to run with your crews? Any tips on how to the drill well, for maximum effectiveness?
Helen Curley-Swannie - My favorite drill doesn’t have a name but it’s pretty simple. Over 10 to 15 strokes you have your crew row as high and fast as they can. We usually end up somewhere in the 60-strokes per minute rate range.

It helps the crew realize how much time you have to take a stroke so that, when you go back to race pace at a 35, it feels almost like slow motion. Plus it’s just fun. The first time my coach had us do this on the water we all thought he was joking. It usually takes a few tries for the rowers to get comfortable and to trust each other. 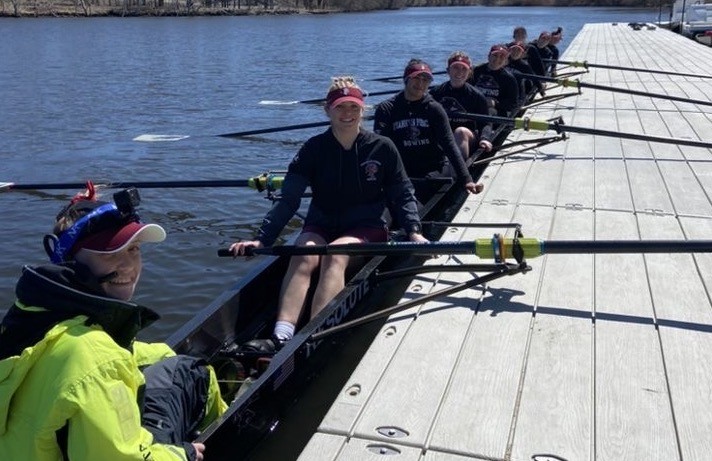 row2k - What's some of the best coaching advice you've received about your coxing?
Helen Curley-Swannie - Some of the best coaching advice I ever received is to not stop talking. When I first started, I would overthink what I should be saying so much that I’d stop talking all together. That’s when my coach told me that I just needed word vomit. Your crew isn’t going to remember every little thing you say, but they are definitely going to remember the silence.

That’s where the word vomit comes in. I quickly learned that I don’t always need to be saying the exact right thing at the right time for a whole race, sometimes my crew just needs to hear something other than their own breathing for a few strokes.

row2k - What is a mid-race call or move that you've made that you'll remember for the rest of your life? If so, what did it involve and how did you call it?
Helen Curley-Swannie - One call that I make frequently is calling for the team. When I start to feel a lull in the boat during the race, I call strokes for each person in the boat. Sometimes people need to pull for a reason bigger than themselves. Whenever I get feedback, these calls are always mentioned as a favorite among the team.

row2k - Can you tell us anything about how you learned how to steer straight?
Helen Curley-Swannie - Honestly, no. When I first started, steering straight was just about all I could think about on the water. Over time, it just started to naturally happen and now it’s not something that I have to constantly think about. I truly think it’s something that just takes practice and time, and one day you go out on the water, and it just comes naturally. 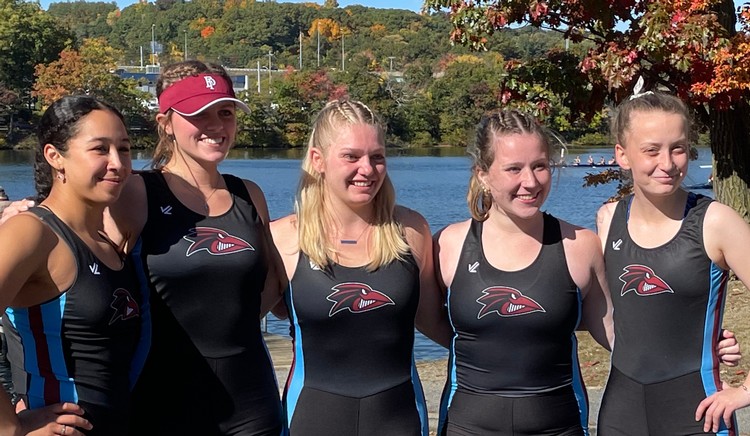 Helen, far right, with her four this fall (photo thanks to Helen Curley-Swannie)

row2k - Tell us about the best race/practice you've ever had?
Helen Curley-Swannie - The best race, and one that I will remember forever was my first collegiate race.

Due to Covid our team faced many adversities, including not having a full-time head coach for over a year. On top of that I had also had major knee surgery just 4 months prior. I didn’t think I would get the chance to race at all that season, let alone in our first race of the season.

It was a dual double meet, and the crew had already raced once that day with a different coxswain. Out on the water at the start, it was windy: white caps almost coming into the boat windy. I was terrified.

We started the race and stayed in line with the other boat. We started to make our move just about halfway through the race and, as we pulled away from them, my stroke seat quickly said at the catch “open water.” I turned my head and saw she was right. Then, after I made the call that we have open water, I swear we flew to the finish.

Once we crossed that finish line, my stroke seat burst into tears. For just about all of us, this was our first collegiate spring race, and it was also the first race that we had ever won. The energy in the boat was electric. I didn’t think I would even be able to get into a boat that season, let alone compete and win.

Thanks for riding along with Helen -- and, remember, this column is open to all "drivers" out there, so if you are an experienced coxswain at any level--from juniors to masters--and would be willing to invite row2k to join you in your ride, just contact us here. We’d love to hear from you about what you see from the Driver's Seat. 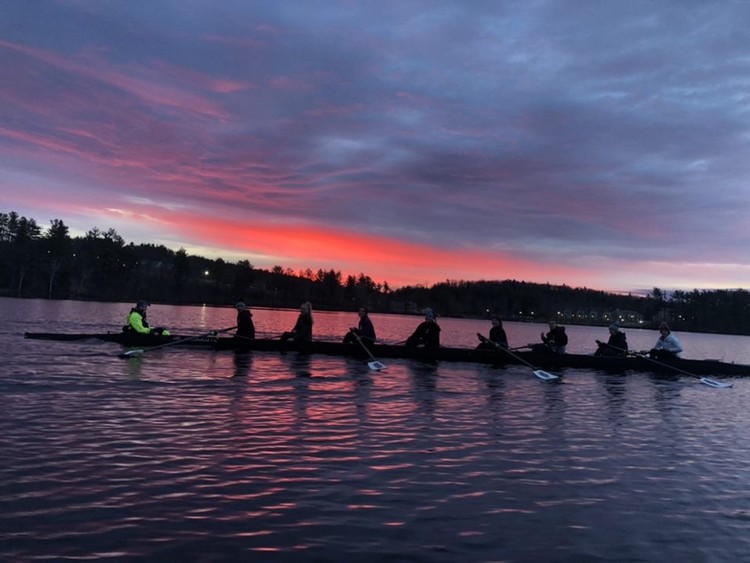 In the Driver's Seat, with Chas Knittel

In the Driver's Seat, with Meagan Meldrim