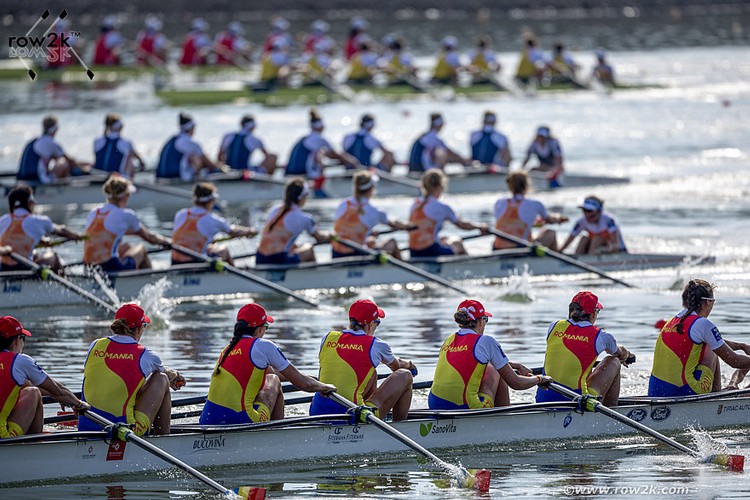 The Women's 8 with Romania in the foreground, 2022 World Championships

One aspect of the stroke that is central to boat speed and yet counter-intuitive to so many is light catches. As I get older and sadly lose power, I rely more and more on my ability to row efficiently, particularly in trying to minimize any negative effect I have on the boat. Light catches are critical towards this effort; and yet as we try to row with more power we inevitably check the boat more, so how can we reduce this checking of speed in order to maximize our average speed?

The hull slows down as we approach the catch because we are stopping our mass moving towards the stern by putting pressure on the foot stretchers. This will start to happen at the moment the Achilles tendon becomes fully extended and the heels start to lift off the foot boards. Pressure is starting to build on the toes against the foot stretchers. This force is in the opposite direction of travel and will slow the boat (every action has an equal and opposite reaction). 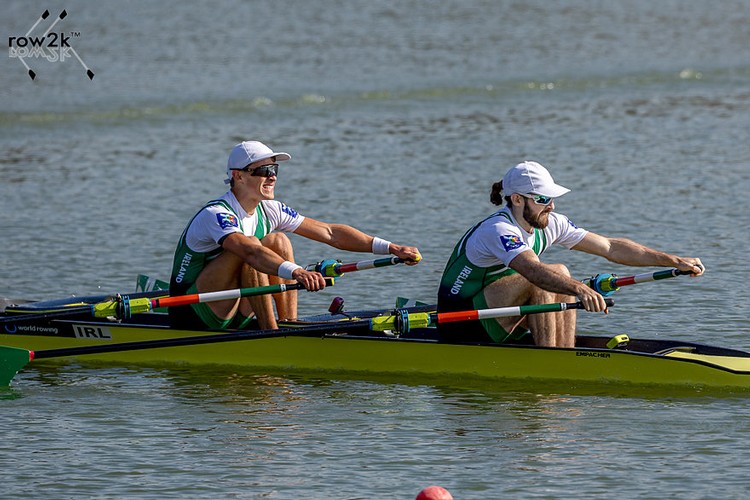 Obviously we want to reduce this backwards movement as much as possible, but how? Simply, the blade has to be in the water before too much pressure is put on the foot stretcher. If you watch the best rowers, the blade takes almost no time to get buried at the catch and the body and legs have made little to no movement during that time.

The hatchet blade is ideally suited to picking off the catch. It doesn't take much lift of the handle to get part of the blade covered and therefore get some pressure on the face of the blade, which will allow us to get pressure on the pin. The hard part is how to do this without putting a lot of weight on the foot stretchers first

Remember that during the recovery you are moving your mass in the opposite direction of the boat allowing it to go faster. Then you have to stop your mass and start back in the other direction. It gets even more complicated because before you get any weight on the oar, the blade face needs to be moving faster than the boat is already moving.

An analogy is to look at it from the perspective of your body in a standing position. If you slowly squat down and then slowly come back up, you will feel some weight on the soles of your feet. If you drop down more quickly and try to accelerate back up, you will feel a lot more weight. The same thing happens along the horizontal plane in the boat. As the stroke rate comes up, you are moving faster and putting a lot more pressure on the foot boards.

For that reason, we don't talk about kicking or slamming the legs down. Too often we are focused on the legs instead of making sure that we have something for the legs to drive against. Without the blade in the water, the boat will literally move backwards as we put pressure on the foot plates. We need to anchor the blade in the water to counter balance the pressure on the foot stretcher.

To try to alleviate this pressure as we approach the catch, we talk about floating into the stern, or tip-toeing into the stern, or sneaking up on the catch, and then anchoring the blade. I try to get the blade in the water without, so to speak, the boat knowing I got it in. How little can I negatively affect the boat at the catch? Another tip is to try not to think of yourself as moving to the stern but rather allowing the hull to come to you. We are simply getting our feet out of the way, allowing the boat to flow forward. 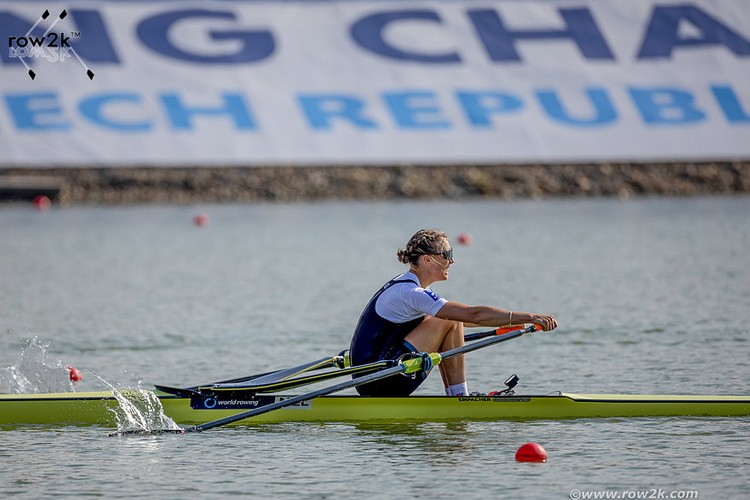 The first is to simply get in the habit of starting at the catch whenever the boat is at a dead stop. As you start moving your mass to bow, you should immediately feel resistance on the face of the blade as well as pressure on the soles of your feet against the foot stretchers. There should be no jarring or jerking of the boat. You then want to try to replicate this feeling every drive as you start rowing continuously.

The second drill is a finish to catch drill. It is exactly as it sounds. A stationary drill, you sit at the finish and then move to the catch, stopping immediately after the blade is set in the water. There should be no drive, no motion of the legs or body towards bow, minimal pressure on the foot plates. The catch here literally becomes the end of the recovery.

Think body, slide, catch and move the blade to the water as you come up the last inch of the slide. Repeat this drill a few times and then when you move to continuous rowing, try to keep the catch just as light with no emphasis on the drive until after the blade is set. It should almost feel as if you're pausing after the catch and before the drive.

As part of the drill, you might even want to let the blade float through the first few inches of the drive before engaging the legs. The goal of the drill is to make a break between the catch and the drive knowing that as we go faster and harder, this break will get smaller and smaller but always trying to keep light on the foot stretchers until you feel weight on the oar. Then it is okay to accelerate your mass, trying to put as much force on the oar for as long as possible.

It will take a lot of practice but when you get it, you'll gain more speed with less effort.

This video of the Men's 1x at the World Championships is a great example of light catches. I especially like Ollie Ziedler, the 2019 and 2022 World Champion. So much power and yet such a light, almost delicate catch.