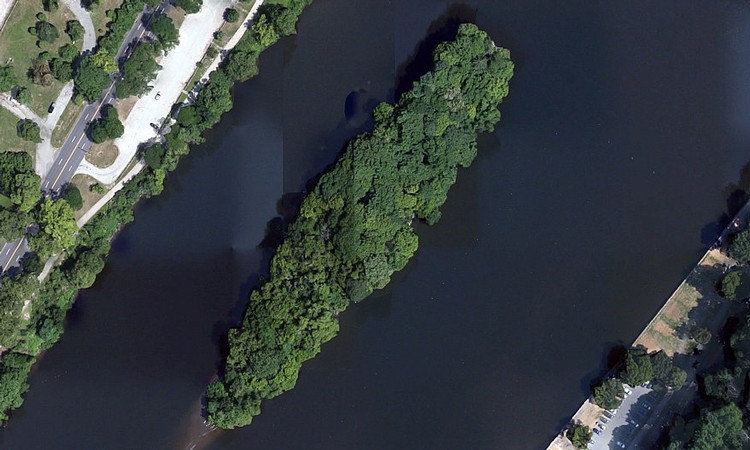 This non-linear tale moves to a bitter-cold midwinter morning just half a year earlier than the 1972 Nationals that I had begun to describe to you in the previous chapter. I in my single am the only boat on the Schuylkill River as I row upstream all alone at my anaerobic threshold, death from hypothermia, not to mention drowning, lurking just inches away, just below the surface I glide over. My starboard blade is less than three feet from the vertical stone wall that encases Peter's Island.

Unbeknownst to me as I blast along, relying on my meticulous memory of the river to navigate without ever looking around, I am sneaking up on and about the scare the Hell out of a resident Canada Goose. My bowball gooses the gander, leaving its rather ample body careening between my quickly advancing hull and the Peter's Island wall. I hear splashing, beating wings . . . very loud and very close.

Suddenly, WHAP! The twelve-pound goose fuselage hits me full tilt on the side of my head. All its other paths having been cut off by Peter's Island, the bird has flown straight into me and nearly knocked me out cold.

Somehow I hang onto consciousness and live long enough to learn that six months later I have indeed drawn an unprotected Lane 2 in my 1972 U.S. National Championship Lightweight ¼-Mile Dash final.

Now in Philadelphia, Lane 1 is on the river's eastern bank next to the grandstand, and Lane 6 is all the way over next to Peter's Island. The island is long and thin, covered with trees, and stretches from the quarter-mile post all the way until about 150 meters to go before the finish line. For the island's entire length, the boat in Lane 6 rows only a few feet from the island's vertical stone retaining wall, and in a crosswind from the west, Lane 6 is completely sheltered.

Not so for my Lane 2. Oh no! No shelter. None. And as we line up for the dash final, there's a crosswind from the west. Big one.

The start commands come in French, in honor of the fact that the first Olympic Regatta was held in 1900 in Paris. Êtes-vous prêt? (No, actually I'm not ready, but thanks for asking. Can we talk about this? Can we put this off for week? Tomorrow morning early will do.)

Dr. Larry Klecatsky, a true sportsman all the time but a lucky son of a gun at this particular moment, is in the smooth, sheltered water of Lane 6, and of course he's out on the field, just like he was in my distance heat. Some new guy named Ted Van Dusen - rowing in a boat, get this, a boat that he built himself in his basement! - he's taking full advantage of Lane 5, and he has me by a length. I'm floundering and feeling sorry for myself, but somehow I'm ahead of everybody else. 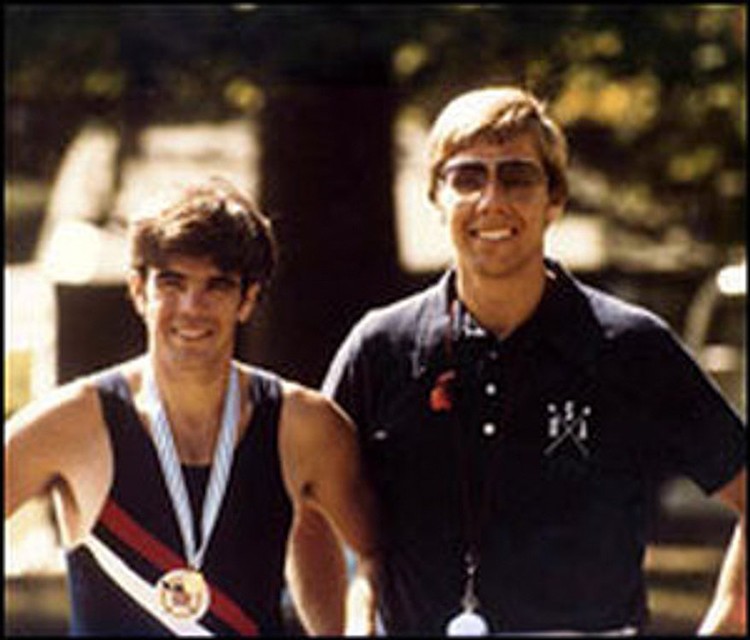 Bill Belden and his coach, Bill Mastalski, in 1974

Bill Belden, my respected friend and worthy adversary who beat me by two feet just last year, at least he's in Lane 1, even worse off than I am. Perhaps there is justice!

End of Peter's Island. No more shelter for anybody. Now at least we're all floundering. Twenty strokes to go. Let's get this over with. I've got to go give myself another swirly, get on a plane for Europe and drive around and rig boats for all my teammates who know what a boat stopper I am.

I wonder if everyone else is . . . Hey! What's got into Bill Belden? Bill bursts by me. He's caught Ted! Can you believe it? He's even caught Larry! Bravo Bill! Today you probably remember your 1974 World Lightweight Singles Gold Medal on the Rotsee in Luzern, Switzerland. Me? I remember your 1972 dash. Belden's Law must be: To Hell with Mallory's Law! Good for you, sir!

I go to Europe no closer to an answer as to how best to move boats, and after a month of very tough racing I return to a new milepost in my life's journey. My 1972-73 freshman lightweight squad contains my first boat stopper: big, strong, committed . . . and slow. As I write this book, I have his name in my daily journal on a shelf somewhere, but I don't dare look him up. I'm too embarrassed, for now it is I who has to mouth the words that once came out of the mouth of Fred Leonard, that just last summer came out of the mouth of Steve Gladstone.

In three years of coaching I have never seen even one experienced rower come to row for me at Penn. Taught every one of my guys how to row from scratch. At the end of this, my third season, my First Boat enters the Eastern Sprints undefeated and rowing in a German Karlisch shell so hard to balance that the Varsity and Jayvee Eights have shunned it for almost five years, back to the Lehman/Ingersoll 1967 Varsity, for Heaven's sake. Getting that Karlisch ready to race has taught me a great deal about rigging, and my guys love the boat.

I get to view us win our Sprints heat in Worcester from the vantage point of the following launch. You see, they had broken a center bolt - déjà vu alert! - and after hearing about what happened in 1971, they are terrified to proceed without my okay. Given that our Karlisch is the only one at the regatta, practically the only one in the whole country, the officials actually bring me to the start line to have a look-see. I fix the problem in short order and reassure the guys.

A lovely sight then unfolds before me. We take the lead immediately and row unchallenged down the course. One official makes a point of complimenting me on the surprisingly impeccable steering of our coxswain. 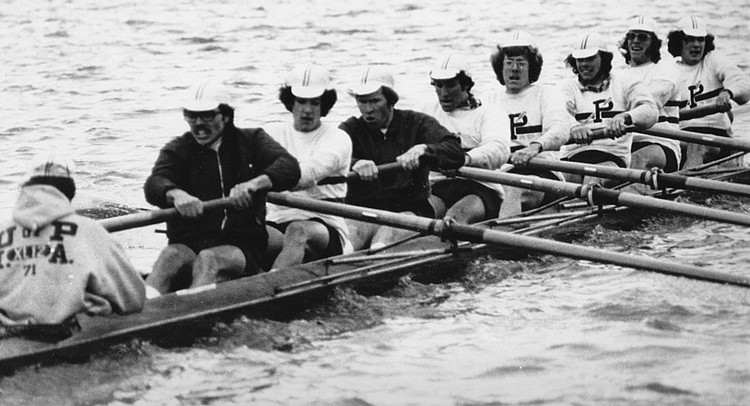 And why is he so surprised? Well, we are being steered by Galen Rogers, the first female coxswain in U.S. history ever to compete in a male college championship rowing event.

As I recall, she earned that distinction by about fifteen minutes, the advantage of rowing in the first heat of the first event on the first day of the first major championship of the year, but precedent is precedent, and I remain very proud. True to form, I bask in her reflected glory.

Finals in the afternoon. Clouds had threatened all day. Five minutes before and five minutes after the freshman lightweight final the winds are dead calm. Dead Calm! Water smooth as glass! During our freshman lightweight final, a line squall brings 30-mile-an-hour gusts and crashing waves. From the first stroke we flounder in our unsteady Karlisch. A relatively unremarkable crew from Harvard in a stable, reliable American Pocock racing shell, holds us nearly even for 500 meters, takes two seats by the 1,000 on a small crab by us . . . breaks it open to three-quarters of a length on a Hellish second crab in the fourth 500, and we collapse, badly beaten by the finish.

Tempestas, vengeful Roman Goddess of storms and sudden weather, definitely must have it in for me, don't you think? You've got to admit! I really have had more than my fair share of bad fortune, and a fair portion of it weather related, as I think back.