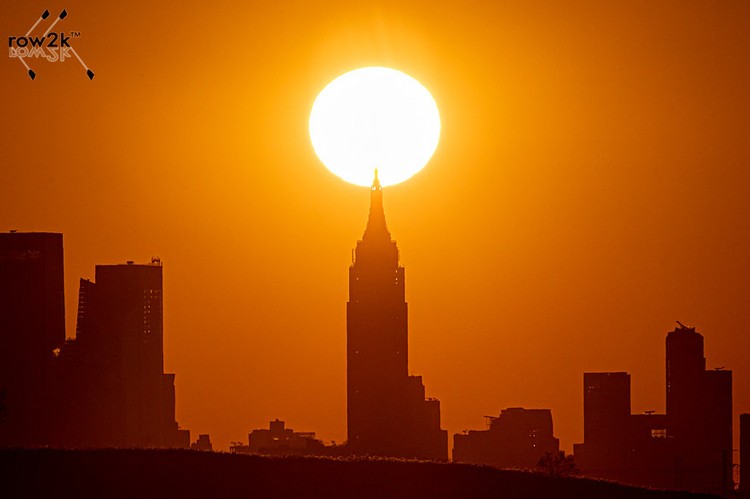 The sun rising atop the Empire State Building, photo taken on the drive to the Head of the Passaic

The Senate passed a bill last year that would establish Daylight Saving Time (DST) as the permanent, year-round standard for the United States. The bill has stalled in the house, but if passed, when you ‘Spring Forward’ this coming March, it could be the last time you have to adjust your clocks for a time change, ever.

But for many rowers, as well as many Americans, they got it backwards; people living on the western edge of the time zones, as well as educators, health professionals, sleep scientists, farmers, parents, and for sure rowers who practice in the morning before work or school would strongly prefer Standard Time to be the, well, standard time.

The main factor at issue is that time zones are actually pretty big, so a sensible sunrise and sunset time at one extreme of a time zone is a very difficult puzzle.

Meanwhile, in Boston toward the eastern side of its time zone:

Other times zones behave similarly, with very late sunrise in the western extremes.

Pacific time is probably the least extreme, but it is still no joke; Seattle's latest sunrise would be 8:57am.

Obviously sunset times are affected as well, with the tradeoff being longer afternoons and evenings, which are attractive to most folks – very few complain about a bit more light in the afternoon and evening, especially high school and college rowers who practice in the afternoon – but it requires a difficult trade for sometimes long, dark mornings.

I won’t go into all the various sunset times vs. sunrise times, as a fascinating series of maps in this article show several permutations of sunrise and sunset times as well as people’s preferences one way or the other.

Maps Show Where Mornings Would Get Darker Under Permanent Daylight Saving Time.

But one thing is for sure, DST will be gnarly for many - according to the article, if you live in Williston SD and wake up at 7am, you would be up before the sun 240 days of the year under permanent DST.

Lots of studies indicate that the best thing for humans would be to stay on permanent Standard Time; evolution dictates that we still do live mostly by the sun, especially when waking up, and permanent DST dramatically undermines the ability to do that – folks at the western edge of the time zones would be at work before the sun rose for weeks on end.

Why daylight saving time is worse for your body than standard time.

Permanent DST has been tried before, and didn't go well: What Happened the Last Time the U.S. Tried to Make Daylight Saving Time Permanent?

All of this underscores why this has been a tough nut to crack; I dunno, the more you look at the numbers, the more you might edge toward ‘keep the twice-annual time changes.’