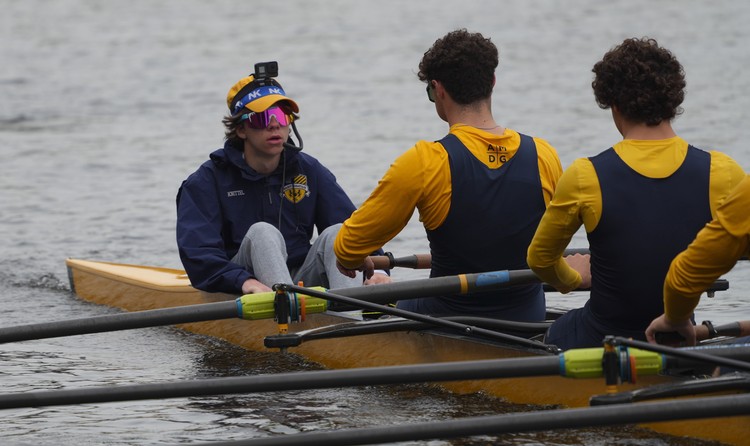 Next up In The Driver's Seat--where we hear from the folks who keep the shells straight--is coxswain Chas Knittel.

Chas, in his senior year with the coxing the 'Wildcat Navy' at St. Ignatius in Cleveland, Ohio, has been at the tiller on the Cuyahoga River since freshman year.

He won the 2022 Midwest Scholastic Championship with the Wildcat's Junior Eight, and stepped up this fall to the varsity boat for the Charles, steering his way to 21st place out of 90 entries in the Youth Eight.

Let's hop In The Driver's Seat with Chas:

row2k - What would you say are the top three most important things for becoming a successful coxswain?
Chas Knittel -
Confidence - In order to be a successful coxswain who makes his crew go faster, this one is a non-negotiable. Your trust in yourself is just as important as your rowers' trust in you as their leader. The level of confidence that a coxswain has directly correlates, in my opinion, to effectiveness at practices and in races.

Poise - This one goes hand-in-hand with confidence. You must have sufficient confidence in yourself to establish poise, meaning your ability to "roll with the punches" and keep a practice/race running in the face of adversity. Poise is especially important on the Cuyahoga River, where all kinds of traffic passes through and conditions aren't always the best. Too many times I have witnessed (or been in!) situations in which a coxswain fails to keep their own cool in difficult situations, and that causes the rowers to become restless as well. I think for any successful coxswain, poise is an essential: coxing is not a formulaic "rinse and repeat" skill. Adaptability to different situations your crew might be dealing with will carry you a long way in this sport.

Coachability - For a lot of coxswains, our first experience with the sport is our first year of high school. Coming into a sport like this, where everyone around you is just as new as you are, it is important to take your time learning. Most teams have coaches who have been with the sport for years, and know how they want their coxswains to operate. For me, one of the biggest ways I have tried to demonstrate my coachability is by religiously recording every race I cox on my GoPro, along with important practices. More experienced people in the sport, even if not directly your coach, will always be a huge help in improving your abilities. 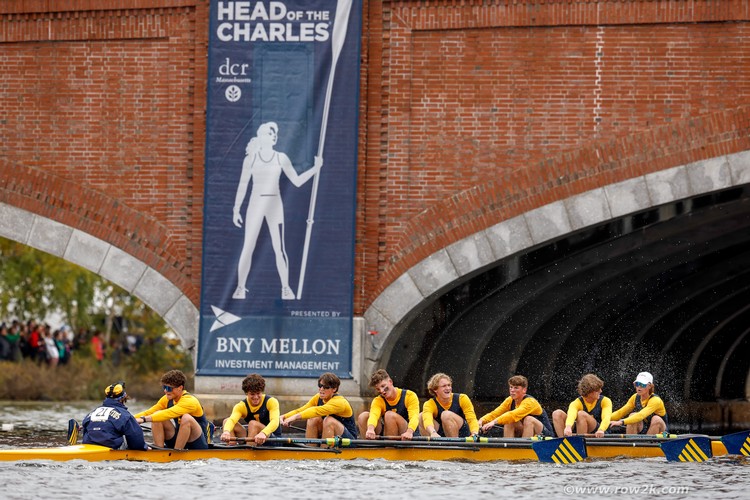 In this drill, all eight will build up to paddle pressure before launching into three consecutive tens. The first ten focuses on only applying pressure on the first half of the drive (i.e. from the catch to about half slide), keeping the finishes very light. The second ten flips this, asking for no pressure at the catch but, instead, all pressure diverted to the second half of the drive and the finish.

The goal is to establish each part of the drive individually with full pressure, before the last ten combines the two and is, in essence, a power ten. The result is almost always an incredibly focused, powerful ten which often leaves us wondering "Why can't we always row like this?"

For maximum effectiveness, this thirty stroke drill needs to be done as one ten after the other, with no strokes in between. To emphasize the changes the rowers are making, they have to be sudden but still expected. A simple "in two, only finish pressure" suffices once your crew knows the drill. 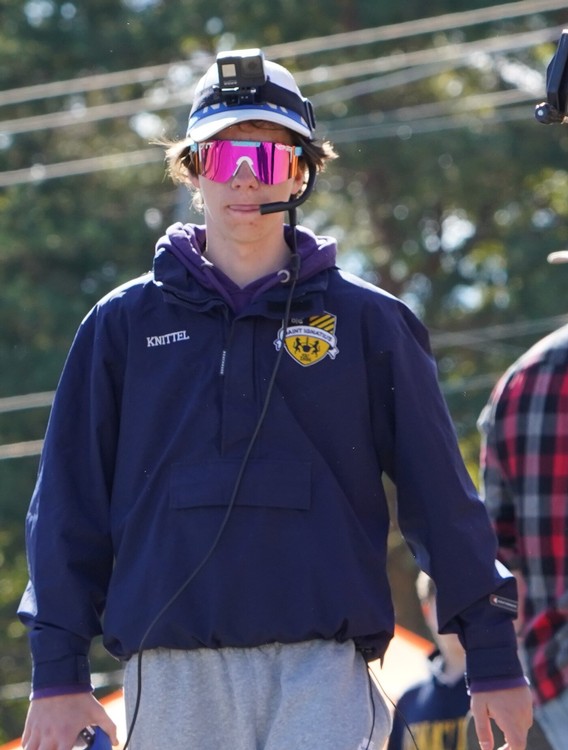 After my Junior year fall race on our home course, at the Head of the Cuyahoga regatta, I had shared my recording with him, and his message to me was clear: "Make everything you say have meaning."

Before that moment, time fillers had been something I heavily relied on, especially in head races. Having to be constantly motivating a crew for 15-20 minutes is difficult.

It is better to be silent during a race than talk the whole time, saying nothing of substance.

row2k - What is a mid-race call or move that you've made that you'll remember for the rest of your life? If so, what did it involve and how did you call it?
Chas Knittel - I made a call in the SRAA nationals this past May, right at our sprint in the heat. We had talked about it before, and the call was "Blackout." To call it, I built up to it by bringing it up and then raising my voice to make the intensity of the call what it needed to be.

Basically the principle is to push so hard through the finish that you black out. After calling it, we walked away from the other crews and won our heat. 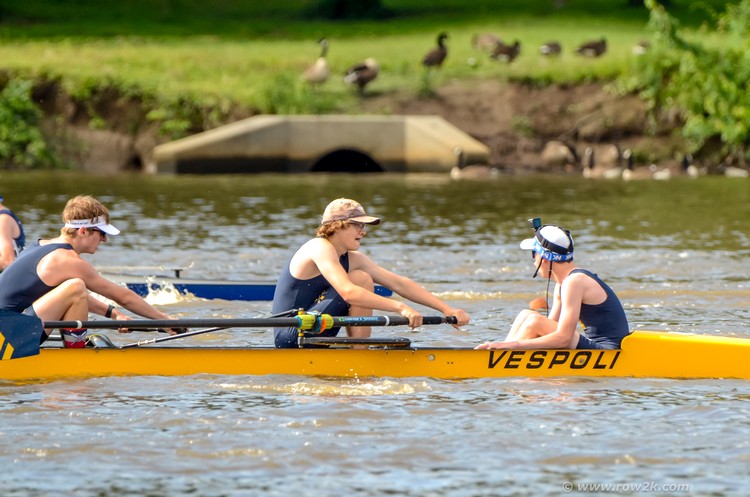 row2k - Can you tell us anything about you learned how cox to a land practice or erg tests?
Chas Knittel - Energy is the most important thing.

On our team at Ignatius, we do our erg workouts and winter training in an attic-type room in our athletic complex. The room is big enough for all sixty or so varsity rowers to work out at the same time, so being able to motivate all of the guys at once is a big ask.

I have found that the strategy of coxing one guy at a time can be inefficient, especially with such a big team. One thing that I really try to do during land practices is to be as energetic as possible.

Our team's coxswains usually call the warmups for 2k tests and other high-intensity pieces as well, so at that point it is important to keep everyone calm but focused, especially during 30+ minute long warmup. During the actual piece is when I try and let loose. Running around, pumping the guys up is infectious, and especially with some loud music blaring, we see a lot of improvement on our erg tests. 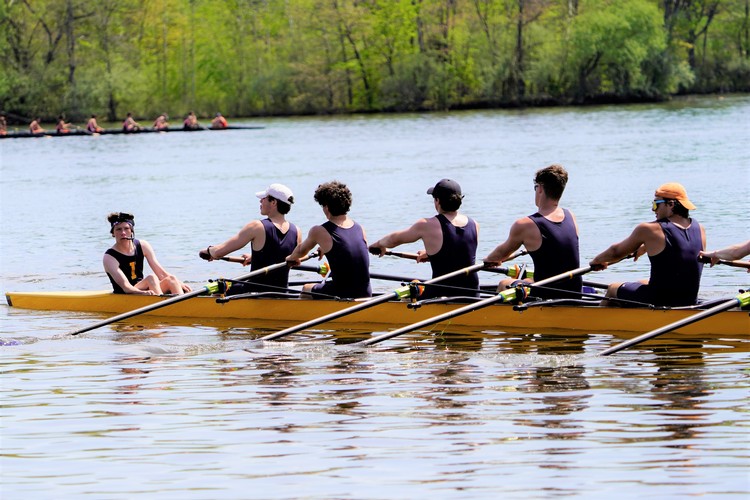 row2k - Tell us about the best race/practice you've ever had?
Chas Knittel - My best race to date was my junior year Midwest Scholastic championships in May of 2022. I coxed our team's Junior 8+, and we ended up winning gold.

We got out insanely fast from the start, walking through our biggest competition--New Trier--within ten or so strokes. From there, we flew down the 1500 meter course to capture the win, which ended up being crucial to our team's Midwest Team Points effort.

row2k - How about the worst race/practice you've ever had?
Chas Knittel - The worst practice I've ever had was in my sophomore year spring. I remember it clear as day, even almost two years later.

We sent four of five of our eights out on Lake Erie, and my boat was composed of mostly juniors and seniors, with a couple of my sophomore teammates there as well. The stroke seat, one of my close friends to this day, was in my grade. We were losing our pieces, I couldn't steer in a straight line to save my life, and the whole boat was generally irked. My stroke seat was probably the most annoyed of all of them, and boy did he let me know.

I genuinely considered quitting the team that evening, easily the closest I have been to making that decision. Fortunately, we moved past it and are now chasing a national championship together.

Thanks for riding along with Chas -- and, remember, this column is open to all "drivers" out there, so if you are an experienced coxswain at any level--from juniors to masters--and would be willing to invite row2k to join you in your ride, just contact us here. We'd love to hear from you about what you see from the Driver's Seat.

In the Driver's Seat, with Meagan Meldrim

In the Driver's Seat, with Jack DiGiovanni