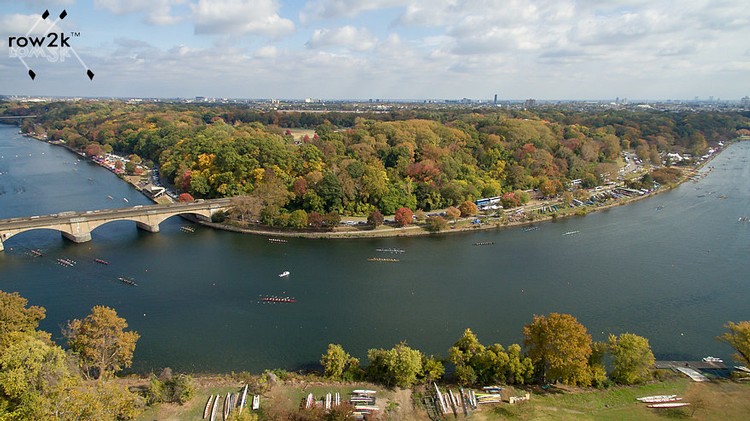 If you come through the bridge on the left on the outside of the crew ahead of you, it's best to own it - there is nothing they can do to let you by

Simply, the overtaking crew put themselves on the outside of a turn, which left the other crew nowhere to yield save for going off the course or stopping, neither of which is allowed or required.

Of course, in many of these situations something happened earlier on the course that created the problem, and perhaps may have been the doing of the slower crew - for example, maybe they had been failing to yield for 2000 meters already - but at some point you have to realize they have nowhere to go and simply cannot yield.

This scenario can be even worse on a course with multiple turns in different directions; I once saw an overtaking crew take the inside of a turn to starboard, which was followed 1200 meters further down the course by a turn to port. The slower crew dug in to try not to let the passing crew get by them, which is absolutely the point of head racing - but the overtaking crew, now finding themselves on the outside of the next turn and unable to pass completely, simply yelled YIELD!! over and over. Again, there was nowhere to yield to; the slower crew was right along the port buoy line and really pretty close to crews rowing up to the start in the travel lane, and simply could not move further to port.

In this case, the overtaking crew rammed right up into the slower crew, blades over the stern, ,and slammed the coxswain with an oar, breaking the coxswain's shoulder blade.

The overtaking crew then went to officials and wanted the coxswain they had put in the hospital disqualified- although the entire altercation was due to the overtaking crew failing to account for the second turn to the other side of the course.

At regattas where there are umpires all along the course, instances like these often result in 'aggressive steering' penalties for the overtaking crew, and rightfully so.

All of this is why the favorite story of so many coxswains and coxless-boat steerspersons is when they told their crew to paddle in order to shift their bowball into the preferred position for an upcoming turn.

(PS - related but different - if you are 4-5 lengths behind a crew, it's not time to start yelling YIELD! - per above you don't want to wait until you have overlap, but before you are inside about a length of open water, no one needs to steer themselves all over the river for you!)