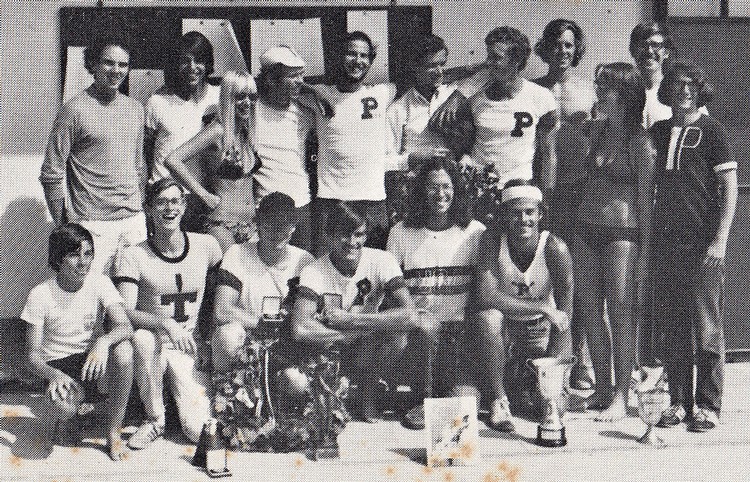 Did I mention that Steve Gladstone and I go way back? . . . to more than a decade before 1972, back when a decade was a very long time in my young life. I knew Steve when he was still "Happyrocks." I had bunked on his hallway at Kent School in 1960, the year he was captain of the football team and the engine room of the Kent Crew.

He is a father figure of sorts to me. I think of Steve, and a tear comes to my eye. I would do anything for this man, Steve Gladstone, my idol since prep school. And I know he would do anything for me. So I ask Steve what I am doing wrong, because no matter what it is, I will adapt, I will learn, I will change, I will do whatever it takes to earn back my seat. "Give me a clue, Steve. It's certainly not strength, not fitness, not experience, not poise . . . but it must be something! Something! Must be!"

Steve is terribly embarrassed. He tells me I'm not doing anything wrong. There's nothing he can say. He doesn't have a clue. After all, we all start clueless.

The Curse of the Jayvee Scar all over again.

That year the National Lightweight Eight was spared the inclusion of an athlete who wasn't moving boats, namely me. I was replaced by a young M.I.T undergrad named Pete Billings, a man less well-qualified in all the tangible criteria I recognized and respected: maturity, fitness, experience, ergometer score, strength, stairs . . I had it all . . . all except the ability to move boats.

Oh. Did I mention yet that the eight we are in the process of selecting will tour Europe undefeated with Pete Billings very capably filling the stroke-seat? Did I mention that? There's got to be a reason for all of this. An explanation. Just has to be! 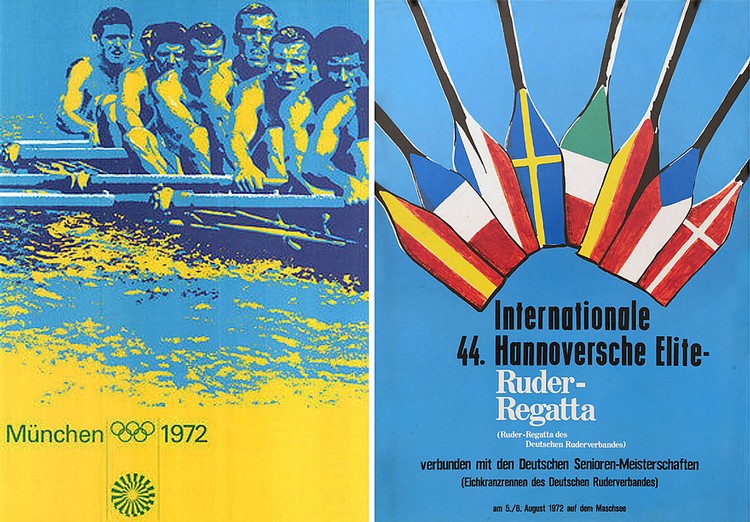 That seat race defeat would keep me on an odyssey that would last something like 15 more years. I had to know exactly what I was doing wrong. I had to solve the riddle. There would be no peace until I understood.

Déjà vu for me.

So, what happens to me after being bounced out of the National Lightweight Eight? Fairthy begs me to be the lightweight single sculler on the European tour, and, fool that I am, I agree.

I have just turned 27 years of age, and I have about a week to get my head together and prepare for the U.S. Nationals in my single. And I have my own brand new Stämpfli single, my pride and joy, the best boat made anywhere in the world, the Ferrari of racing shells, arrived that very spring off the plane from Switzerland, now sporting the name Argent on its side and a ding on its starboard blade.

I resolve to enter the lightweight singles 1/4-mile dash as well as the regular lightweight singles 2,000-meter race. Under the circumstances, I expect to have trouble making the final in "the distance" but hope to have retained my potency from the previous year in the dash. If I at least medal in the dash, I can hold my head high with my teammates in Europe.

But I am still pretty shaken by my seat racing experience, and I will need a bit of luck to find again some of the rhythm and confidence I had this past spring in my single.

Not a particularly good idea, by the way - not for me, nor for anyone else I've ever known - to have to depend on luck in a sporting contest.

I presume you've heard of Murphy's Law. You know, "whatever can go wrong will go wrong." Incidentally, it seems to have gone wrong for the original Murphy. Nowadays nobody can say with complete assurance who he even was! Anyway, Murphy's Law has been very powerful in my life - How 'bout yours? - so powerful that I have posited a corollary, Mallory's Law, namely whatever can go wrong will go wrong . . . to me!

But Mallory's Law can also be quite helpful. Basically, it seems that if I am desperately worried that something might happen, and if I fully prepare for that eventuality . . . then it is just about guaranteed NOT to happen. Time wasted worrying about nothing.

Or maybe not . . . The only things that seem to go wrong are the things that I don't see coming and don't prepare for.

But that still leaves plenty of room for screw-ups, I'm afraid. It is my experience that the power of Murphy's Law or Mallory's Law seems to be directly proportional to the importance of the situation. The more that's at stake, the more inevitable the disaster.

By the time I arrive at the regatta site on my old home course on the Schuylkill River in Philadelphia, Pennsylvania, I'm going reasonably well again in my single, but nowhere near my best, and my head is still completely up my a**. My heat in the dash is a breeze, literally. It's windy, but I qualify for the final without sweat. 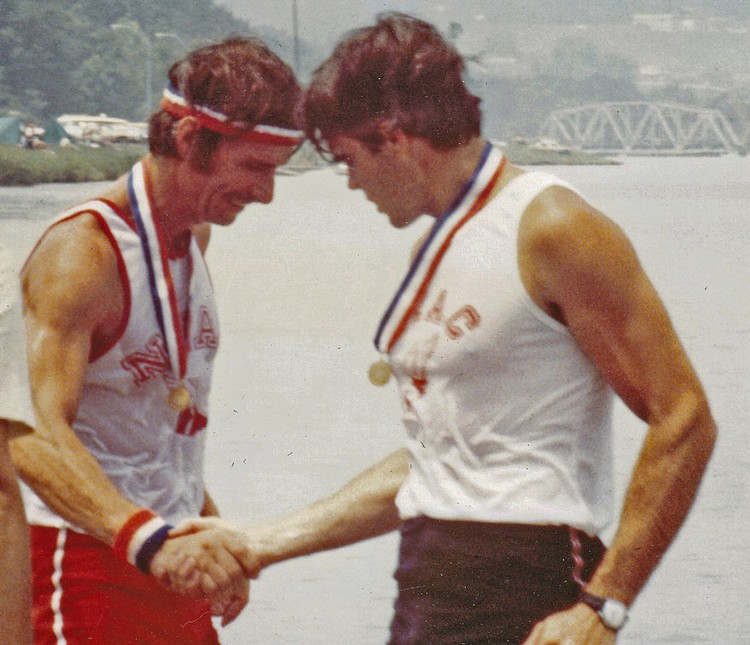 The distance is another matter. There are a couple of guys really flying this year: my good friend Bill Belden from Undine Barge Club, of course, he who beat me in the dash in 1971, and Dr. Larry Klecatsky, an emergency room physician from New York Athletic Club. A few years from now they will become teammates. Today they are respectful opponents.

My distance heat reads like an NYAC team practice. Is this seat taken? Larry's in there, as is the defending U.S. National Lightweight Singles Champion, for Heaven's sake, a guy named Jon Sonberg who wears mirror aviator shades all the time, like that Southern cop in Cannonball Run, as well as some high school kid who is already being touted as the next great lightweight sensation. I have to beat at least one of them since only three of us will qualify for the final. Oh my!

As I settle into the body of the race, Klecatsky's gone on the field. I am in fourth, closely following the other two NYAC guys. Under the Strawberry Mansion Bridge, the high school kid fades. Then we slip past the Canoe Club, and I slip past Sonberg into second. Very satisfying. By the end of the race there is more jockeying behind me, and the defending champion ends up not qualifying, mirror shades and all. So there!

For me, the final is an anticlimax. Belden and Klecatsky have a monumental battle, and I slink over the finish line unnoticed about 20 seconds later, I think in fifth. Not bad for me, I suppose, considering. Best I could do that day, but meanwhile my teammates in the National Lightweight Eight, with me now excised, surgically removed, win by lengths and lengths of open water. Oceans and oceans.

I turn my attention to the dash final. I remind myself how good I am in this most pure, most exquisite of events. I remind myself that just twelve months earlier I was my country's fastest lightweight dashman . . . and only defeated myself with a crab. This year is going to be my year!

Trouble is the weather is unsettled. It's windy from the west during the heats, and I've never been all that confident in crosswinds. It's tough to settle . . . to a 44 . . . if the water's not mirror-smooth. I could use a little luck. I pray for flat water the next day . . . or at least a sheltered lane.

I'm worried. I know the last quarter-mile in Philadelphia like the back of my hand. In the morning, the water is most often calm, but in afternoons in July it's a crapshoot. With a crosswind from the west, Peter's Island shelters Lanes 4, 5 and 6 for the first 35 strokes and leaves the other three lanes unprotected.

God, I hate to have my fate depend on a lane draw! And Peter's Island? It's rarely been kind to me. The scene of Al Campbell's crab in 1966. And once I almost died rowing beside Peter's Island . . .