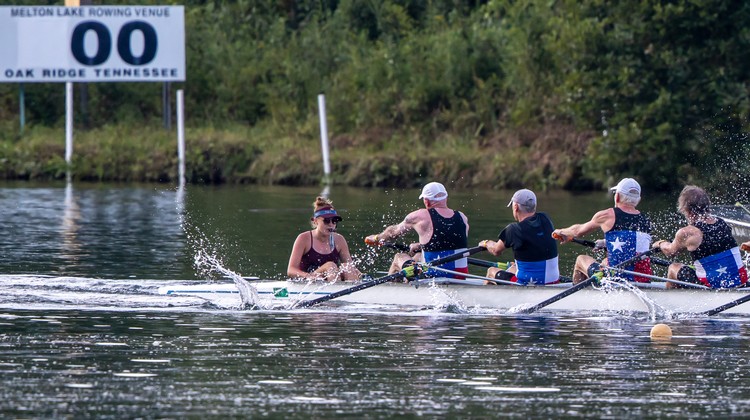 Coxing a TRC Eight at the 2021 Masters Nationals

Next up In The Driver's Seat--where we hear from the folks who keep the shells straight and the crews on target--is coxswain Sydney Large.

Sydney is just in her fifth year in the sport, but she's coxed Club Men at the Dad Vail and ACRA, D1 Women at the Big Ten Championships, Masters at Nationals and is currently back to college coxing (as a grad student) with the D2 Women of Central Oklahoma. Oh, and she's done a bit of coaching along the way with the Texas Rowing Center for good measure.

She started her coxing-to-coaching-to-coxing odyssey on the Mississippi at the University of Minnesota, walking onto the Men's club team. Sophomore year she moved two boat bays over to join "The U's" Division 1 Women's team, and spent two years racing with the Gophers before COVID intervened and she opted to graduate early.

After a gap year in Texas coaching novice juniors and racing with the masters at Texas Rowing Center, she transfer-portaled her way to the University of Central Oklahoma to do a graduate degree with her remaining eligibility.

Let's hop In The Driver's Seat with Sydney:

row2k - Give us your top three essentials for being ready on Race Day:
Sydney Large - First: Preparation is key for all coxswains. Like many coxswains, I always carry my fanny pack on me that has wrenches, a variety of nuts, bolts, spaces, etc for the boats, tape, zip ties, and anything else I can fit in it. 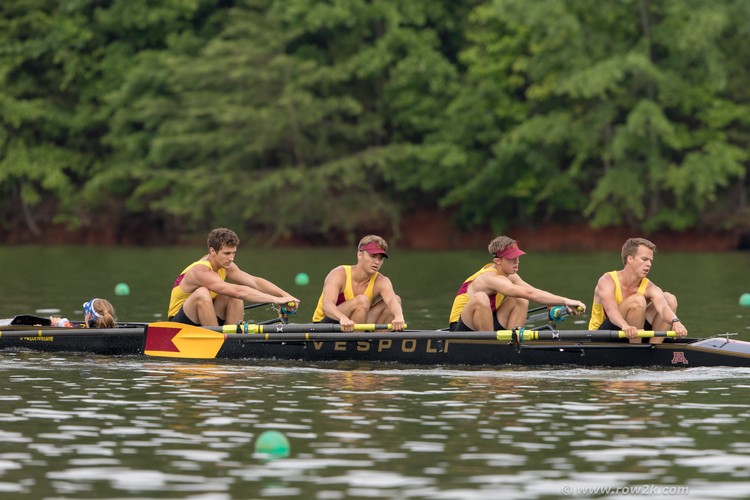 Sydney, way back in the beginning, with the Gopher's Frosh Four at 2018 ACRA

I also believe dressing for the weather is key, and as one of my assistant coaches at Minnesota told me, "there's nothing more distracting than a cold coxswain." Thankfully, being a coxswain in Minnesota prepared me for all sorts of weather. The key to layering? 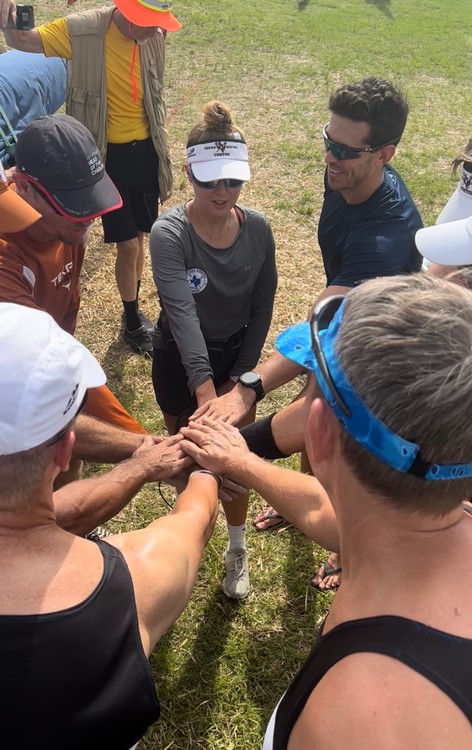 Second is having a clear race plan that's been thought out and communicated to all rowers ahead of time. Typically, I keep my race plan flexible to leave room for decision-making in the race depending on where the boat is, but I don't worry about specific splits too much because all I care about is making sure our bow ball is out front.

The third essential thing is keeping the vibes good and all the rowers confident. Most of this is established in practices leading up to a race. I try to let rowers know when they're doing well and have made good changes all along, to help build confidence when it comes to race time.

row2k - What is your favorite drill to run with your crews? Any tips on how to the drill well, for maximum effectiveness?
Sydney Large - My favorite drill is How Low Can You Go?--the boat attempts to see how low they can get the stroke rate while keeping a consistent split and with the goal to keep the boat balanced. I find it helps a lot with establishing controlled recovery while still remaining quick and explosive off the drive. I've been in boats where we've gotten it down to 8 or 9 strokes per minute.

row2k - What's some of the best coaching advice you've received about your coxing?
Sydney Large - I had a Sophomore slump when making the jump from Novice to Varsity. My coach told me that I had the potential to be a great coxswain, but I needed to focus on building my own self-confidence before I could build confidence to the boat. That's something that's always stuck with me.

Another key moment in developing as a coxswain wasn't advice from a coach. My coxing went from good to great when I started coxing masters rowing. Getting advice and feedback from people who had been rowing longer than I've been alive was a game-changer. Every rower had been through so many different race scenarios and types of practices that they could give me hyper-specific feedback. 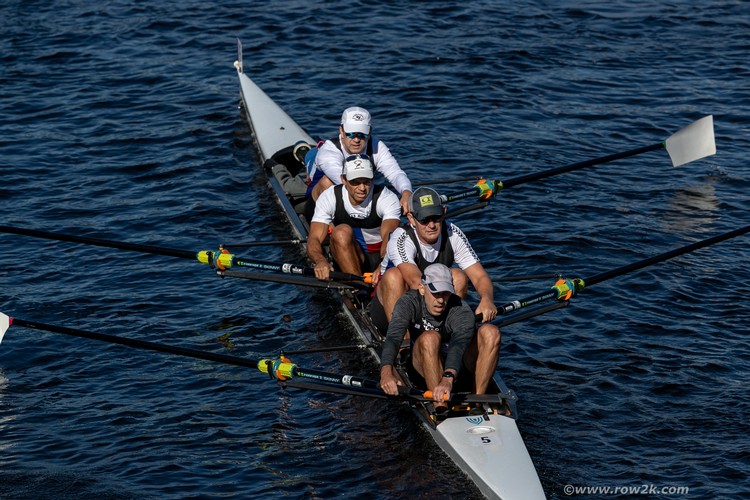 When I started coxing masters, I also coached novice juniors at Texas Rowing Center. Having to go back to square one and coach rowing from the ground up also improved my coxing because I could literally be a coach in the boat moving forward.

row2k - What is a mid-race call or move that you've made that you'll remember for the rest of your life? If so, what did it involve and how did you call it?
Sydney Large - Every race stands out in its own way, but I love calling a swing 5 a couple of times during a race. It can completely change the momentum and it's fun to feel the boat pick up.

Another call I frequently make when we're a few seats down is, "I want to look X team's coxswain in the eye in X amount of strokes." That tends to get the boat amped up and keeps the energy up. 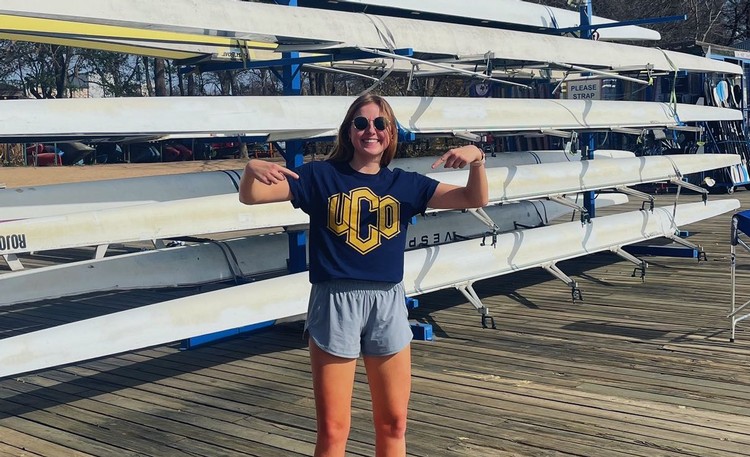 row2k - Can you tell us anything about you learned how to make motivating calls?
Sydney Large - During my novice year of coxing I watched a lot of Youtube videos and read a lot of articles on coxing.

Once I felt like I had a strong foundation I started to take what my coaches would say from the launch or on land and start incorporating that into my coxing. Then I began going directly to my rowers and asking them what they wanted to hear.

I think when coxswains first start coxing, there's a lot of information thrown their way, so being able to focus one thing at a time and begin to build on it has been beneficial. I had a coach run a drill a handful of times where the coxswains couldn't say any words--we could only make sound--and that drill always has reminded me that how you say things is just as important as what you say. 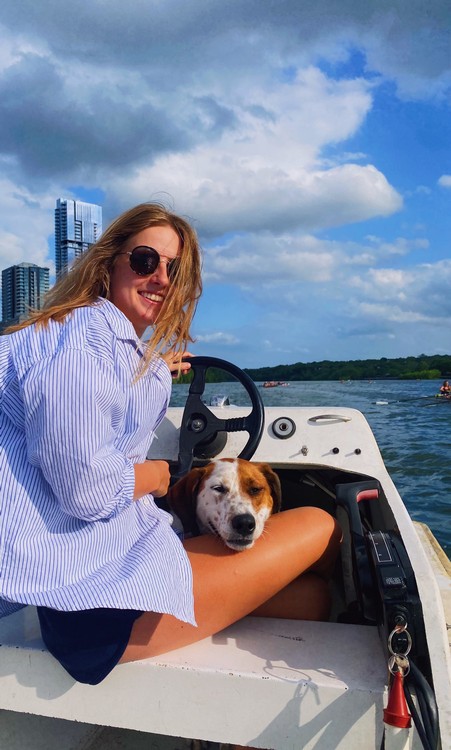 row2k - Tell us about the best race/practice you've ever had?
Sydney Large - My best race weekend was Masters Nationals this year with Texas Rowing Center. I felt really locked in all weekend and walked away with four 1st place finishes.

I felt comfortable with all my crews and understood what motivated them and knew everyone was rowing for fun. Rowing, especially at the collegiate level, is highly competitive and it's important to remember that racing should be fun and boats that have fun rowing typically row better.

There's no bad races or bad practices, just learning opportunities. Every athlete and every coxswain is going to have bad practices; it's part of the process. However, because coxing is so mental, I've found it important to shake off bad practices and move on. Hanging onto failure isn't going to help anyone.

Thanks for riding along with Sydney -- and, remember, this column is open to all "drivers" out there, so if you are an experienced coxswain at any level--from juniors to masters--and would be willing to invite row2k to join you in your ride, just contact us here. We'd love to hear from you about what you see from the Driver's Seat. 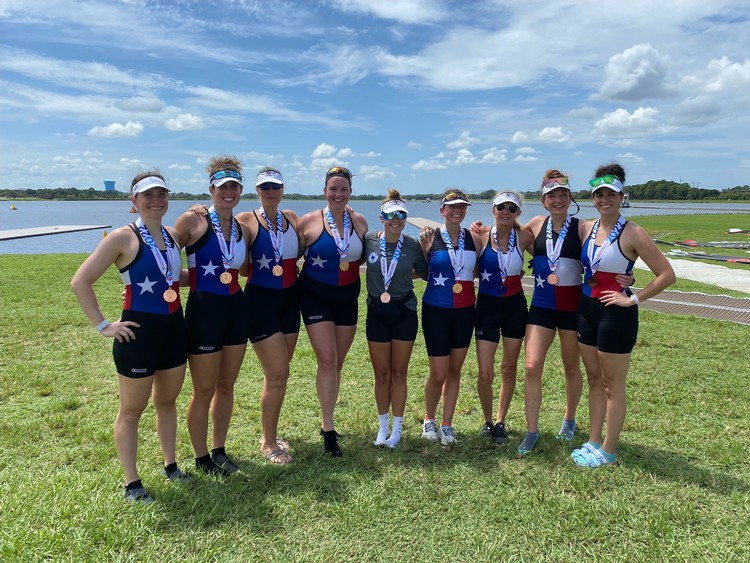 In the Driver's Seat, with Piper Higgins

In the Driver's Seat, with Danielle Swan