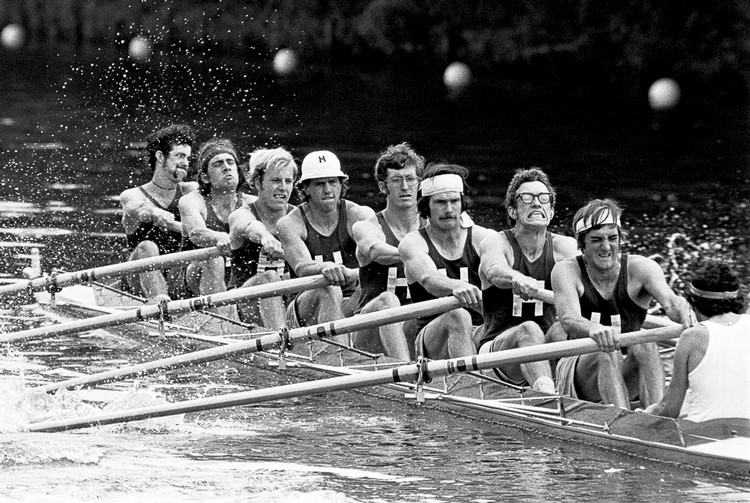 Steve Gladstone's 1971 Harvard Lightweight Varsity is generally acknowledged to have been the fastest lightweight crew in the history of mankind up until that time, undefeated, winners at Henley - though my friend Chris Williams of the 1967 Cornell Lightweights reminds me every chance he gets that their winning margins at the Sprints and at Henley were much larger than Harvard's in 1971. Nevertheless, the Cantabs broke six minutes over 2,000 meters in dead flat conditions on the Rotsee in Luzern, Switzerland, and with the equipment of that era, boats and oars 50% heavier than those of today.

"The Super Boat!" That's what we called them. Everyone idolized these guys. I even did a silk-screen rendering of them thundering off the line at Henley. It's a collector's item today. I don't even have a copy.

In the spring of 1972 when I went to JFK Airport to pick up my beautiful brand new Stämpfli single, just off the plane from Switzerland, the best boat made anywhere in the world, the Ferrari of racing shells, soon to be my pride and joy, there was another brand new Stämpfli single lying right next to mine with Super Boat bow-man Phin Sprague's name on it.

I hung around for a while, hoping he might show up just so I could meet him. I gave up after an hour - and I haven't met him in person in the intervening years, but when he purchased a copy of The Sport of Rowing, my four-volume masterwork, I told him the story over the phone and we had a good laugh.

I was destined to meet Super Boat 4-man Tony Brooks in Europe that very summer of 1972. He had made the Olympic Team as a heavyweight, thank you very much! More recently I have visited him in Chicago, and we have compared notes on coaching.

I was destined also to meet 7-man Dickie Moore and 5-man Jim Richardson. Good men and true. Six-man Chuck Hewitt and I would become fine friends. He also made the 1972 U.S. Olympic Team as a heavyweight, there being no events for lightweights back then, and as I describe later in this book; the Vesper coxless-four he rowed in Munich would bring me one step closer to the goal of my lifelong odyssey, the perfect stroke.

I would meet Super Boat stroke-man Dave Harman on the proverbial field of combat on the last day of the 1976 National Women's National Championships in Long Beach. His Northfield Mount Hermon prep school girls' eight totally surprised my defending National Champion high school girls' crew from ZLAC Rowing Club in San Diego, creamed us off the line, straining like Dave did in photo of his Super Boat at the beginning of this chapter. Though we moved back on them the whole way, it was too late to catch them before the end.

Until that race finished, ZLAC had been undefeated for the year and had already won U.S. Championships in the junior singles, doubles, coxed-quads and coxed-fours, the novice eights against all the colleges - I warned them not to let us race all the colleges! - and both the heavy and light wherries, scoring more points than any other team in the country! And received an invitation to the Olympic Women's Doubles Trials. Quelle catastrophe!

Interesting thing about life. No matter how full of myself I get, life always seems to provide me with timely reminders of my own limitations. Oh my, yes! Dave Harman performed that function in 1976. 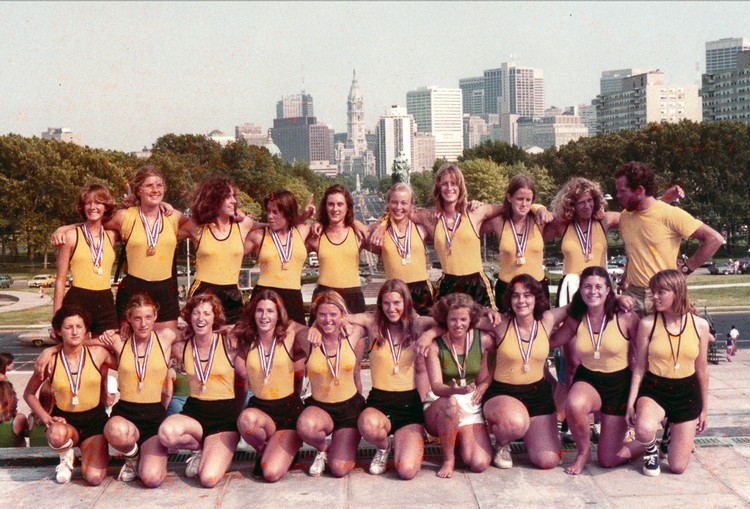 The very next year we were determined to outdo our 1976 record. We again arrived undefeated at the National Women's Rowing Championships, this time in Philadelphia, and proceeded to come in first AND SECOND (!) in the junior women's eights, coxed-fours, coxed-quads, and doubles - Are you impressed yet? I certainly was! - but in the junior women' singles we placed only second and third. A young sculler named Kris Negaard arrived from somewhere in Florida apparently not impressed at all by our formidable reputation, and kicked our butts, just like that!

Thud!! The sound of my inflated ego once more returning to Earth.

Twelve of us then got on a plane and competed in Europe for the next six weeks, the first U.S. junior women's team ever to do so. Did pretty well, large regattas and small, won some and lost some, made a lot of friends, but we never forgot the lesson of Kris Negaard. 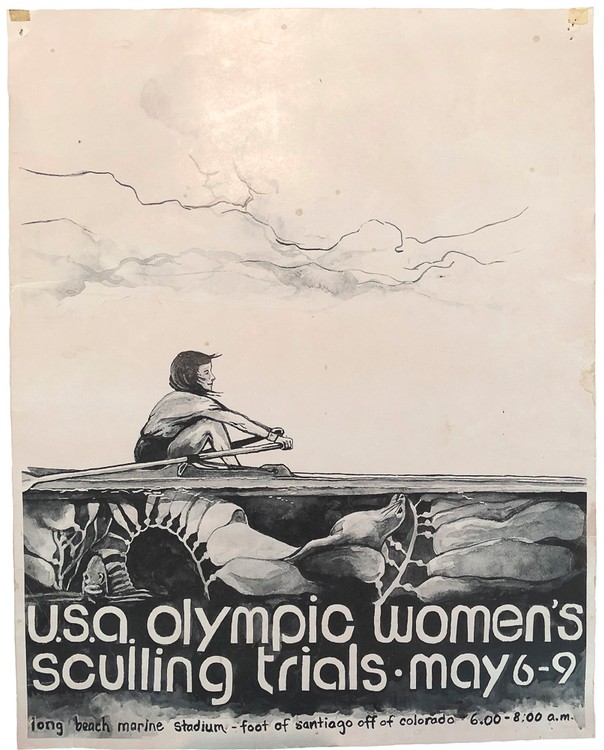 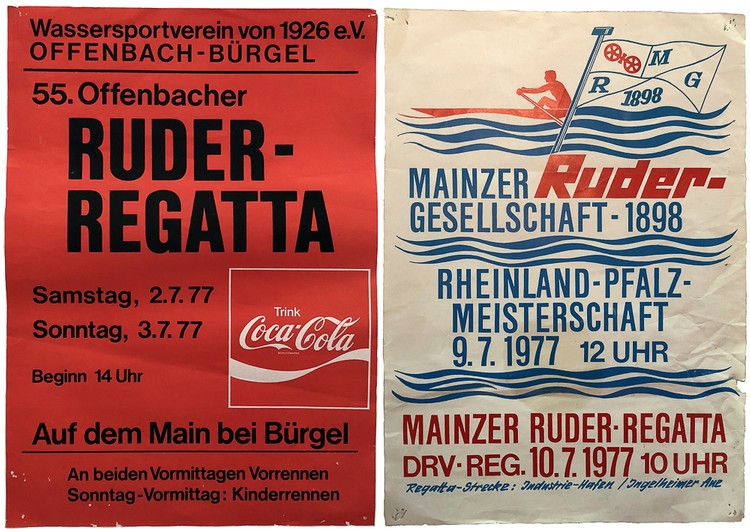 Incidentally, a few years ago, I was sitting in a crowd somewhere - probably a USRowing Convention, I remember we all had name tags on - and who should I spy nearby but "Kris Negaard". After scratching my head for a moment, it having been nearly 40 years since we had first crossed paths and I don't think we had ever actually met back then, a synapse in my little pea brain fired and I introduced myself. She remembered the name if not the face, and we had a very cordial conversation. I don't think I told her what a service she did for me and my team in 1977.

But enough of looking into the future!

Back at the Farthington 1972 U.S. Lightweight Selection Camp the anticipated coming of Super Boat Coach Steve Gladstone takes on messianic overtones to everyone. A day or two after he arrives, Steve Gladstone takes me aside and asks me to switch to port as a favor to him . . . so that I can stroke the eight. Just like that. "Pete, would you be so kind as to switch to port so that you can stroke the eight for me?"

Simple. Over a period of time, it is a fairly straightforward matter to identify the eight best guys. Those not selected are extinct: Australopithecines, Neanderthals. Dodos.

As the Prince of Wales, the heir apparent, I stroke one of the fours involved. It is my H.M.S. Beagle, and for several days I am not switched. Nosirree! Steve is concentrating on selecting those who will sit behind me in the National Eight! Life is very good!

The boat is nearly set when Steve switches me, on a whim perhaps, just to be fair perhaps.

I lose big. I get blown out. Blown out of the water. I'm shocked. Steve is shocked. Everyone is shocked. No one has an explanation. All of a sudden, Steve's golden boy is exposed. Five years have changed nothing, and Fred Leonard's judgment is confirmed! Just like my senior year at Penn, I'm not a boat mover. I'm an anchor, a boat stopper! I'm a dodo . . .