Next up In The Driver's Seat--where we hear from the folks who keep the shells straight and the crews fast--is coxswain Meagan Meldrim.

She has been at the helm for 14 years, starting in her senior year at Northview High School in Grand Rapids, MI back in 2008. Meagan coxed the Michigan State men's team throughout college, winning ACRA in the Men's Light Eight with the Spartans in 2012. After spending a little time in Boston, she has been coxing for Lincoln Park Boat Club in Chicago since 2015.

Let's hop In The Driver's Seat with Meagan:

row2k - What would you say are the top three most important things for becoming a successful coxswain?
Meagan Meldrim - There are so many things that go into being a successful coxswain, and what might work for one crew might not work for another! But I'd consider these three things pretty universal: communication skills, steering/awareness on the water, and knowing your crew.

Communication skills: I don't think it's talked about enough how good coxswains need to be excellent communicators. It is so relevant to so many aspects of the job, including: 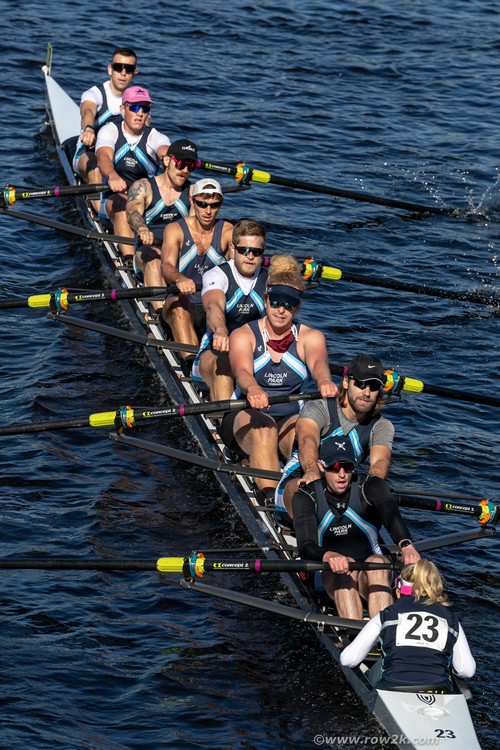 Steering/awareness on the water: The first part of this is obvious--coxswains absolutely must steer a straight course. But going beyond that, they should be aware of what's going on at all times. This includes knowing where the other crews are, what the coach is trying to achieve, keeping a lookout for speed boats or barges, etc., and proactively making calls to keep practice running smoothly and safely. It really requires coxswains to not only be keeping track of many things at once, but to be thinking two steps ahead at all times.

Knowing your crew: I think this becomes more important with the more experience you have, but that doesn't mean it doesn't apply to novices, too. For example, I was able to cox both our men's and women's 8s at USRowing Masters Nationals this summer, and was recently thinking about how different I approached each of those races. Not just because they are different genders, but because the personality, skill-level, and time rowing together warranted it. The men had spent a bit more time in the boat together, so we had more of a technical focus, specifically off the start where we knew we tended to be a bit slower. For the women's eight, it was literally their first time ever hopping in a boat together so our focus was on trusting each other and giving it our all every single stroke, no matter what happened. Coxswains need to be in tune with their crews to be effective for them.

row2k - What is your favorite drill to run with your crews? Any tips on how to the drill well, for maximum effectiveness?
Meagan Meldrim - Ok, I'm going to cheat with this one--because it's technically not a drill--but one of my favorite practices we run at LPBC is 2x42' where we do it as a rate pyramid. So we'll start with 5' on at a 20, followed by 1' off, then 4' on at a 22, 1' off. We go all the way up to 28 for 1' and then do 30 for 1' at the "top" before coming back down. (The rates can also be adjusted based on the needs of the crew.)

While not a typical drill, it is such a great practice for getting a boat rowing together at different rates and figuring out how to be effective at those rates. Plus, when we do it with the Lincoln Park mens 8, we're constantly trying to reach the point where the Chicago River finally bends after miles and miles of being pin straight. (We haven't done it yet but I've got my fingers crossed for this season.)

row2k - What's some of the best coaching advice you've received about your coxing?
Meagan Meldrim - This isn't specific coaching advice I received, but I remember how and when coxing really started to click for me.

When people ask me how I learned to cox I always credit my stern pair from my sophomore year of college. Whenever something was going wrong in the boat, they'd ask me to tell them what I saw. I would describe to them what was happening and they'd explain what I was seeing and what could be said to correct it. This helped me break out of just trying generic calls to solve problems in the boat (like ports raise your hands) and helped me start to really diagnose things.

row2k - What is a mid-race call or move that you've made that you'll remember for the rest of your life? If so, what did it involve and how did you call it?
Meagan Meldrim - Coxing LPBC's Women's Club 4+ at the 2019 Head of the Charles is one of my favorite memories because it was a really experienced crew who had a lot of time rowing together. Because of that, there was a lot of trust amongst the five of us and I felt really confident that the four ladies rowing would respond if we needed to make a big move to get around a crew, which ended up happening twice. 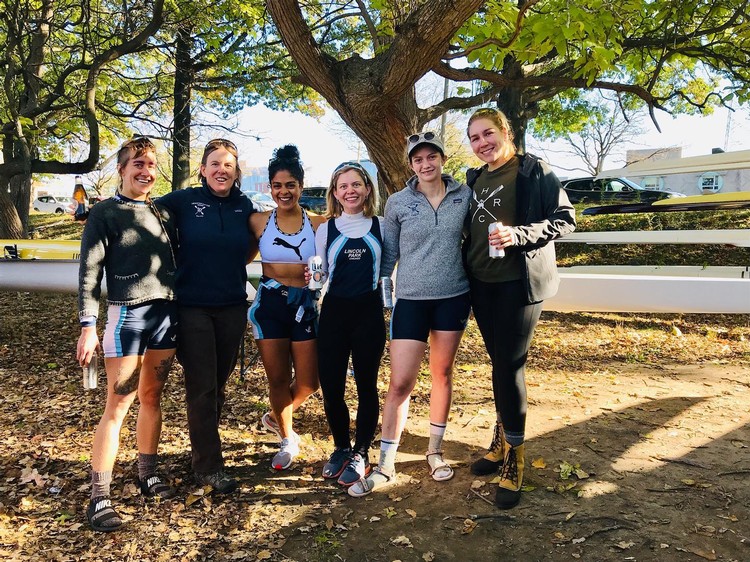 The first time was early on in the race, where we had been slowly but surely walking on the crew ahead of us. By the time we were between Western and Weeks, we were starting to get in a precarious situation where if we didn't pass immediately (or hold back), we'd be looking at going through Weeks two wide--which I really didn't want to do. I told the boat the situation we were in--pass now or wait until after Weeks--and what I wanted to do, and they responded when I asked them to bring the rate up. We essentially took a mid-race sprint and passed the other crew entirely in a little over 10 strokes.

That same race we found ourselves in another tricky situation coming out of the big turn. We had the inside line and had been walking on San Diego the entire way, just about to see deck overlap as the turn ended and we set up for Eliot. However, I knew if we continued walking on San Diego we'd end up taking the Belmont turn on the outside, also something I didn't want to do, so I asked the ladies to trust what we were about to do and called for them to paddle for two strokes so I could switch which side my bow was on. Once we crossed over, we built right back up and successfully passed them through the final turn.

Why these moves are memorable to me is because both of those calls could not have been executed in a boat that did not have that level of trust in each other. I trusted that the four women rowing would respond to what needed to happen and they trusted that I was making the right decision.

row2k - Can you tell us anything about how you learned to steer straight?
Meagan Meldrim - Steering is not something that came naturally to me at first. When I first started coxing in high school, my coach said it looked like I was trying to sign my name in the river. Even as I got better at coxing, steering was (and is) something I always need to remember to proactively think about--it doesn't just happen on its own.

I'm honestly not sure how I finally figured it out. But what I will say is don't be afraid to occasionally make steering your one and only focus, if it's for the safety of your crew. Even after 14 years of coxing, I will still occasionally say to my crew "Ok, I need you to keep doing what you're doing so I can focus 100% on steering right now," if I find myself in a lot of boat traffic or an area where I'm having trouble seeing what's ahead. I'd rather go silent for a few beats and maintain my course as opposed to not reacting fast enough. 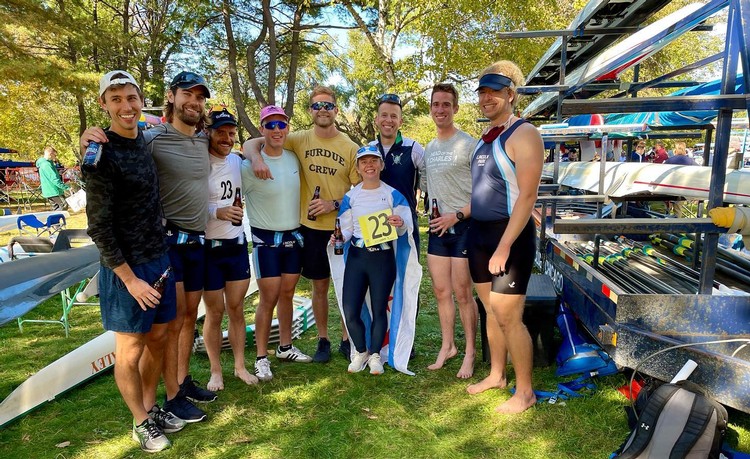 row2k - Tell us about the worst race/practice you've ever had?
Meagan Meldrim - Worst practice is an easy one. Fall of my freshman year of college, I was trusted with coxing the first men's 8, in our nicest shell at the time, and ran it straight up on a submerged island/log, completely tearing through the hull from about four seat to six seat. The damage was so bad it was sent back to Vespoli for repairs and, for a while, Vespoli was using the before and after images to advertise its hull repair services.

row2k - Tell us about the best race/practice you've ever had?
Meagan Meldrim - I've had a lot of really great races over the years for a variety of different reasons. However, the one that comes to mind is actually not one we won or even medaled in. For me, LPBC's men's lightweight 4 at USRowing Club Nationals in 2017 is the epitome of executing a great race plan. We didn't have much time in the boat together and close to no racing experience in the lineup, but the crew came together exactly when it needed to. We ended up finishing solidly in fourth, in a very fast field, but I loved this race because we rowed the absolute best race we could have: we hit the rates we wanted, made moves exactly when we wanted to/needed to, and came off really, really happy with our performance.

A close second would be winning ACRA my senior year of college with Michigan State. 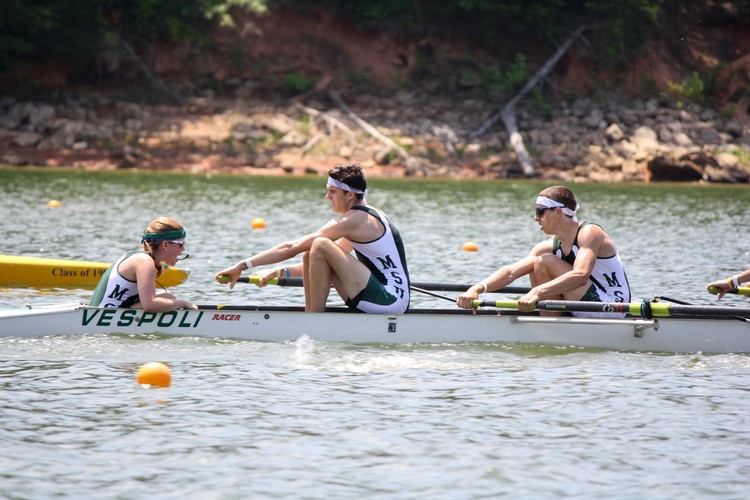 Thanks for riding along with Meagan -- and, remember, this column is open to all "drivers" out there, so if you are an experienced coxswain at any level--from juniors to masters--and would be willing to invite row2k to join you in your ride, just contact us here. We'd love to hear from you about what you see from the Driver's Seat.

In the Driver's Seat, with Jack DiGiovanni