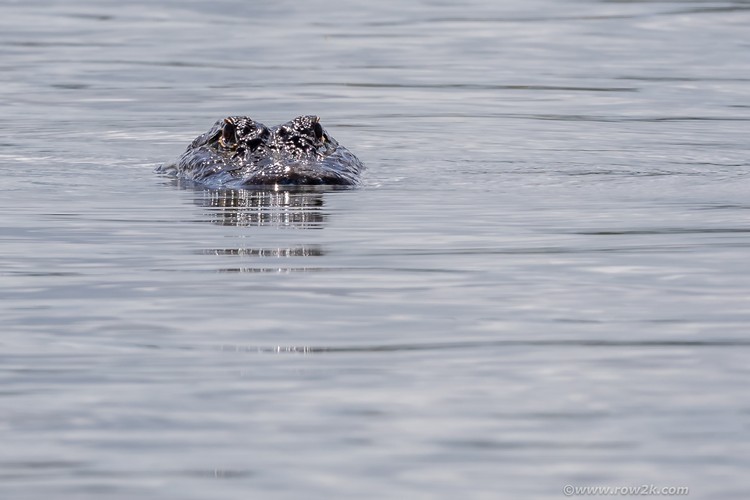 Ed. Note: When we ran the "Behind the Photo of the Day" story last week about Eugene Janssen's alligator run-in, we mentioned not having heard of a similar incident, but Don Vickers let us know about his own close encounter, a front-page-worthy attack in Florida in 1992.

In our defense, row2k was still 5 years in the future back in '92, otherwise Vicker's tale--which he described to the Orlando Sentinel at the time as "like a scene out of Jaws"--would certainly have made the row2k "In the News" list, we promise. 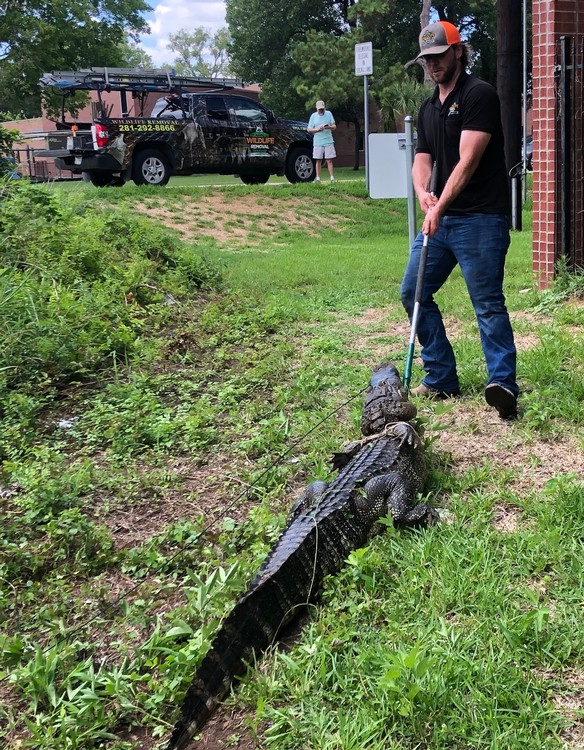 Luckily, Vickers remembers his gator attack very clearly, and was kind enough to send in this account of his brush with the beast--and you can read the original article here.

In related news, the Shark-munching gator Janssen ran into in Texas was "arrested" last week, and turned out to be a good-sized female guarding a nest, just as Janssen suspected.

We hope you enjoy Don's story, and we also hope--of course--that we are running out of scary gator stories to relate.

I was born in Leesburg, Florida.  The street on the address of my birth certificate reads “Lake Griffin.”  My family lived on the southwest shore of the 7 mile long lake which covers 9,300 acres and has an alligator population of 4,300, according to Florida Game and Fresh Water Fish Commission.

I routinely rowed my 1970 Kaschper single on the lake in the 90's.  I launched from a small sandy beach where I also had my Hobie 16 catamaran.  If it was windy, I would sail.  If not, I preferred to scull. I would wet launch from the beach and take a couple of arm strokes to get outside the grass reeds before drying my feet and putting on my socks. 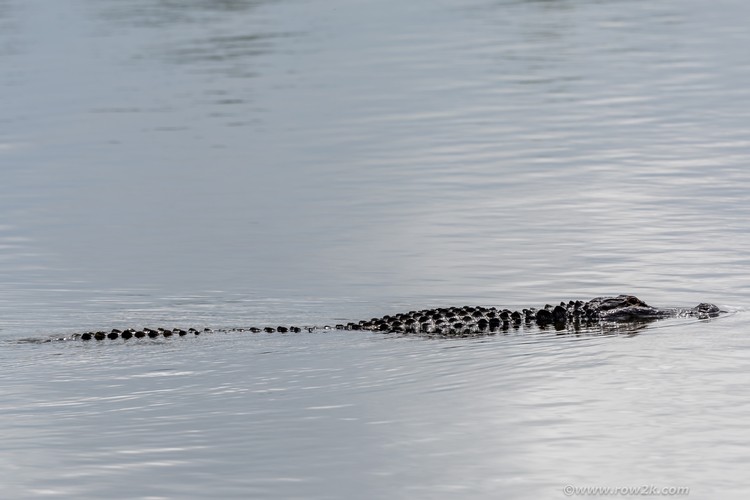 More from the NCAA gator sighting

I would encounter a dozen or more alligators on a typical row.  A common occurrence would be that a gator would start swimming toward me as I passed and then suddenly do a 270-degree turn, submerge, and quickly swim away.  There would be a wake on the surface as they quickly swam away.  My theory was that the sound of the oars catching would sound like fish jumping and the gators' eyesight was not great.  When they would get near enough to realize I was a human, they would panic and get away.  The 270-turn allowed them to use their tail to get up to speed quickly.  Basically, they behaved as if they were more afraid of humans than humans are of them.

On July 31, 1992, I went to the beach for a row.  There was a light wind, so before putting on my socks, I sat for a moment to decide whether to go east or north to get the best water.  I was looking over my shoulder to see which water looked better, when I felt the stern rise a bit and immediately realized the cause had to be a gator.  I looked toward the stern and saw a gator swimming back into the grass.  I immediately started yelling at the animal to remind it who was on top of the food chain--and in anger, because I knew the boat was probably damaged.

I prepared to back the boat into the beach, which was about 50 feet away, to take a look at the damage. Since I had been about to dry my feet, I had my oars between my thighs and chest, so I had to unwind and go to the finish position.  As I was just about to take the stroke, the gator raised its head inside the port rigger and started hissing at me.

This changed my yelling to a high-pitched scream.  I knew I was going to get hurt!  The gator then, once again, disappeared under the surface.  This was the first of the ‘Jaws’ moments in this adventure.  I knew the gator was there but not where it was.

I went ahead and took a hard backing stroke to get back to the safety of the beach.  I then discovered that the gator had bitten through the stern of the shell.  The last few inches of the stern just folded to one side and the stern filled with water.  This caused the stern to sink.  My feet were now in the water, with the bow in the air.

Worse, the gator was climbing up the stern of the boat!

I then did what one NEVER does on a wooden shell and climbed on the bow deck canvas.  Once again, the gator disappeared.  I stayed as still as I could on the deck.  The first thought I had was to remain as still as possible with my arms forward holding onto the splash board.  I had seen a film about how sharks attacked surfers because from below they look like seals when they are paddling their surf boards.  I then reminded myself that the gator didn’t see that program, didn’t know what a seal was and, most importantly, was well aware that I was there. 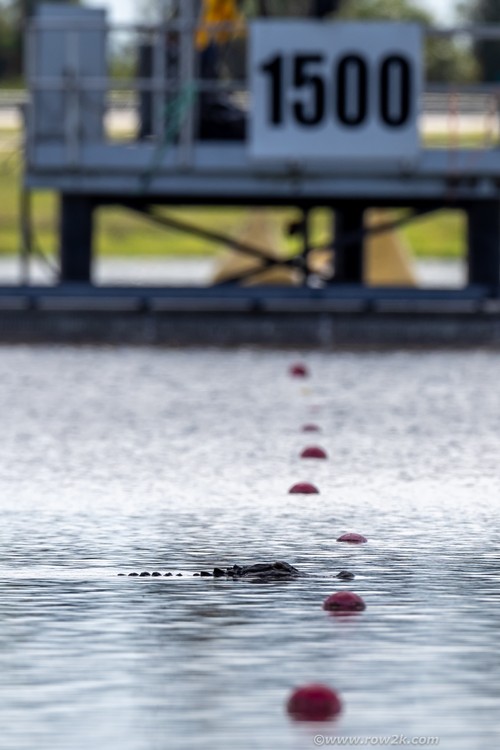 row2k spotted it heading down past the 1500m mark

It did strike me, at this point, that the gator was getting me further from my safety zone and into water where the gator had a great advantage.  It also occurred to me that I was no longer on top of the food chain.

I started paddling the boat back toward shore but only did one or two strokes before the beast came up next to me on my right side.  I immediately abandoned the scull and started swimming.  I only had to take 2 or 3 strokes before my feet reached the bottom.  As I ran toward safety, I did grab the stern of the boat and brought it with me.  The gator swam next to the bow and didn’t come after me.

My uncle’s house was closer than mine, so I went there to call the police.  An officer arrived in a few minutes.  He walked down to the beach with me and unholstered his gun.  The law in Florida allows a police officer to shoot an alligator if he sees the animal acting aggressively.

The gator was still laying next to his newly acquired boat in the shallow water.  The closer we got to the beach, the more the gator backed out into deeper water until it was the normal, mostly submerged object, showing just the eyes and nostrils.  The officer could not shoot the gator but did report to the dispatcher that it was a nuisance gator.  This resulted in the dispatcher getting the state wildlife people to make it official.

The wildlife folks contacted a local gator trapper who arrived a hour or so later.  As is shown in one of the photos in the newspaper, he set up a bait trap for the gator.  This entailed driving along stake into the lake bottom with a rope loosely connected to the top above the water.  At the end of the rope was a hook a couple of inches long, embedded into the rotten carcass of a chicken (courtesy of a local grocery store).  The other end of the rope was tied to an oak tree on shore.  The trapper said it would take a couple of days for the gator to take the bait and to give him a call if the chicken was no longer visible.

We all assumed the trapper was wrong and that the gator would go for the bait sooner, but the trapper was right.  I had to go out of town on business so didn’t get to see the trapping.  On that Monday or Tuesday, the bait had been taken and 9-foot male gator was dragged to shore.  It was not the gator that attacked me.  Unfortunately for this gator, he had to be destroyed as it has been involved, involuntarily, with humans.

The gator that attacked me had a white scar on its lower jaw as noted by the police officer.  The bait was taken again a couple of days later and, this time, had the gator in question.  It turned out to be a 12-foot-long female weighing 450 pounds.  The theory was that the gator had laid her eggs next to our beach and was protecting the nest.

I took the shell back to Kaschper for repairs and rowed it for a couple more years until I was once again attacked by another gator who did more damage.  This attack was not as dramatic as the gator then swam away while I rowed the badly damaged boat to a nearby dock.  Sadly, though, that second attack doomed my boat.

It was quite likely that the gator in question had been fed by humans.  I eventually moved to Tampa and have rowed on the Hillsborough River for the past dozen years. The nicest thing about Tampa, gator-wise, is that it is not a destination for snowbirds. The people who live here and use the waterways are wise about nature and know not to feed the wild animals. There is still a decent population of alligators here.  In fact, every body of water in the state has them, as they belong here.

Obviously, were I smart, I would given up sculling after the attack but I would rather row. 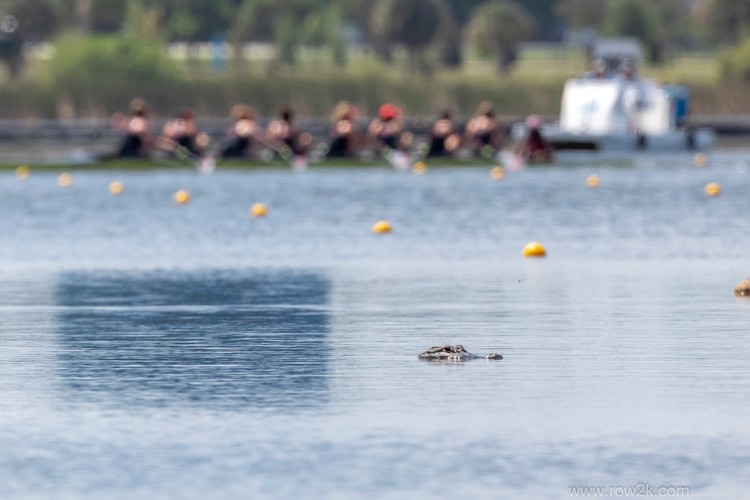 The Sarasota gator even stuck around for some racing that Saturday