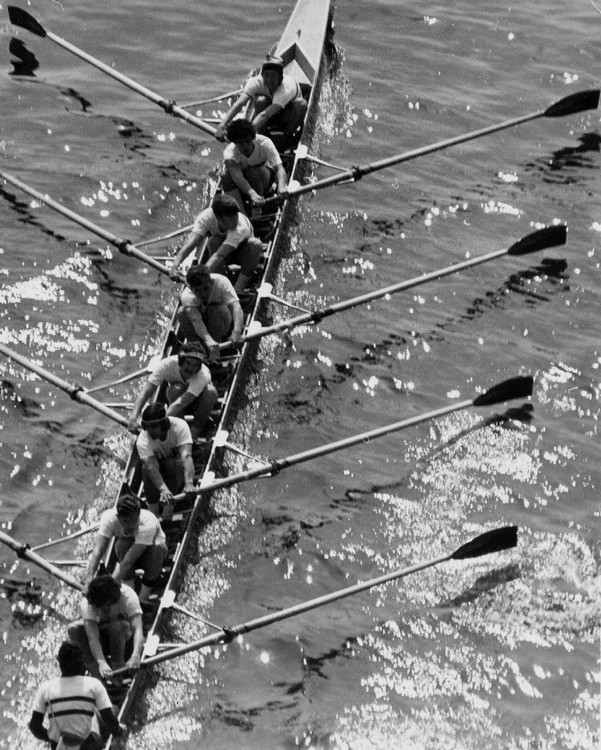 John Cantrill and I turn out a pretty good Penn Freshman Lightweight Crew in 1971. Yessirree! With nicknames like Magic Man and Salt Man and Bolt Man and Dent Man and Alt Man and Space Man. Terrific year, and only a single horror story.

Norman Hildesheim is named after a beautiful village with a beautiful cathedral in Germany, a village that I will visit through rowing just one year later in 1972, but in 1971 Norman Hildesheim is the Freshman Lightweight Crew Coach for Columbia University, and that year it is our turn to travel to the august Gould Boathouse on Spuyten Duyvil Creek at the northern-most tip of the New York City Borough of Manhattan to compete in the Marcellus Hartley Dodge Cup between the Penn, Yale and Columbia Lightweight Crews.

That year Norman's crew beats our crew. Crosses the finish line first. They get to parade around their Morningside Heights campus the entire next week with our racing shirts on their backs. Two horizontal red stripes across the chest, a blue "P" with an oar through it over each of their hearts, hearts bursting with perfidy, I can assure you. I find out later that "Spuyten Duyvil" means Spouting Devil in Dutch. Why am I not surprised?

Columbia University. A pox on you!

On this day the official racecourse runs south to north along the west or left-hand bank, on the Manhattan shore of the Harlem River, but there are only a few buoys to mark it. At this point the river is more than 100 meters wide, and boats are pretty much left to steer on their own. Anyway, right at the start of our race, Norman's crew takes a detour completely off the course, moves over to the east or right-hand bank, and starts rowing along the Bronx shore. Could this be a mistake . . . a novice coxswain having trouble navigating, perhaps?

Get this. At the 1,000-meter mark, Norman's crew encounters the Penn, Columbia and Yale Jayvee boats making their way south on the river from the boathouse heading to the start line for their own upcoming race and following the east bank off the racecourse. Norman's crew momentarily detours back onto the racecourse to avoid certain head-on collision . . . and then immediately returns to the right-hand shore for the balance of their race. Watching from the following launch, in my naiveté I am completely baffled. How could they be so stupid?

Turns out that when the tide's running just so, as it happens to be on this particular morning, the current flow running against the crews rowing north on the west bank is absolutely brutal. And the water is dead still on the east bank. Belatedly, a light bulb switches on over my head. Oh . . . my . . . God! Put a fork in us. We're done. 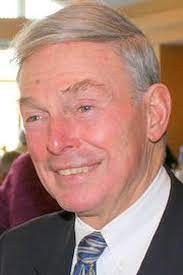 Incidentally, Norman Hildesheim was otherwise quite the charming guy, a Harvard-trained architect who would spend years as the rowing correspondent for the Old Gray Lady, The New York Times. In later years we would have annual cordial conversations at the San Diego Crew Classic, there being no point in me dwelling on the past. Unfortunately, Norman passed away suddenly and sadly nearly a decade ago.

Was t-h-i-r-t-y t-h-r-e-e s-e-c-o-n-d-s f-a-s-t-e-r t-h-a-n C-o-l-u-m-b-i-a fast enough for us at the Eastern Sprints Championships? It should have been. In our morning heat, our guys enter the last 500 rowing easy, only half a length down on Harvard. We stroke it in full of confidence, but in the afternoon as all the crews approach the start floats, one of our guys feels his centerbolt snap.

The ancient Pocock we have been rowing in all spring is just about the oldest shell in the Penn boathouse. Fearing he'd break the entire footstretcher during the race without that bolt, the 1971 Penn Freshman Lightweight Crew dares not even continue their warm-up while the officials send back to the finish area for a replacement. When it finally arrives, they start the race immediately. Immediately.

Did I mention it is pouring rain and 40 degrees? Our guys are freezing.

We crab, get off the line last. In our absence Harvard assumes a commanding lead. We pass everybody else, climb back to second by the 1,000, and move on Harvard the whole way, but it is too late to catch them before the end. We lose by three-quarters of a length. Second place . . . and we are the fastest boat in the race. Are we starting to detect a pattern in my life here? 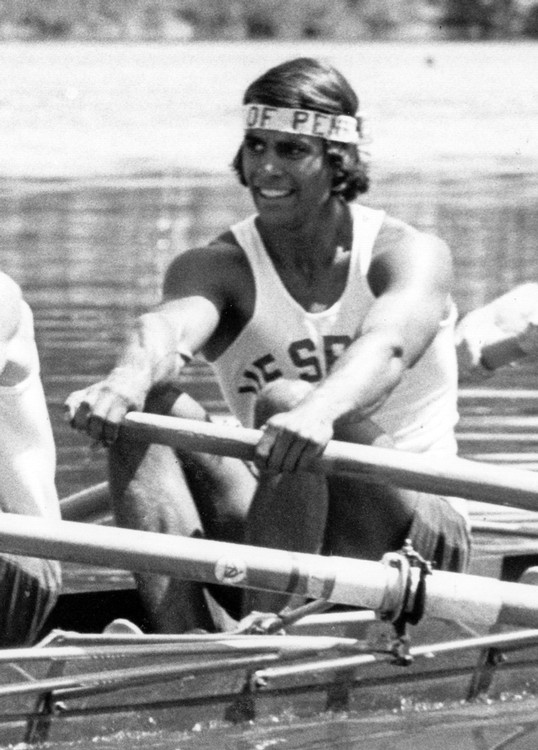 Guess how much credit I am due for identifying the incredible rowing talent of Mic Feld. Zero. Less than zero!

In the fall of 1970, on my first day of Penn graduate school, also my first day as a Penn coach, I am strolling across campus with my head in the clouds when Mic walks right up to me and says, "Hey, Mr. Mallory!" Seems he was a junior at Mercersburg Academy two years before during my last year of teaching there. He never was on the cross-country team, never in one of the classes I taught, but the school was small enough that yes, his name and face are a bit familiar to me . . . now that I take a good look.

We chat. Small world! What a coincidence! West Philadelphia is sure a big change from the rolling, rural setting where we had first walked past one another. Yes, I am studying for a master's degree in art history, coaching crew as well. Then we part, and I resume my stroll.

After a moment he calls back to me, "Hey, do you think I could try out for your team? Sounds like fun." Wait a minute! Isn't he about the right size and shape? I tell him the bus is leaving from Weightman Hall at 3pm. Only months later would I realize what had fallen into my lap.