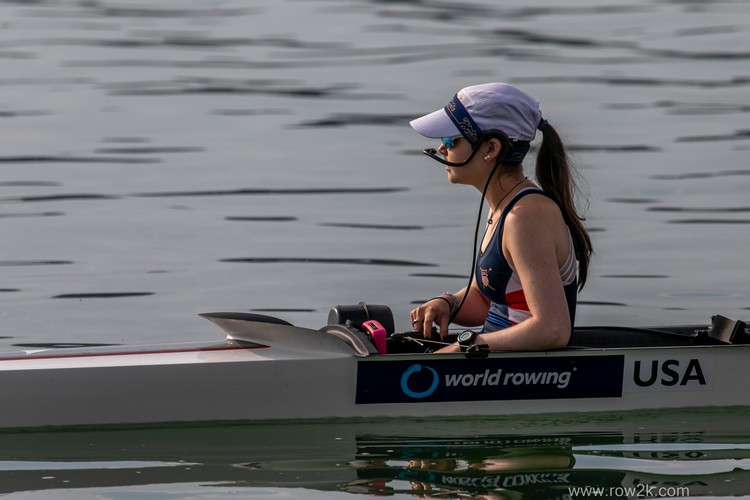 Next up In The Driver's Seat--where we hear from the folks who keep the shells straight--is coxswain and U19 World Champion Ella Casano.

Ella, who earned a driver's seat on 2022 U19 Team in the Women's Four, coxes the Saugatuck Women's 1V when she is not--ahem--setting World's Best Times in Europe, something she and her USA JW4+ did not once but twice in Varese, as covered here.

We spoke with Ella about those races after U19 Worlds, and she agreed to be our next featured coxswain In The Driver's Seat, so let's take a ride with Ella:

row2k - What are your top three essentials for being ready on Race Day?
Ella Casano - In my opinion, the top three most important things for being ready on race day are, first of all, making sure that everything you'll need for race day is ready the night before you have to race. Even if your race is later in the day, you don't want to have to be scrambling to find your racing uni, or your visor or hat, the morning of the race. So I always make sure to have my racing uniform set out, my cox orb and speed coach charging, and my bag all packed with everything I'm going to need on land and in the boat on race day the night before. 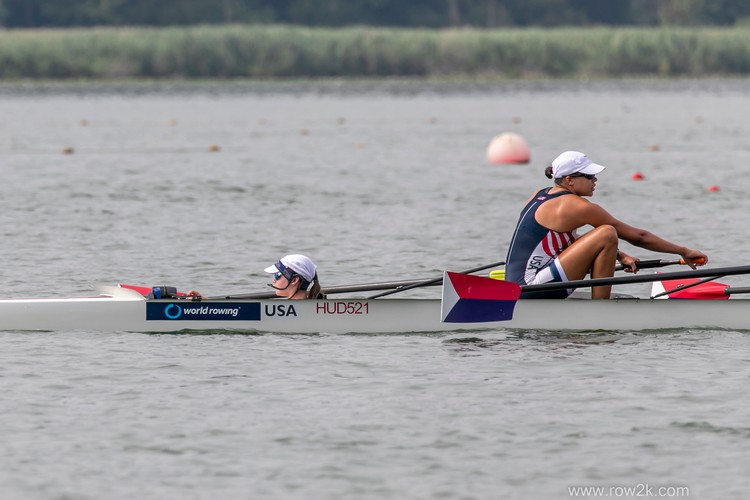 During a practice row in Varese

Secondly, it's super important to communicate with your boat on and before race day so that they know when and where they need to be at all times on the day of the race. Make sure that they have the address of the course, an arrival time, the racing uniform that they should be wearing, a schedule for everything that needs to be done when they're at the course, and any other little details that could be helpful to making sure your rowers are kept in the loop on race day.

Finally, there should be "nothing new on race day" for you or your crew. That means that as the coxswain, you should make sure no one is trying an exciting new food for breakfast, or a new energy drink before the race. The same goes for the race plan and warmup: your race day warmup should be planned out prior to getting to the course, and your race plan should already be made and discussed with your boat, so that everyone knows exactly what you'll be doing on the water, and is confident that those things will be beneficial to the success of your boat.

Also!!! It's super important to have the right mindset going into each race. Races are a lot of pressure, especially for a coxswain in most aspects, but it's important to remember that races are opportunities to test the speed of your crew, and your skills as a coxswain, and the little mistakes that (pretty much all coxswains!!!) make on race day are opportunities from which you can learn and grow. 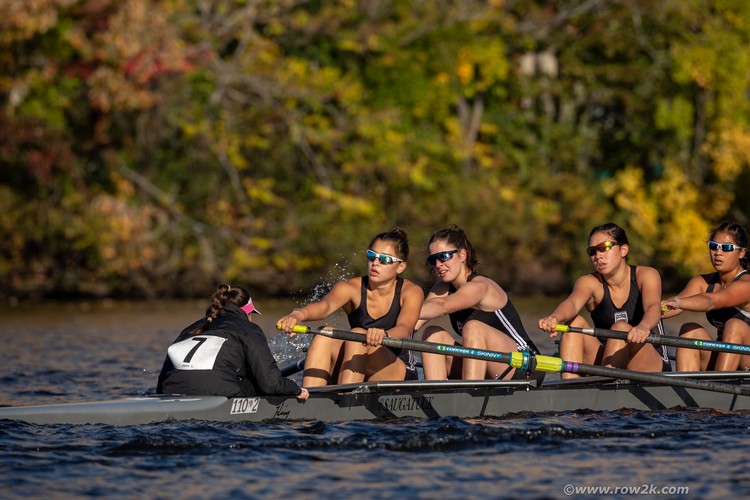 Racing the 2021 HOCR in the Youth Eight

row2k - What is your favorite drill to run with your crews? Any tips on how to the drill well, for maximum effectiveness?
Ella Casano - This is a tough question but my favorite drill would probably be the "reverse pick" drill, so top 1/4 slide, top 1/2 slide, legs only, add body, then add arms.

I like it because it helps the boat get together with timing out of the front end, emphasizing quickness but control at the catch, so that the whole boat is eventually on the same page: locking the blades in and finding connection to the water, and then immediately starting the leg drive together. I like to carry that focus throughout each point in the drill, so that by the time we get to full slide, the boat is hopefully able to have all of the rowers catching at one time, and then starting the leg drive efficiently and together.

I find that in general, for any drill, it's best to identify one or two focuses that are then carried throughout the entire drill, and I believe that it's important to check back in and give feedback on how the boat is moving throughout the drill as a result of those focuses.

Through working towards using that advice as best I can, I've found that the more confident I am in myself and in my abilities as a coxswain, and the more I'm able to portray that confidence, not only is that when my rowers trust me the most, but it's also when I just enjoy coxing the most, and I'm more comfortable with experimenting with new calls or different coxing styles, like working on ways to become more aggressive in competitive piecing situations. 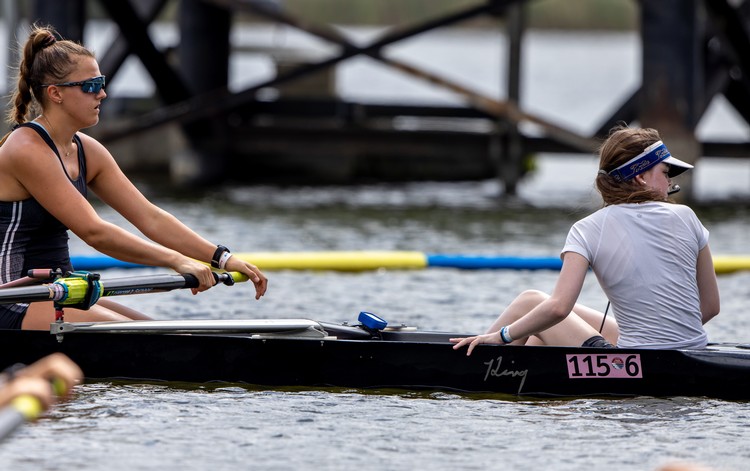 row2k - What is a mid-race call or move that you've made that you'll remember for the rest of your life? If so, what did it involve and how did you call it?
Ella Casano - There hasn't been one specific mid-race call or move that's really stuck out to me, but I've definitely called lots of 1k moves that I've learned a lot from. All of them were pre-planned with my boat, and some things that I've found in general that are super important when calling mid-race moves are to set up the move clearly and effectively, and then to learn from the move.

In the middle of the race, setting up the move to me means giving my boat the heads up that we're about to start the move, and then telling them all to commit to it, and/or giving us a goal to go with it, like getting to a certain seat on another boat.

Something I also like to do before the sprint or before a big move is count down from 5, building my voice through the 5 strokes, and then saying "now" at the end, so that before the five, the boat knows exactly when we're going. Then we come together as the momentum and excitement builds over those five strokes, and it's very clear on the last stroke that we're going "now."

Some of the most valuable mid-race moves I've executed have been the ones that we actually weren't happy with. During the beginning of my spring season at Saugatuck, there were a few races in which my boat and I didn't really feel like our middle move was as effective as it could have been, so we added focuses to the move to get on the same page as a boat with exactly how we were going to get faster technique-wise within the move, and that helped the move become more effective. 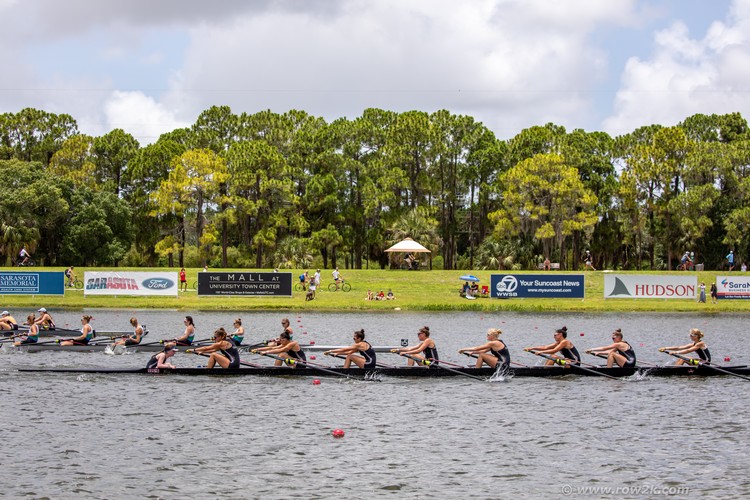 Taking the B Final at YNats '22

Likewise, in our preliminary race at Worlds, we didn't feel like our middle move was as effective as it usually is, so we talked about it as a boat, and we decided to really just get internal and focus in on the move when it came up in the final--on really committing to it as a boat--and that definitely helped.

row2k - Can you tell us anything about how you learned to call a good start?
Ella Casano - The best thing to do when calling a good start is just be super clear about exactly what your rowers are supposed to do throughout the entire start.

Before you start, make sure everyone is sitting at the correct slide position with their blades buried, and then make sure everyone knows exactly what start sequence you're about to do. If you're doing a start 5 with different types of strokes--like 3/4 slide and 1/2 slide--it's best to say the type of stroke you're taking each stroke, before you start to throw in other words. That way your rowers know exactly what position they're sliding up to each time, and your start is as effective as it can be.

Continuing through the start sequence, if you're doing some sort of build, or a high 15, be clear about what part of the start you're entering before you get there. Whether it's saying something like "shift in 2" or even just saying "high 10," just something that makes it clear where you are in the start, and what's coming next. Sometimes I'll say "ready" or "listen" before I call a shift, so that now everyone in the boat knows that they'd better pay attention so that they know exactly what we're doing next.

row2k - Best race/practice, or worst race/practice you've ever had?
Ella Casano - I can't say that one race or practice has been the best, or that another that has been the worst. I've certainly had good and bad practices and races, but ultimately, every practice and race ends the same way: My boat and I race, we get a result, and regardless of whether that result is good or bad, we learn from it and we adapt. 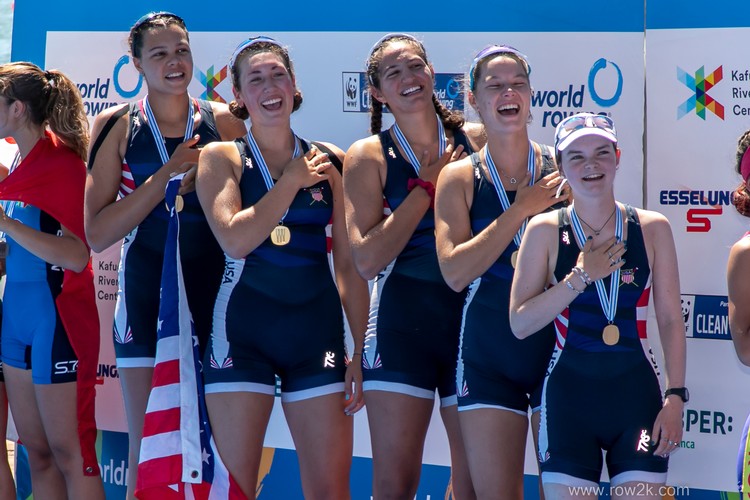 On the U19 podium with her crew

As for one practice or race that was particularly bad, what I'm about to say applies to some practices that I've had, but it also definitely applies to all coxswains: any race or practice that doesn't go the way you want is 100% okay, but if you don't learn from it, and if you do the same thing again the next day, or for the next race, that's not effective in adding to the speed of your boat. Every "bad" practice is a practice to learn from, and if you do that, that practice will really have been a beneficial practice.

Thanks for riding along with Ella -- and, remember, this column is open to all "drivers" out there, so if you are an experienced coxswain at any level--from juniors to masters--and would be willing to invite row2k to join you in your ride, just contact us here. We'd love to hear from you about what see from the Driver's Seat. 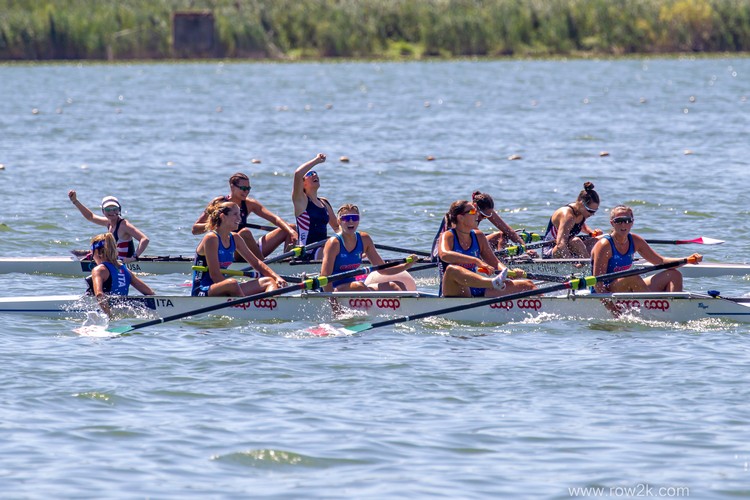 In the Driver's Seat, with Elenna Seguin