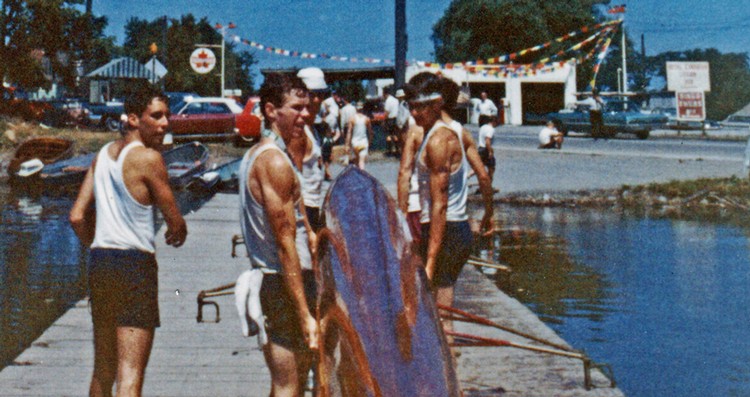 Canadian Henley 1966, Day 2, with two championship finals a nearly unimaginable 40 minutes apart. Saul Berman, an Ichabod Crane of a coxswain, all bony and angular, backs our eight into the start area, and all the best American and Canadian crews line up beside us. Just like yesterday, we come off the line in last place, but Saul deftly moves us through to take the lead in the final 500 meters. Saul wants to cruise it in and conserve energy for the next race, but I insist on a thirty-stroke final burst. I am in no mood to take chances. After all, we are about to win our second Royal Canadian Henley trophy, our second national-level championship, in less than twenty-four hours! 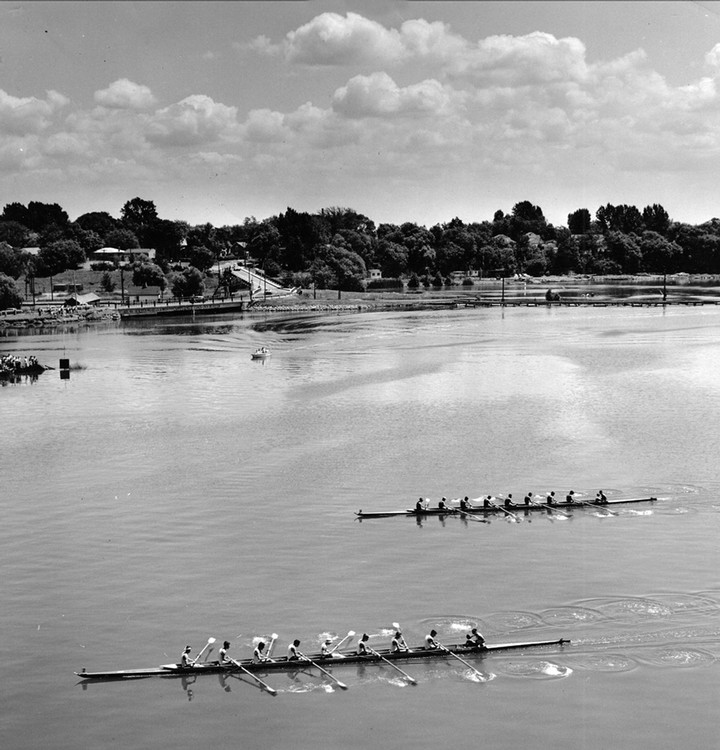 We cross the line a length ahead of the home team, St. Catharines Rowing Club. Over to the stands, collect our medals, and haul butt back to the dock. Just like that! Then things start going south on us. I'm antsy to get going again, afraid we won't make it back to the start line in time, and I'm hungry to make it three wins in a row. In fact, after a summer of dieting I'm just plain hungry.

It's sunny and hot here in Canada, and in this era before electrolyte-replacement sports drinks, our teammates hand us cups of steaming hot beef bouillon out of a thermos so that we can replenish the fluids and minerals we've sweated out during the previous race. All very scientific. Tom is standing next to me, animatedly describing in epic fashion and form our stirring sprint in the eight . . . when he burns his lip on his bouillon and drops the cup. A dollop of the hot liquid hits the dock and rebounds all the way up . . . and into my eye. Now I'm not just impatient. I am Polyphemus, and Tom Cassel is Nobody!

On that note, we shove off and begin to make our way back to the start line. Our opponents are already there. Saul and I sit in the stern facing one another while he orchestrates the bitching. Everybody's got an opinion. We all argue about everything and nothing - we even argue about arguing - all the way back to the stake boats. The gun goes off, and five of the six boats leap forward. Everybody . . . but us! Hokey smokes, Bullwinkle! We're last! Dead last! DFLWTFB!!! (as in "way back". You figure the rest out. Sorry. We were kids back then.)

That's okay. At least the infernal complaining has finally ended. Even Saul quiets down after our racing start is complete . . . Wait a minute . . . You know, we may be tired as Hell and all alone behind everybody else, but the boat actually feels pretty good. Smooth and swinging and light. Who cares about the other boats? Who cares about the race? Not me! I am rationalizing. I've already won my fair share today. But, what the Hell. I suggest to Saul that he tell everybody how good it feels. As usual, he's looking past me and not listening. Probably considering Keynesian economics or something.

Four hundred meters gone. You know, I think I can start to sense a couple of boats coming back to us. And our boat feels really good. The stroke is climbing. Effortlessly. I feel like a million bucks. "For Heaven's sake, Saul! Tell them!" The 500m mark passes, and Saul wakes up. We have moved from sixth to fourth, and all fatigue, all weight, all the cares of the world have fallen far behind us. At 600 meters we are pressing for second. Saul is in full song. His hoarse, raspy voice sounds farther and farther away as he tries to put into words what we already know.

We are Gods this day!

The four of us manning the oars propel Saul into the lead at 800 meters. By the 1,000 our opponents have disappeared behind us. The race has lost its relevance. We are flying with the wings of angels to the Pearly Gates of Heaven. The sky is an impossible blue. Have trees ever been so green? "Saul, is that a smile on your face? Saul, is this great or what? Listen, I have time now. Explain this 'debits on the left, credits on the right' stuff to me again. And this is supposed to be interesting, right? Are there accountants in Heaven, Saul?"

If anyone cares to look, the other boats are now water bugs on the horizon, their colorful jerseys, their painted oars glinting in the sunlight. See how bright they are! How they scramble! I listen with amusement to all the coxswains. They have come from all over the U.S. and Canada just to entertain me. Why do they hurry so? I observe from a cloud far above. I am a putto, a little angel on a painted ceiling in a Baroque church in Rome . . .

I'm having the ultimate out-of-boat experience!

The noise of the grandstand is growing close. I hardly notice. I wonder if I will want to stop at the finish . . . or keep on rowing forever. 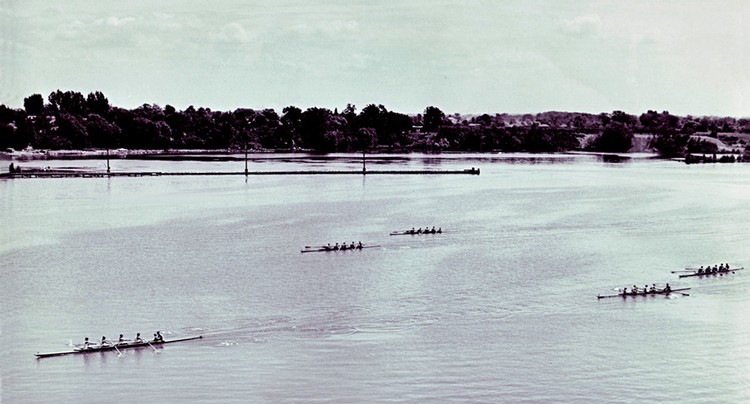 We cross the line, and something turns me around to make sure everyone has sensed the same magic I have felt. Their faces glow. Eventually the other crews creak and crash over the line, collapse briefly, then slink away. Waves of indescribable joy wash over our entire boat. It was the best I ever felt. In my life. Before or since. That memory will stay with me until I die.

Incidentally, I can report today that I, Mr. Art Historian, Frank Fraternity, Joe Jock, have spent 25 of the last 56 years practicing as a certified public accountant, just like my good friend Saul Berman. Isn't life grand? 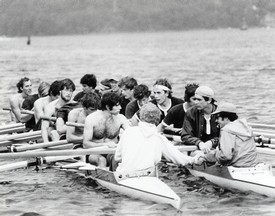