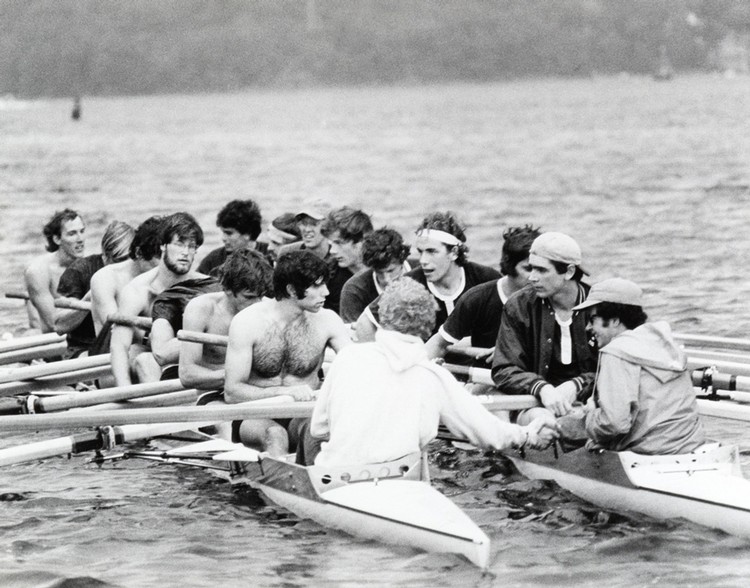 The following excerpt is from Hovey Kemp's self-published book that was previously reviewed here: "THE HAMMERS--The Story of Harvard's Underdog and Undefeated 1976 Crew."

A favorite photograph from my rowing career was taken after Yale had crossed the finish line, and the two boats were pulled together for the traditional practice where the losing crew takes off their racing jerseys and passes them over to their counterparts in the winning boat. It is a treasured image not because we won, and certainly not because of the rather medieval tradition it captures. The photograph strikes a deep chord within me because of the human emotions that it reveals, and because, at least to me, it shows the mutual respect that every rower has for every other rower, regardless of winning or losing. It is the respect that every rower at every level earns for having trained, for having competed, for having rowed as hard as he or she possibly could, regardless of the outcome.

The picture always reminds me of what Harry said in his carefully chosen words during our remarkable season. He told us that you have to give it your all to try and win, to put your bow ball first, but also that you have to respect, trust and enjoy rowing with the others in your boat. As long as you do those things, he taught us that there is no shame in losing. By teaching us those not-so-simple lessons, our '76 varsity was able to overcome our anxiety and win every race, regardless of the challenges that our rivals, mother nature, or even our own technical deficiencies threw down in front of us along the way.

Take a close look at the picture. Bruce is shaking the hand of the Yale coxswain. Not shown in the photograph is the fact that each of us would have shaken the hand of the man in the seat across the water from him. Look closely at the faces of Ollie and Don Grava, the Yale stroke, or George Aitken and Tom Rutherford in the four and five seats, or Jon White and the Yale captain Tim Wood in the bow pair of the two boats. To my mind, they all reflect the same emotions, as do the expressions of every other oarsmen up and down the two boats, even though one crew was victorious and the other was not. Respect for your opponent. Respect for what you and he or she just accomplished. Respect for what each of you put into it. Respect for taking part in one of the greatest sports in the world.

Hovey tells us that he has ordered a third edition printing run of THE HAMMERS. If you would like to inquire about availability, email him at jhoveykemp@gmail.com. Tell him row2k sent you.