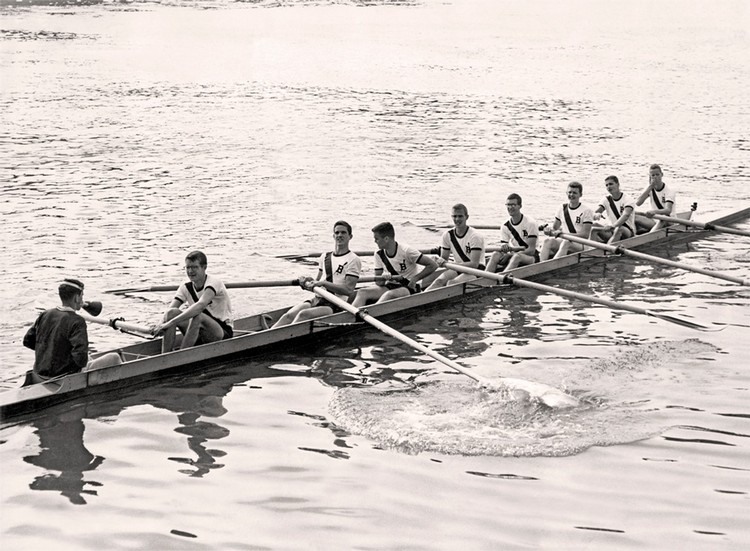 It's fun to contemplate how rowing experience affects people in later life. Peter Amram, who majored in classics at Brown became a Latin teacher at Wheeler girls' school in Providence. After Vic Michalson asked him to coach the first Brown women's crews a very precocious oarswoman named Phoebe Manzella noted that Peter laced his practices with classical references. Which no doubt made his crews go fast like Atalanta, associated with Diana and best runner in antiquity and certainly faster than any man. But if Atalanta did temporarily fade in a race, when she caught up with the man she speared him.

There are all kinds of stories about Atalanta and in the long history of crew at Brown University too. Atalanta was a clinker-built six-oared shell so heavy that Brown had little chance against Harvard, Yale or anybody else. But the lethargic movement of The Atalanta did not stop anybody from naming the Dartmouth-Brown race spittoon trophy The Atalanta Cup. We miss its handsome rivets. 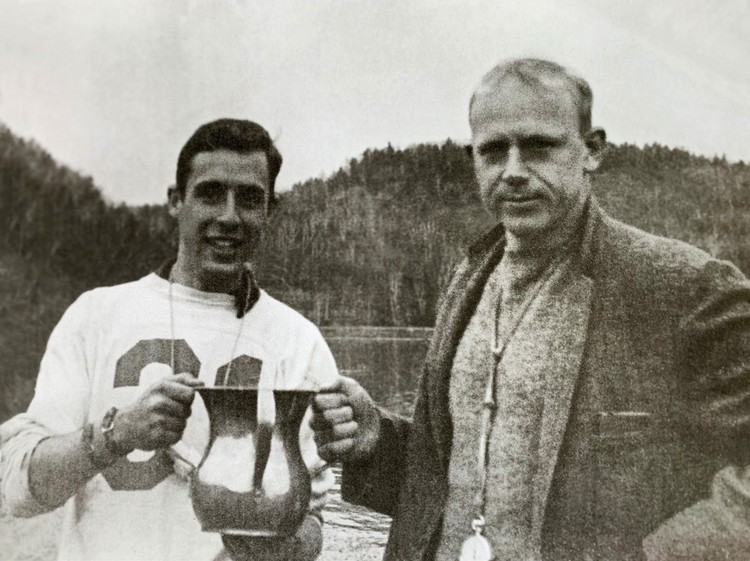 Tasker and Whitey with the Atalanta Cup – Dartmouth, Hanover – April 1960

See how alive John Taskforce is. And how Whitey looks like Steve McQueen. And how the Cup has a groove in it just like the porcupine.

Not only was the cup stolen by a workman during a renovation of the Hunter Marston boathouse but it is very hard in general to give Atalanta her due. A prime reason is that computers are determined to change her name to "Atlanta."

George Baum-- he spawned two sons taller than himself one of whom assumed command and saved lives when the Stanford varsity sank. This noble son then rowed for Oxford which was beating Cambridge until a drunken Brit swimmer out in the Thames (the Tems-- does not rhyme with James) got in the way and the Oxford coxswain decided to stop.

Marshmallow Basketball joined one boat club after another and rowed and rowed.

Phil Makanna confused racing shells with vintage airplanes and became the premier airborne photographer in the world. The brightest fire in Phil's photos and films however is the background landscape.

Although Bill Engeman's two sons made the national lightweight crew, he still gave them trouble in a single scull well into his fifties.

While living east of Cincinnati and wanting a place to shelter his single, Bill noticed that the Army Corps of Engineers had plans to turn Harsha Creek into Harsha Lake. At last count there were ten boathouses on the shores and a thriving high school program drawing crews from all over the Midwest. 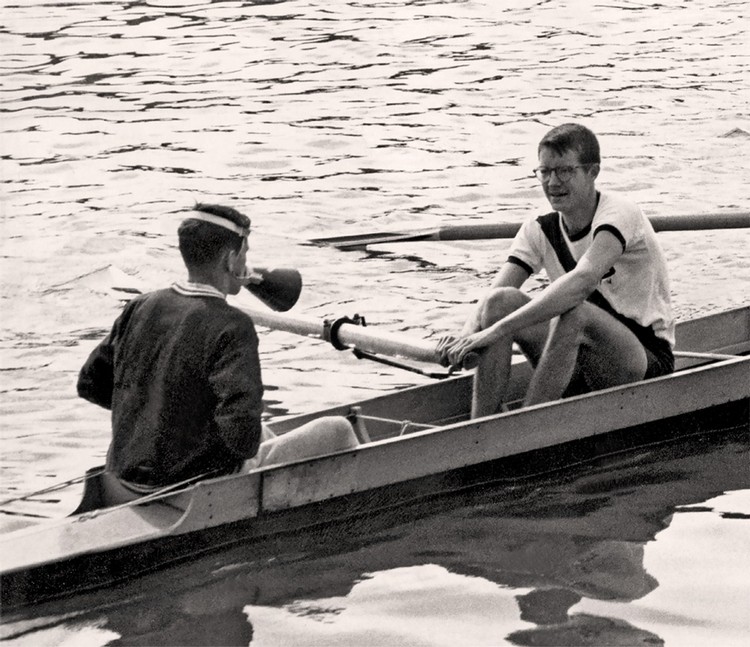 Philadelphia - 1960. Fedallah (Melville). Bill Engeman is as smooth an oarsman as ever was.

The biggest thing though was that he and Steve Gladstone and Harry Parker solved American rowing's age-old dilemma of not having a proper national championship in that the IRA (three miles) and Yale-Harvard (four miles) usually happened the same day.

The Cincinnati Regatta became the national men's championship for more than a decade until the men's and women's national rowing organizations took over. Yale and Harvard now row 2000 meters in the IRA and their traditional four-mile race in another week. Strangely or not, the longer distance never seems to hurt them for the shorter one.

Bill brought the best women to Cincinnati too, which helped shame the Royal Henley Regatta over in England into finally giving women their prominent place.

I was helping Bill with the Cincinnati Regatta once when too many reporters boarded the press boat so that it sank halfway through the race. But I was in a different boat closer to the action and got a first-hand story for the Brown Alumni Magazine.

I had been crew coach at West Virginia University on the Monongahela River and Skidmore College on Saratoga Lake.

I left other careers to go to WVU. I got the job with a timely application. The previous coach had taken the WVU women out at six a.m. in a fog bank.

The women looked up and saw a tugboat pulling a string of coal barges ten feet away.

The coxswain screamed "Row!" and the stroke her sister screamed "Swim!" and everybody swam.

The tugboat cut their wooden Kaschper in half. As the propeller went by it sucked off the women's pants. Subsequent litigation charged embarrassment, also that the tugboat's whistle didn't work. From the settlement the crews got a new Kaschper and the old one back perfectly repaired and other stuff too.

No one was hurt, drowned or killed. I got the job, gave the women to my assistant John Bancheri who went on to Marietta and then a Dad Vail Championship for the women at Grand Valley State.

Both John and I had winning seasons that first year although the men's 7-man, defying instructions spent the night before the Dad Vail with his Philadelphia girlfriend.

Caught in heavy traffic the next morning on Strawberry Mansion Bridge he looked down at the Schuylkill and saw WVU, who had recruited a WVU graduate substitute last minute from Vesper Boat Club racing underneath on the water.

WVU beat enough other boats to qualify for the semifinals but I considered the behavior of my crew criminal and turned them in. A highlight of that year was when Charlie Butt drove west from Langley, Virginia at a constant rate of 55 mph to help us out for a few days.

I coached one more year, both men and women this time. The Skidmore men-- without a huge pool to choose from-- won a few races but didn't do terribly well. The Skidmore women however, called "The Pulchra-crew" because of their great physical beauty, rowed at 28 strokes per minute in a 2000-meter race to upset St. John's and win the open championship of New York City, which was called "The Mets."

We, the Brown Cinderella Crew, are passing a pier on the Severn River in Annapolis. The old fisherman up top calls down to us.

This is the final chapter of row2k's serialization of FOUR YEARS AT FOUR. A very limited edition of the original coffee table version was published by GHOSTS books and calendars in San Francisco. Members of the Cinderella Crew paid for the design, publication and shipping. The book was written and prepared for them. One can see a preview at BLURB through this link: Four Years at Four. Any image that appears can be clicked upon or swiped across. All the pages will fan open electronically one at a time.

Philip Makanna began his career in aviation at the age of six making model airplanes in his parents' basement. He took a few years off and majored in Crew at Brown University. When he was a little older he got an assignment from WOMEN'S SPORTS MAGAZINE to go to Reno. There he met a few of the old airplanes and some of the dreams that he grew up with. Those moments in Reno grew to become his first book, GHOSTS, A TIME REMEMBERED, which was published by Holt, Rinehart & Winston in New York in 1978. Makanna has since published nine GHOSTS books the most recent of which is GHOSTS - AERIAL PHOTOGRAPHY. He and his wife Jeanie have published his GHOSTS calendars for 43 years. See more at https://ghosts.com/

John Escher thanks to mentors at Brown got to study fiction for a year with William Golding at Hollins College in Virginia during the popularity phenomenon of LORD OF THE FLIES.

Escher’s four Kindle books include a novel, THE PURSE MAKER’S CLASP, and a political book, THE LAST WORDS OF RICHARD HOLBROOKE. Because of new ideas, he has disavowed the technical information in two tennis books, A NEW YEAR’S SERVE and INNER SLINGSHOT. One of his proudest writing achievements is the official guide to a major American cult classic. Pamphlet title: THE MYSTERIES OF SHOOT THE WHALE, A FILM BY PHILIP MAKANNA.