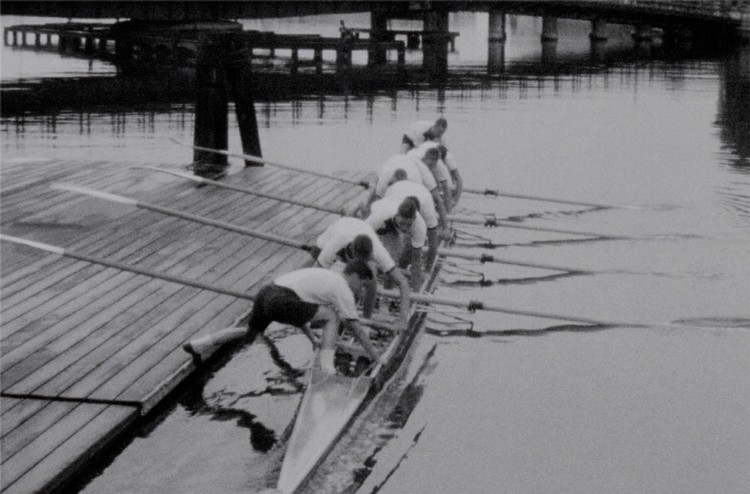 "All eight one foot in. Push."

George Baum wrote that everybody was lucky that there were no barnacles on the tall black spiles that the oarsmen shinnied up.

I'm looking for other peak experiences here before presenting a pair of silent movies in memory only starring Marshmallow Basketball.

One highlight came at a rowing reunion twenty years out. Returning to Providence, I was put into a shell at the 2-spot-- bad luck.

But the person at 3 directly in front of me was softly and concisely speaking in the time it took for us to sit down.

It was Peter Amram on evolution of technique in the decades since I was a Cinderella.

Peter was a Cinderella too. And we were by far the oldest members of this pickup crew that included Albin Moser (huge) and Dick Dreissigacker, who with his brother Peter had already revolutionized worldwide rowing through the invention of better oars and the Concept 2 ergometer.

From our first days in 1957 I had thought Peter Amram best of anyone at explaining arcane intricacies of the sport.

Additionally I needed new cue-level knowledge to become a crew coach myself and wanted to survive this alumni race-- a tradition my friend Charlie Butt Jr. had argued during NAAO coaching certification classes at Annapolis that should be abolished due to alumni everywhere ending up in hospitals.

Well, after I flew home to Morgantown I ended up in the WVU teaching hospital with a pulmonary embolism, but we held on to part of the one length lead the Brown varsity spotted us, after which Dick Dreissigacker made a nice speech about how he enjoyed rowing with us.

Peter Amram was coach of the freshmen boat that Dreissigacker and Moser rowed in-- the first Brown crew to win an IRA championship. Other crews can't cut you off all the time.

This thought about Peter Amram comes by way of a generality imparted by Charlie Butt when he came to the Monongahela to team-coach the WVU crews with me for an afternoon.: "Coaching in crew is more important than in any other sport."

So we were rowing along one day at a relaxed 24 when Marsh, 7, disappeared via ejector crab. We look around. Where is he?

Bobbing in our wake two hundred yards behind. We stop, turn around, go back and fetch him. He pulls himself up into the 7-seat, there to quickly explain that he was trying to feather with no wrist but just his little finger, and his blade was at the wrong angle when he hit the catch. Rowing people talk all the time about "catching a crab" and everyone does it. Most of these crabs are just a matter of one's blade getting stuck in the water if one can wrestle it out before the handle comes back and clobbers one. "Eight people plus the momentum of the boat all against you," I used to explain to my crews.

If you lay back fast enough in a middling crab the handle may strike you once on the chest and once on the nose or forehead before it snags alongside of the boat.

An ejector crab by contrast begins at the catch and lodges in one's stomach and shoots one out of the boat. 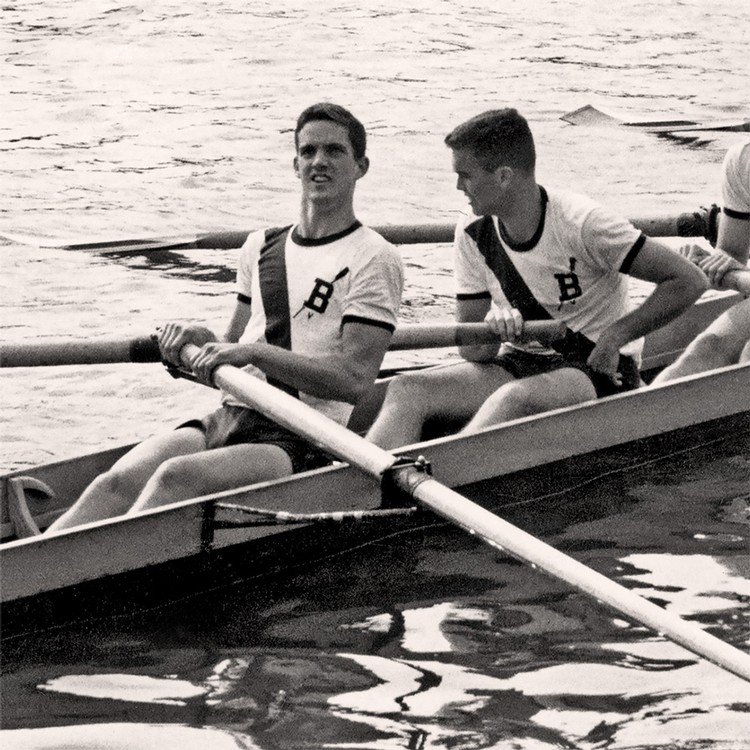 I avoided an ejector crab for all four years but it sure was fun to see Marshmallow's. (Today with the internet one can see one any time one wants.)

The second filmstrip, notable for its noise at the beginning and silence at the end was never shot either but recurs as a repeating mental loop at the Potomac Boat Club.

First Whitey thumped his wastebasket with the shoe. Slowly we crawled out of our bags and rubbed the sleep from our eyes. We dressed, went downstairs, laid out the oars, fetched the boat, set it in the water, attached the oars.

Normally Mouse gave verbal commands for some of this but since everybody seemed to know the drill on this particular morning he delayed the use of any words.

“All eight one foot in. Push."

A small sliver of water opened between the dock and the boat. Mouse and seven oarsmen put their weight in the boat.

Marsh, however, did a slo-mo split and splashed into the Potomac.

The raucous laughter that ensued woke everybody up.