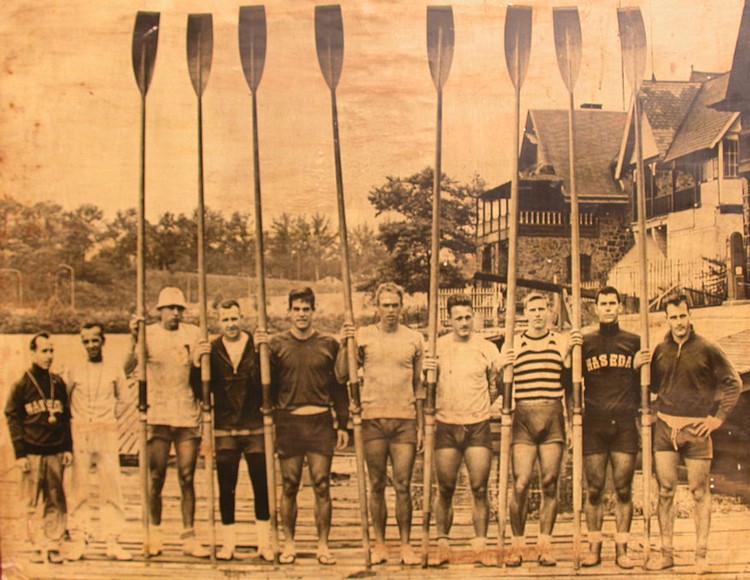 Meanwhile, back to our story, back to 1965 with my Penn lightweight teammates and me at age 20 getting our first taste of national-level rowing at Undine Barge Club.

Vesper's heavyweight eight had won the Olympic Gold Medal in Tokyo in 1964, so every stud in the country is trying out for their First Boat in 1965. When we weren't tormenting John Hartigan, we Undinian 150-pounders spend the entire summer doing 500- after 500-meter piece of interval training against not the Vesper lightweights but against the Vesper heavyweight Second Eight. Wow! No yelling in the boat during these workouts! We are totally focused. We lose by a seat, win by a seat, back and forth, rowing at 40 strokes per minute all the way, times around 1:25 . . . about as fast as a good man can run . . . darn fast for anybody in an eight back then . . . flying for lightweights! Every day there's a rumor, and we half-hope the Vesper Olympic Champion First Boat will show up!

We have a simply wonderful Undine Lightweight Eight. For example, years earlier our stroke, Larry Walsh, La Salle College High School, won the Philadelphia Scholastic Quadruple Sculls Championship . . . in a double! Two scullers in a boat against everybody else with four scullers, and heavyweights, not lightweights like Larry. (Rowing urban legend #2 . . . except this one is true!) And we have old guys, guys who have rowed for years and years. Not as old as John Hartigan, perhaps, but nevertheless guys who already have to shave every day or two! Unlike me. I am the rowing baby of the boat, only barely past my teenage years, and I have been training seriously for just over one year.

All summer before the U.S. Nationals we compete locally in doubles and singles, but we never get to enter our eight in a big race, a race that actually counts. Can't go to the Royal Canadian Henley, that greatest of rowing spectacles on the North American continent - somebody has an actual grown-up excuse, a job conflict or something - so for us it all comes down to the U.S. Nationals on Hunter Island Lagoon beside Orchard Beach in the New York City borough of the Bronx, not 15 miles from the Empire State Building in Manhattan. Look! You can just make it out in the distance above the tree line.

Final only. Six entries. One shot at immortality. Our debut.

Just the summer before, Hunter Island Lagoon had hosted the 1964 U.S. Olympic Rowing Trials, the year that Vesper Boat Club had bested all comers on their way to Tokyo Gold, and a very special buoy system, the first of its kind in the Western Hemisphere, was still installed on the course when we arrive a year later. 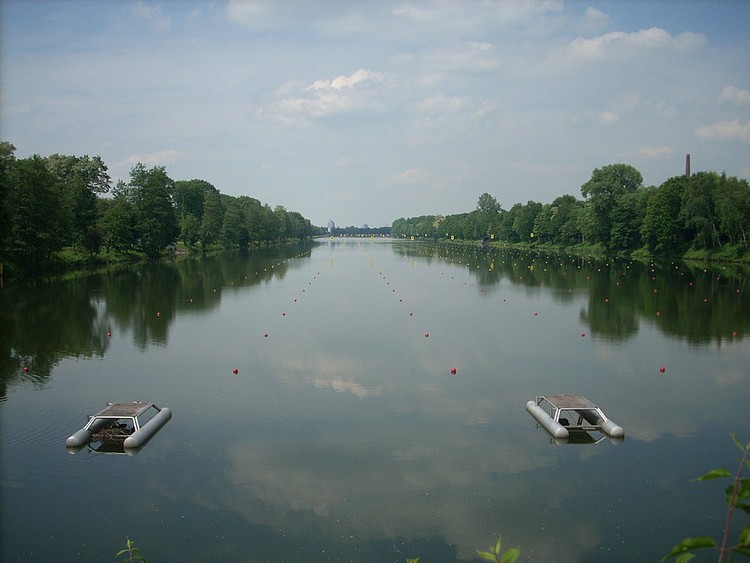 This is what an Albano Buoy System is supposed to look like!

The "Albano" buoy system had first been used five years earlier at the 1960 Rome Olympics on Lago di Albano, hence the name, and it was used again at the Tokyo Olympics. With an Albano system, each of the six rowing lanes is marked on either side along its entire length with a line of buoys spaced out every 10 meters or so and anchored below the water's surface to cables that run from the start to the finish. These days such systems are common around the world, and each buoy is soft and unobtrusive. Back then on Hunter Island Lagoon, each buoy was a primitive, cumbersome affair, heavily weighted so that it could sport a snappy triangular orange pennant atop an 18" wooden dowel without blowing over in the wind. Made for quite a spectacle, I must say, as the breeze swept across the course from nearby Long Island Sound. Very festive.

It's a lovely August dawn, not a cloud in the sky, as we strip to our skivvies to weigh in on the lawn under the trees, surrounded by upturned shells waiting on slings for their oarsmen to carry them down to the dock later that day. Dr. John Sack, the tallest in our boat at 6'3" or more, how much more I cannot tell you from my vantage point several inches below, Jack looks especially skinny in his sleeveless t-shirt. The sun has obviously rarely touched his shoulders, and this is the first time that he has actually made weight all summer. Saul Berman, our coxswain, is sporting a railroad engineer's hat. Billy Mastalski is actually tanned under his shirt. He had done most of his rowing at Malta Boat Club, down the Row, but came to Undine to row for our Fred. After years in group showers, most of us are quite comfortable with our nudity, but my roommate for the year, Milt Rossman, years away from becoming the boat's second MD, remains embarrassed to be nearly naked out here en plein air. Don Callahan, coached by Fred when he was at the Haverford School and now rowing for Trinity College in Hartford, Connecticut, is joking to mask his relief at having made weight, and Bill Wark, our bow-man, is quiet as always, wearing glasses that make him look studious and thoughtful. For our stern pair, Rick Manno and Larry Walsh, this is old hat as they wolf down bread and honey after the whole boat has been stamped and certified lightweight.

I am nervous, keyed up. I have dreamed of this day for a lifetime and worked every day for a whole year and more now. It had seemed an eternity, and now it's unfolding before me with increasing alacrity. I am sliding down a rabbit hole. This afternoon as we row to the start line, I feel like puking. I settle for peeing in my pants, by now a Mallory tradition.

We have been assigned one of the middle lanes. From the start, you can turn around and scan down your lane, and it looks like a bowling alley with the orange flags on either side . . . all the way to a vanishing point 2,000 meters away on the horizon. Festive indeed!

Two boats to our right, three to our left "volleyed and thundered!" In 20 strokes we are open water ahead, just . . . like . . . that . . . Oh my! All the nervousness washes away in an instant. I am in the 2-seat and can see everything. After our start, we settle to a low 35 strokes per minute. After all those 500s, this must be the lowest we have ever rowed this boat in anger. Everything . . . is . . . in . . . slow . . . motion. Our opponents' colorful jerseys, their painted oars glinting in the sunlight. See how bright they are! How they scramble! The other five boats on the course with us are all neck and neck with each other. I listen with amusement to all the coxswains. They have come from all over the U.S. and Canada just to entertain me. I float overhead. I observe the race and my teammates and myself from far above, from a great distance . . .

I'm having my first-ever out-of-boat experience . . . 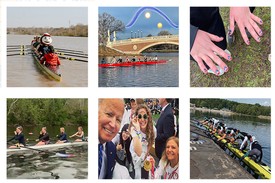