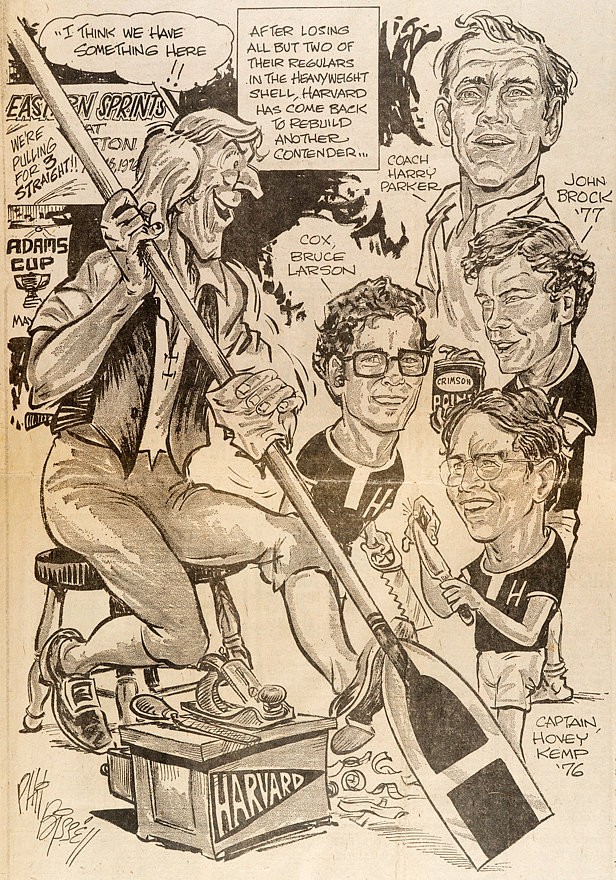 The following excerpt is from Hovey Kemp's self-published book that was previously reviewed here: "THE HAMMERS--The Story of Harvard's Underdog and Undefeated 1976 Crew."

In 1976, the Sprints were held in mid-May on Lake Carnegie in Princeton. The winners would be declared the top crews in the East. Despite our undefeated record, there were still plenty of doubters out there who were not sure we were good enough to claim the title. The Boston Herald Advertiser, however, was clearly in our corner. As shown in the image above, a great cartoon by Phil Bissell ran on the Sunday before the Sprints under an article by Dick Dew that boasted a headline that read: "PARKER'S HARVARD CREWS JUST KEEP ROWING ALONG."

At the Sprints, there were three preliminary races in the morning, with the top two boats in each heat advancing to the afternoon final. In our heat we dispatched the challengers, beating a resurgent Boston University crew to the finish line, sending Yale and a couple of other crews to the consolation finals. We did not feel particularly pressed and rowed the race not unlike our preliminary heat back in April at San Diego-we rowed hard enough to qualify for the final but preserved as much energy as we could. Our time was not that fast: 6:20.9.

As a result, hopes soared among our competition when the winning times of the next two heats bested that time by quite a bit. Amy Sacks was a talented writer for the Harvard Crimson who covered rowing. As she put it in The Harvard Crimson's sports pages, "All the other qualifying aspirants (Penn and Wisconsin in particular) turned in faster times than the Crimson."

For example, Wisconsin's time was 6:17.6. As a general rule, due to their winters, the Wisco crew gets on the water much later in the spring than the rest of the crews who compete in the Sprints. This meant that since their fourth place finish at the Crew Classic in San Diego, they had no doubt picked up a lot of speed over the course of their season.

Jabo, the Wisco coach, was quoted in The Boston Globe on the day before the race: "It should be an interesting day. We're the fastest we've ever been coming into the Eastern Sprints. I think we're moving fast enough to be competitive. Not for the top six, but for first." Ted Nash, the coach of Penn, was quoted in that same article, saying, "If Harvard takes a bad stroke, there could be any one of six boats there. Seven crews could win this race." Besides Wisconsin and Penn, Princeton and Brown would be joining us and BU in the afternoon final.

As we reviewed the results of the morning races, our feeling was that the time differentials were at least partially the result of slackening headwinds over the course of the morning, but that fact did not dampen the excitement in the camps of Quaker and Badger faithful. We had no doubt that Ted Nash, Jabo and the other coaches whose crews had reached the finals were going to be revving up their crews as the afternoon race for the title approached.

As John Powers of The Boston Globe reminded everyone: "This was supposed to be someone else's year. An Era of Strange Jerseys. None of them Crimson. After all, Al 'The Bomber' Shealy and most of his friends had gone and Harvard's heavyweight crew dynasty was going with them, wasn't it?" Then, on a rather deflating note that probably juiced up our rivals even further, the Harvard JV, which had high hopes of avenging their recent loss to Penn, could not muster the speed to do so. They came in 5th in their final, behind Penn, Navy, Northeastern and Wisconsin.

Prior to boating, Harry called us together and expressed his confidence that we would have one of our best rows. He said we should not be surprised if some of the competition tried to jump out on us, and he encouraged us to keep the faith and row through them all. He exhorted us to lay it all on the line from start to finish.

As the afternoon final for the varsity heavies approached, the headwind from the morning events reasserted itself and, unusually, a rather thick fog descended on the race course in Princeton. Visibility for the spectators that lined Lake Carnegie became an issue. Indeed, by the time we left the starting blocks, the crowd at the finish line could see only the final 500 meters of the course.

For the first 1500 meters of the race, the fans that had gathered near the finishing buoys to cheer on their crews had to rely on the public announcer who was reporting from his microphone as he followed the crews down the course in one of the trailing offcials' launches. According to Ms Sacks' reporting in The Harvard Crimson about the race, the announcer called the race as though he was at Churchill Downs calling the Run for the Roses at the Kentucky Derby:

Penn is out, Princeton is out.

B.U. is third. Harvard is fourth, ahead of Wisconsin and Brown. Princeton by a seat. Penn.

As the race unfolded, Penn's fast start put the Quakers in first place through much of the first 500, but Princeton and Wisco were moving. Ms Sacks' typically colorful writing tried to keep pace with the man with the mike:

Wisco has taken first place. We're at the 500 now and Harvard is fourth. Harvard is rowing at a 35. Harvard is now making a move."

At 500 meters, Wisconsin had a two-seat lead over Penn and Princeton. The Badger crew doggedly held on to its slight edge, rowing at a higher cadence than us. Bruce and Ollie calmly held our cadence at 35 as we trailed the leaders. The Boston Globe reporter framed the scene as the boats moved down the course:

"It was interesting for 1000 meters or so, as it usually is. Wisconsin, with unusual early speed, led by a deck length through most of the second 500, with Penn and Princeton jockeying for second, and Harvard lying in the weeds. But when the Crimson felt like taking command, they simply walked on by. There was no sudden upwards lurch in cadence, no power sets."

The usually understated Bruce Larson was quoted at length (for him) later that day: "We just went cruising by," he told The Boston Globe. He was even more expansive in telling The New York Times, "We didn't take ten power strokes or anything like that. We just passed them and kept on going."

For her reporting, Ms Sacks turned first to our bowman, Jon White, who said, "I knew it was just a matter of time before we'd take them. At 1200 meters, it was like we took them all at once. Then we were just out of there and we knew we were home." With 500 meters to go, our lead was half a length over Wisconsin, while Penn and the other crews were falling back. We cranked it up for the sprint and won by a full boat length. Wisconsin was second and Penn came in third, followed by Princeton, Brown and BU.

In an article about the Sprints in The Oarsman (the offcial publication of The National Association of Amateur Oarsmen), Dick Prentke did a nice job of summing up the race in the May/June 1976 issue:

"The start was fast and even. Princeton had an early lead but soon fell a close second to Penn after the settle. At 500 meters, Wisconsin rowed through Penn and Princeton at 38.

Harvard stayed only a few seats behind Wisconsin, and at 1000 meters it looked like anyone's race. Then the Cantabridgians, three strokes below Wisconsin's continued 38, simply rowed away. No power ten or rating increase from Ollie Scholle's stroke seat was discernible.

From the shore, the Harvard eight was not an unfamiliar sight: like previous editions, not only was it going fast, but it gave one the seemingly self-contradictory impression of effortlessness created by a great effort of will. The eight Harvard upper bodies displayed quite extraordinarily hard pulling at exactly the same moment and with the same elan, and the boat surged further into the lead.

The Harvard victory was by one length over Wisconsin. The rebuilding-year crew was satisfied with its sternest test, and amidst the serious yet occasionally smiling, eager yet sometimes embarrassed visage of Harry Parker, was the clear sign of deserved satisfaction as well." 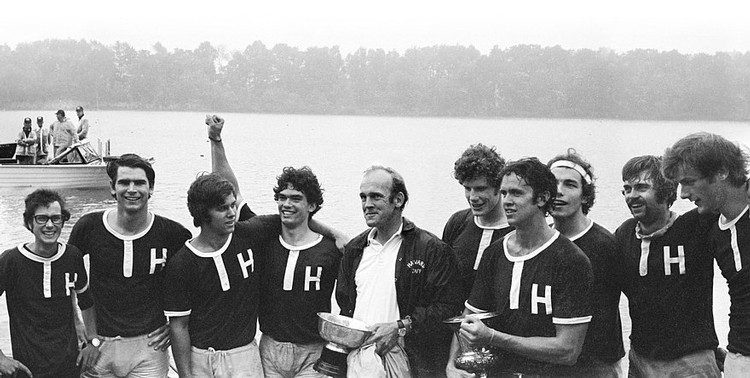 Ms Sacks also quoted me in her Crimson article following the victory, and in my excitement I'll admit I went over the top a bit: "The only thing I can say is that this is the greatest bunch of guys. I mean, these are the ballsiest bunch of guys. They had every chance to get psyched out and not one of them folded. I want you to say that. They are the greatest!" 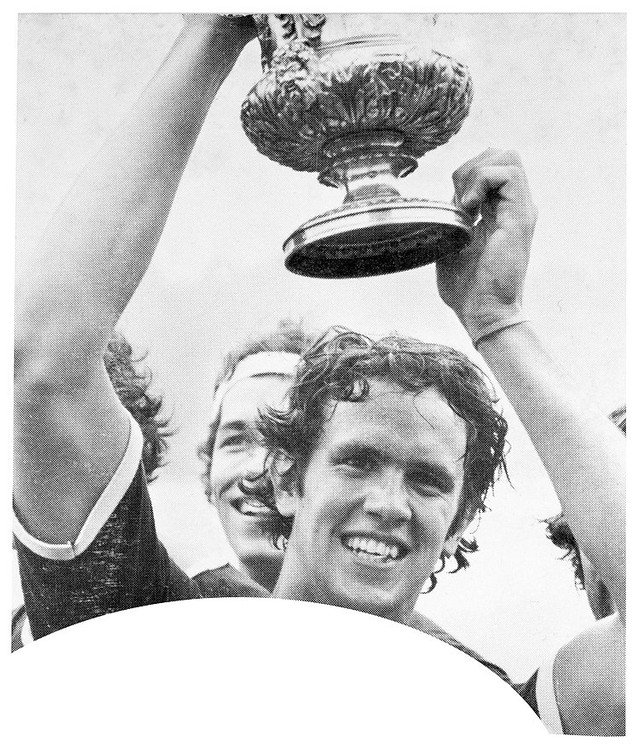 Kudos in the press aside, in my mind, the picture of our boat that graces the cover of this book does the best job of capturing the moment, as well as the heart and soul of our underdog crew. The black and white photograph was one that Dave Matthews of the Harvard Athletic Department took of our boat as we rowed away from the awards ceremony on the docks near the finish line on Lake Carnegie. The photo first appeared on the cover of the Harvard Varsity Club's News & Views on June 16, 1976, seen below: 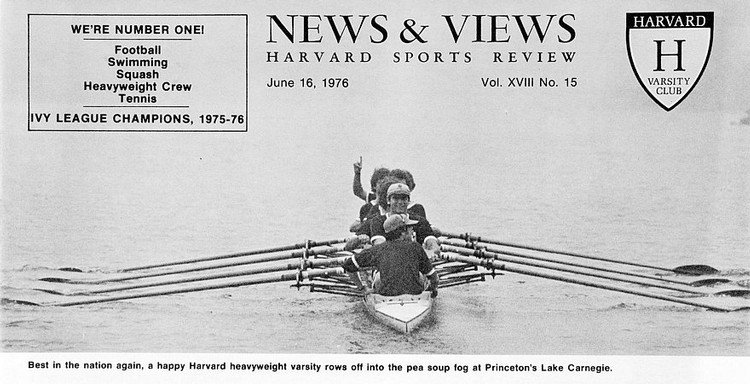 After our victory, as we started to row back to the Princeton boathouse from the awards dock, there was Bruce, our outstanding cox, looking out at the cheering crowd on the banks. There was Ollie, with a broad grin under his tattered Salisbury School baseball cap, a "good luck" talisman he always wore on race day, insisting that he had never lost a Harvard crew race while wearing it. Behind Ollie, no one is recognizable-seven other faceless, "no-name" oarsmen-first place medals hanging around our necks. At the end of the lineup, there was our bowman, Jon White, holding up his right arm and hand in the classic "We're Number One" sign. And we were.

The Sports Illustrated article that reported on our victory and our season was called "A BANG-UP JOB BY THE HAMMERS" and stated "Harvard had just won its 10th Eastern Sprints title in 14 tries under Coach Harry Parker, its third consecutive national title." How sweet it was.

Hovey tells us that he has ordered a third edition printing run of THE HAMMERS. If you would like to inquire about availability, email him at jhoveykemp@gmail.com. Tell him row2k sent you.