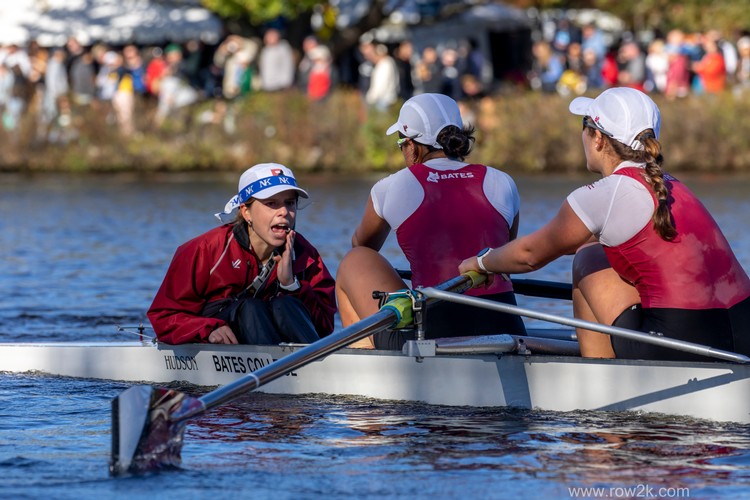 Next up In The Driver's Seat—where we hear from the folks who add that extra something to the teamwork of a crew—is coxswain Lucy Del Col.

Lucy, a sophomore at Bates, got her start in coxing at Noble and Greenough School and is in her first year driving the first women's Varsity 8 for the Bobcats, the defending NCAA D3 Champs from 2021.

Let's take a ride with Lucy, In The Driver's Seat:

When I first started as a coxswain, it felt like an overwhelming amount of information to learn. However, the first thing that I realized was I needed to step up and act like I knew what I was doing from the very start. This meant being confident in myself. As I learned more and more skills, my confidence just grew. I’ve found that a confident coxswain makes for a calm crew. When your rowers know that you are confident in yourself and what you are doing, they will feel assured that you have everything under control. 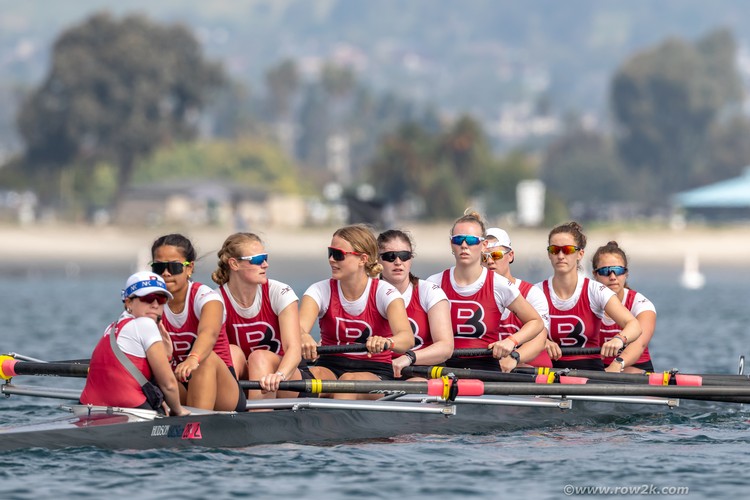 Setting up for the heat at the 2022 Crew Classic

Paired with confidence, you need to have trust. Knowing that confidence can go a long way but earning the rowers’ trust is very important as a coxswain. You can do this in several ways but I’ve found that giving trust will help you to gain their trust. For example, I trust my rowers to move when I call them to and they trust in me to make that move at the right time. Trust within the boat will also help to create open communication between the rowers and the coxswain. When there is open communication, you can find out exactly what the rowers want to hear and apply that to your coxing.

row2k - What is your favorite drill to run with your crews? Any tips on how to do the drill well, for maximum effectiveness?
Lucy Del Col - My favorite drill to run with my crew is rowing with a pause at the release. It’s a pretty simple drill but I think that it can be very helpful for boats at any level. I always think of the release as a reset button. If you have an off stroke, you reset at the release to come up the slide sharper and ready for the next stroke. While rowing continuously, you can think about this reset but it is not as clear as to when you add in the pause. When that pause is there, it gives the boat time to think about what they can work on for the next stroke. It forces them to collect themselves, giving them that physical reset.

It is important to remind the crew to think about this while doing the pause because it can be easy to go through the motions without being intentional about the idea of resetting. 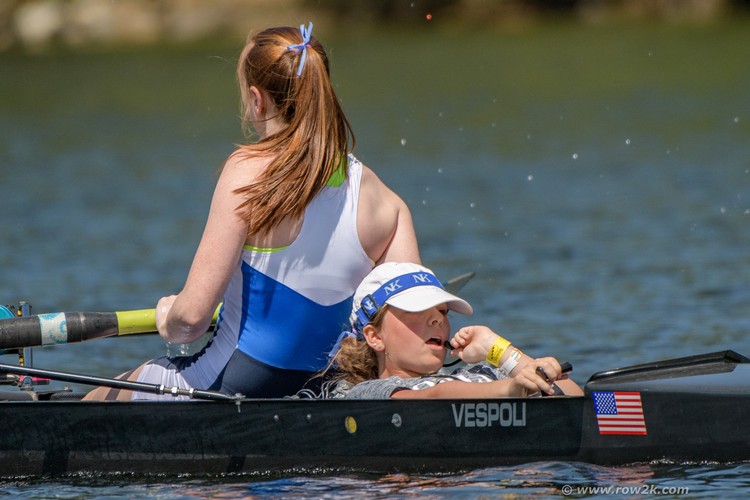 row2k - What's some of the best coaching advice you've received about your coxing?
Lucy Del Col - The coaches that I have had over my years as a coxswain have allowed me to advance by placing their trust in me. They allowed me to grow through trying things and I think that has continued in my collegiate career. My coach at Bates, Peter Steenstra, always tells the coxswains that we already know what we need to do. Whenever I second guess myself, he stands firm on the idea that I know what I’m doing. This has shown me more about myself and what I can do than I would have been able to see on my own. I think that this is even something that new coxswains can implement in pushing themselves to use their instincts and, as I mentioned before, to be confident in themselves.

row2k - What is a mid-race call or move that you've made that you'll remember for the rest of your life? What did it involve and how did you call it?
Lucy Del Col - This year, I found that it is very easy to go into a race with a specific boat in mind. It is easy to say that if we beat this crew, then we were successful in our efforts. My boat has been working on staying focused internally while trying to push ourselves to be the best that we can be. Because of this, I have started making a call to “make this boat the fastest we can be.” Every race or practice that I have made this call, all eight rowers lock-in and you can feel the boat pick up so much more. There was a race earlier this season where we could have just sat on the other boat’s bow deck and stuck right with them all the way to the line. I called to “make this boat the fastest we can be” in two and we moved to open water on the other boats in the race. At that moment, it felt like we made a collective decision to never settle for anything less than our best. 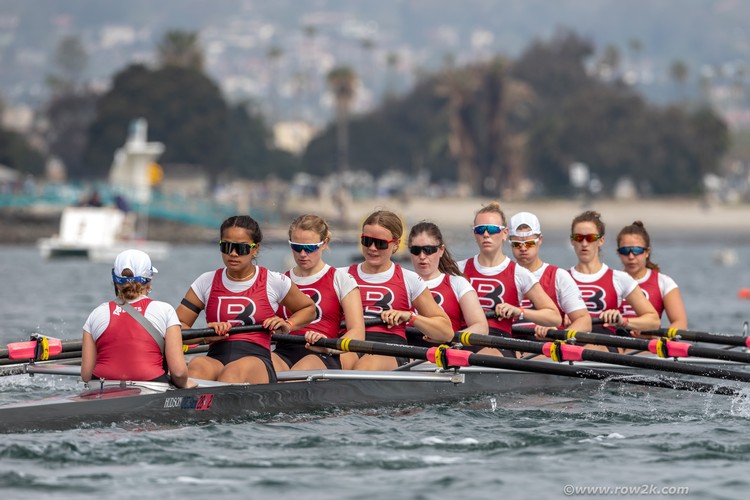 row2k - Can you tell us anything about how you learned to cox a land practice or erg tests?
Lucy Del Col - I did not cox too many erg practices in high school so that was something pretty new to me when I came to Bates. The first thing that I learned was how loud I needed to be. I found myself needing to project and move around the room to help my voice carry to everyone.

Coxing on land also allows you to see everything and gives you a chance to work on individual technique with the rowers. Because of this, I find that a lot of my calls in the erg room are either about timing or technique. Coxing on land can feel very different, but if you bring a lot of energy and devote time to learning technique on the erg, it can be very effective. 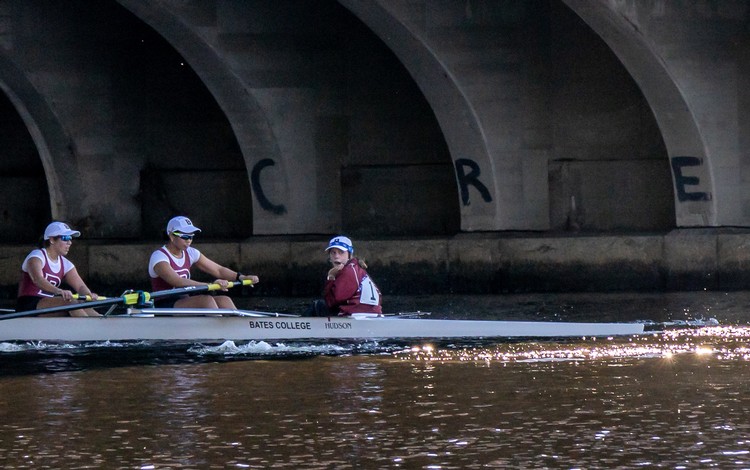 row2k - Best race/practice you've ever had?
Lucy Del Col - My favorite race that I’ve coxed was earlier this season against Wellesley College. When I first arrived at Bates, I learned about our race plan but did not race my whole first year. This year, I had to put blind trust in our race plan, knowing that it had worked for others but never being a part of that success. When we raced against Wellesley, we knew we would not move out off the start. Instead, we are a crew who moves through the middle of the race. I called for each section of the race plan and trusted that the boat would move when they needed to. It was executed beautifully. I no longer had to blindly trust the plan but had seen it work right in front of me and that was an amazing feeling.

row2k - Worst race/practice you've ever had?
Lucy Del Col - Thinking about my worst race/practice brings me to the idea of coxswains needing to learn from their mistakes. I had a few races at the beginning of my high school career that I think back on and can find connections between what I did negatively affecting the result of the race. Sometimes I will have bad practices where I find myself thinking that there was something I could have done to change the outcome of the practice. I remember getting in a friend’s car after one race where I felt like I had lost the race for my crew and as I was explaining everything that I thought I did wrong, her parents said to me, “Well, at least you will never do those things again.” I have taken that advice with me throughout my years of coxing to allow myself to move on after bad races/practices and to remind myself that it will ultimately help me get better. 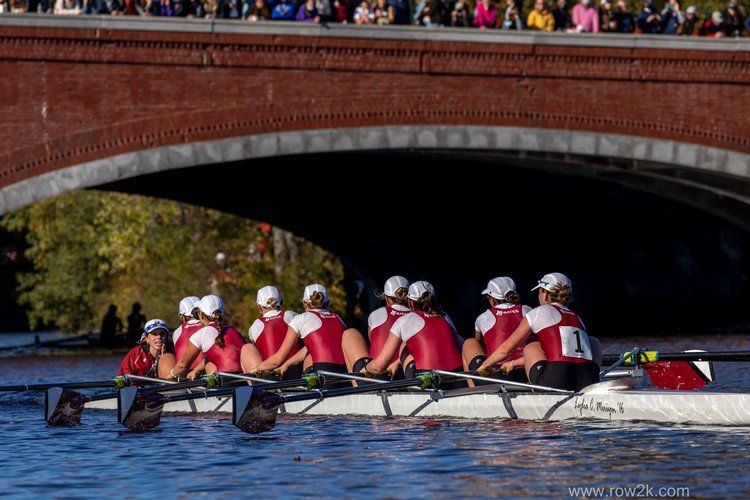 In the Driver's Seat, with Gabriela Rivera

In the Driver's Seat, with Piper Higgins