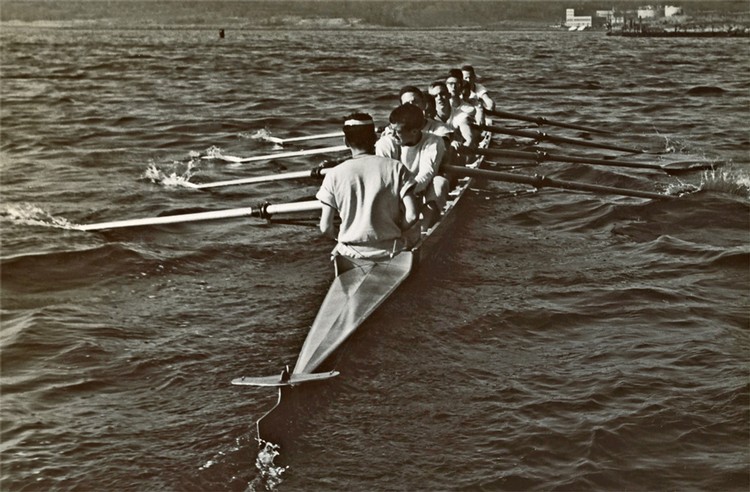 All Brown crews are rough water crews. Photo by Whitey

President Keeney's idea for a peaceful transition to varsity sport recognition was that we as the only people on campus who knew anything about crew would handle all the details. How much that idea came to pass I'm not sure but we were permitted to interview three candidates for Whitey's position by letting them coach us for an afternoon. The existing Columbia coach, former Menlo Park leader Dewey Hecht the Melbourne gold medallist in pairs, and Vic Michalson the freshman coach at Syracuse.

It always has amused me that Michalson and Marston, old Navy men, became good friends, and that when Marston would come to home races Michalson would assign an extremely attractive mother of one of the Brown oarsmen to keep him company.

This strategy I like to think resulted in the Hunter S. Marston boathouse.

But how much does rowing equal stroke rates or dollars and cents? I stand with Jamie Koven in asserting that what is of truest interest is what went wrong. Or to take this another step, the disasters, transformations and epiphanies.

It is the regularity of good rowing along with its rituals that make any interruption or change seem so alive.

At some time in my four years at 4 on the Brown crew there was a series of days where we rowed so many miles that we fell apart. The setup (balance) was awful. We were lurching and splashing and crabbing and displaying great physical weakness. "Bottle," Mouse cried. "Your puddle is purple."

Either Mouse in the stern or Whitey from his motorboat tired of correcting our mistakes and indicated for us to go ahead and exaggerate our personal mistake whatever it was. In a moment as sudden as a thunderclap the crew came together. Not only did the boat set up but we had jelled, would swing and never be the same.

The momentum of Whitey's passionate coaching and penchant for long full pressure rows continued to meld our technical flaws and ensure seat security since even the slightest change in the boating was sure to slow us down. Further, our accidents were of proper severity. We experienced no deaths from drowning or more likely hypothermia but we did spear the hoop on a small white buoy while we were taking a racing start in a small harbor in mid Rhode Island. The longitudinal collision caused us to flop on our backs but didn't break off our bow and we were able to row home safely to Providence.

In Google Earth one can see how Narragansett Bay narrows at its top and divides into estuaries that branch to the left (Rhode Island) and to the right (Massachusetts). Much water runs up the Providence River and then northeast up the Seekonk. The NBC is about a mile up the Seekonk. Brown's more present rowing home, the Hunter S. Marston boathouse, is located at the juncture of the two rivers called "India Point."

With a name like "India Point," urban renewal or not, the area should be international and is/was, with freighters docked along the bank just south from the Marston boathouse.

We used to take racing starts at the foot of College Hill in the city center's geometrically straight canal that narrowed into the open sewers that caused novelist John Hawkes to call Providence a "fetid" place.

One day on the side of that canal a woman staring at our forty-four strokes per minute racing start-- you could see astonishment on her face-- ran her car flush into a light pole.

I don't know if anyone else saw this accident. But I from the 4-seat did see it. And I can't know if the woman survived. We were too quickly gone. Our racing start took us back out into the Providence River.

That silent car collision pushed so rapidly out of view and out of mind was a nasty and abrupt interruption to the smooth tic-toc of stroke by stroke reality.

Just as was the great spearing on the edge of the porcupine. 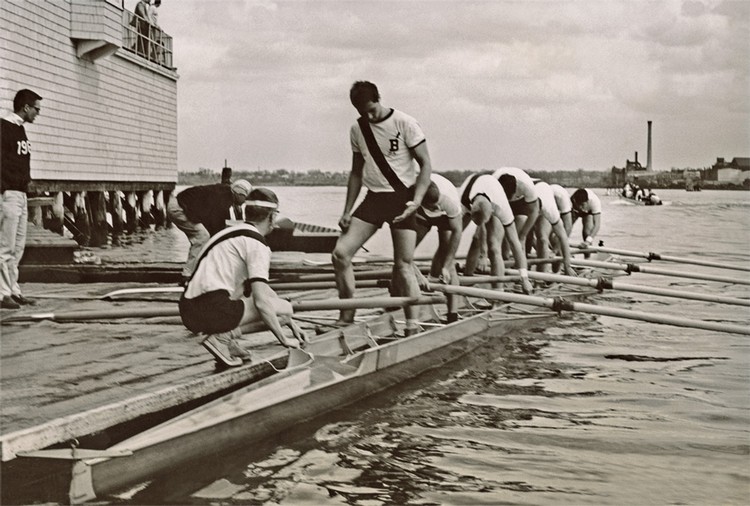 Ed Ashley: "...I was there as the freshman boat returned having rammed the bridge...it was coming in at an angle, low in the bow, not too fast (but never underestimate the power of inertia).

"The bowman looked out of it (zonked) and clearly was heading for a collision with the dock.

"At the last minute someone yelled out, 'Grab the bow,' which I dutifully did. My left hand was promptly impaled between the bow and the artillery target dock with all bathed in the waters of the Seekonk.

"Luckily the boat bounced back. I retrieved my hand and stared at it. There was no blood at first, just white bone and tendon.

"The bow hit the base knuckle of my ring finger and slid past on the pinky side between the two knuckles. I am looking at the L-shaped scar on my palm right now, about three-fourths inch vertical and five-eighths inch lateral.

"Bobo was there promptly applying his Special Forces training. He put a hell of a grip on my upper arm to block blood flow having wrapped a towel around my hand.

"Someone gave us a ride up to the infirmary with Bob maintaining that death grip on the arm. I can still conjure up the feeling.

"I think Bob was more upset than I was. Of course that took me out of active rowing for a while while my hand healed, and that led to a very different workout where I was the coxswain in a boat.

"For one thing, a shell is a lot harder to steer than I had known, and you have to look and think ahead. We were coming up on the same damn bridge, at an angle, and I realized rather late in the game that we were not going to make it through unscathed if something dramatic didn't happen very quickly.

"I hollered (out of the blue) to the port side to hold water and starboard to take it up which occasioned some looks over shoulders.

"But we made it through, not with a lot to spare. I believe I was relieved of coxing duty after that, for which the boat was grateful, having viewed me as a large load."