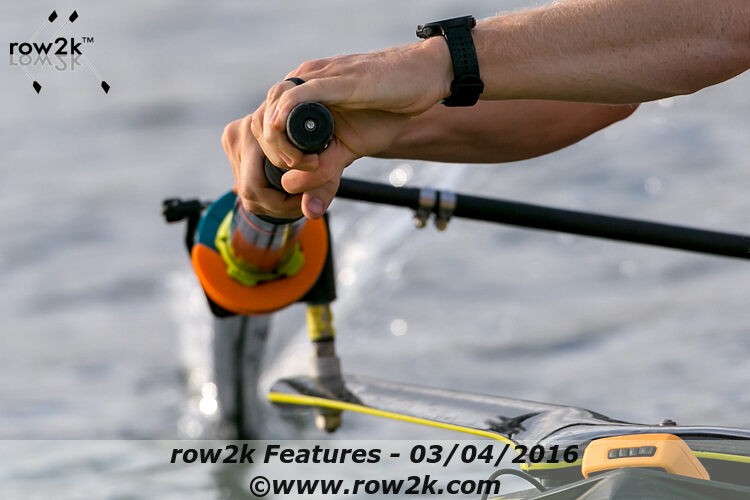 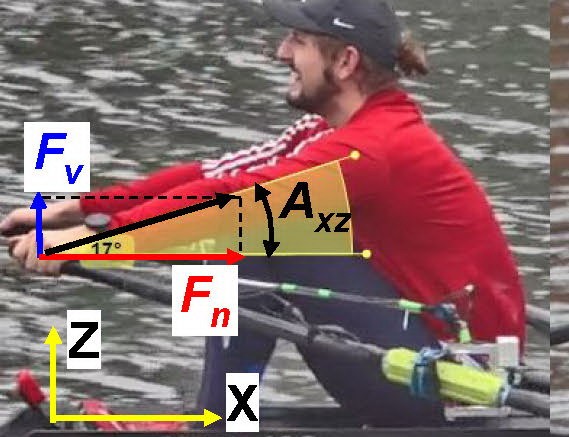 The effects of two factors will be analysed: 1) stroke rate, 2) blade type. The data was obtained using the BioRow 4D instrumented handle in a M1x doing a step-test (1min x 20, 25, 30 and 35spm) repeated with three blade types: Comps, Fat2 and Smoothies.

No significant differences in horizontal pulling angle XY were found at various stroke rates, because the axial handle force grows proportionally to the normal force. However, there was a difference between the blade types: Fat2 had a significantly sharper pulling angle than the Comps and Smoothies. Having the same inboard 88cm, span 160cm and other rigging variables (except the outboard and oar length, which was 288 for Comps and Smooth, and 282cm for Fat2), the mechanics of this difference in XY pulling angle are not yet clear. 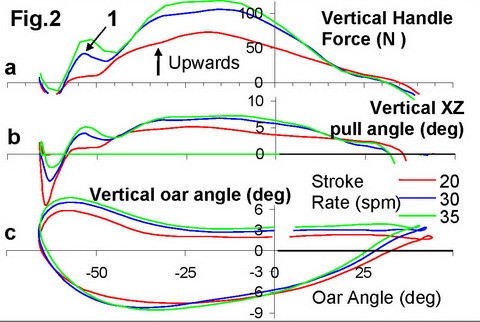 Vertical handle force (Fig.2,a) significantly increased with the stroke rate: at 35spm it increases twofold compared to 20spm. So, the vertical XZ pull angle is directed more upwards at higher rates (b), which is required to bury the blade quicker. At high stroke rates, it is important to apply a short upwards force to the handle after the catch (1) for a quick blade entry, without increasing catch slip.

Comparing the blade types, the flattest XZ pulling angles were found in the Comps (Fig.3, at 35spm), and Smoothies had the most upwards-directed pulling angles. 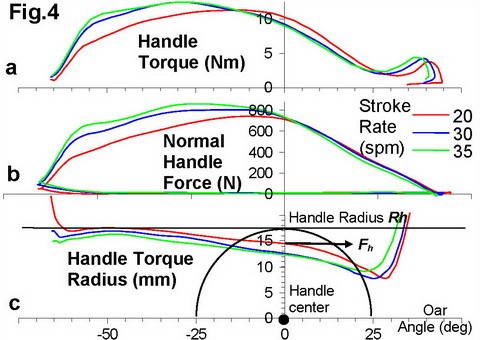 The handle torque increases with the stroke rate (Fig.4,a) proportionally with the normal handle force (b). To evaluate it, the acting radius RMh was derived as the ratio of the handle torque Mh to the force Fh:

The acting radius RMh could be interpreted as the lever length from the handle centre to the point, where the handle force Fh creates the measured torque Mh. This radius was independent of the stroke rate (Fig.4,c). After the catch, it is nearly equal to the radius of the handle Rh (this means the handle force is applied at its surface), then it slightly decreases and raises above Rh before finish to feather the blade.

However, the handle force is not applied to any single point, but transferred through the frictional forces between the rower’s hand and the handle, which works at all contact points and are directed tangentially to the handle surface. Friction is the main and the most efficient way to pull the handle because direct force application to the centre of the handle would require significant muscular contraction and energy cost. Friction helps grip in any sport: e.g., in gymnastics and weightlifting, where chalk powder is used to increase friction. In rowing, rubber grips are used. The handle torque is balanced mainly at the gate, and possibly, at the blade to prevent over-squaring.

In the Comp and Smooth blades, the handle torque was quite similar, but Fat2 showed much less torque, so the radius RMh was shorter (Fig.5). This could be related to the specifics of blade geometry and hydrodynamics, which are not yet clear.

Acknowledgements: Thanks to Dick Dreissigacker and Alex Dunne of Concept2 Inc. for their support of this study.