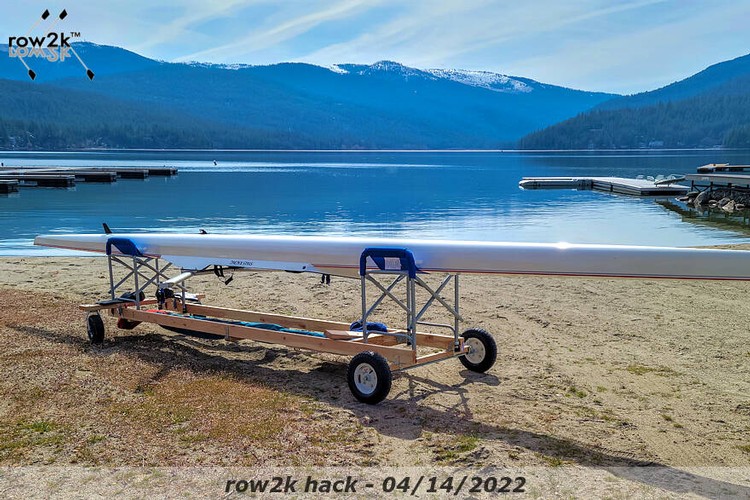 When Michael Quinn emailed us about this well-studied, slickly-engineered contraption, he admitted he was "not really sure if this is a 'hack' so much as a 'solution'"--but as big fans of over-built ways to make your rowing happen, we like this one either way.

Folks, we give you Mr. Quinn and The Boat Cart:

"We recently moved to a neighborhood with a private beach on a lake in Eastern Washington that is positively gagging to be rowed on. Our issue was how to transport a scull the 0.25 miles between our house and said beach."

"The racks at the beach are exposed to the elements and full of $50 WalMart kayaks that would get dropped on the shell by nescient philistines; not an option. Using our roof rack would be clumsy, to say nothing of DRIVING A MERE QUARTER OF A MILE to row. Strike two. Lastly, it's too far to carry the boat on your head, especially since the beach has a locked gate that requires two free hands to open."

Quinn's solution to take advantage of Liberty Lake's enticing environs? A veritable boathouse on wheels that he can easily roll from the garage to the water's edge, no car-topping--or driving--required.

"Obviously you don't want the boat to be used as part of the stabilization structure, so what you see is the Mk3 design of attaching a rigid chassis to a pair of sturdy Burnham Boat slings. It rolls easily, has space for transporting the oars and various rowing accoutrements, and weighs about 50 pounds, providing a low center of gravity to prevent possible tipping."

"The neighbors all stare as we walk down the street but that's probably just from seeing a middle-age "Dad Bod" wrapped in bright spandex; no police have been called as of this writing."

Quinn has been tweaking the design as he goes along, inspired by sculling solutions like Tom Rose's Single Sculler Elevator--and he even gave the covered-up option of the Single Storer Hack a hard look before opting for this lighter weight design. 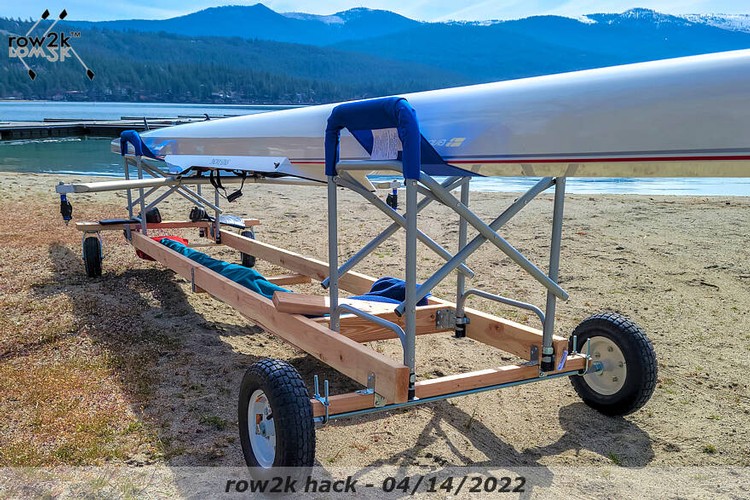 He hopes it will inspire other scullers out there looking for ways to get out on great water.

Do you have a well-built solution that helps you get your strokes in when a boathouse and a dock isn't on offer? If so, share your tips--and hacks--in the comments below.

If you have a great rowing hack to suggest for future inclusion, then please send it to us, like Mike did, and we will feature your idea in a future column.