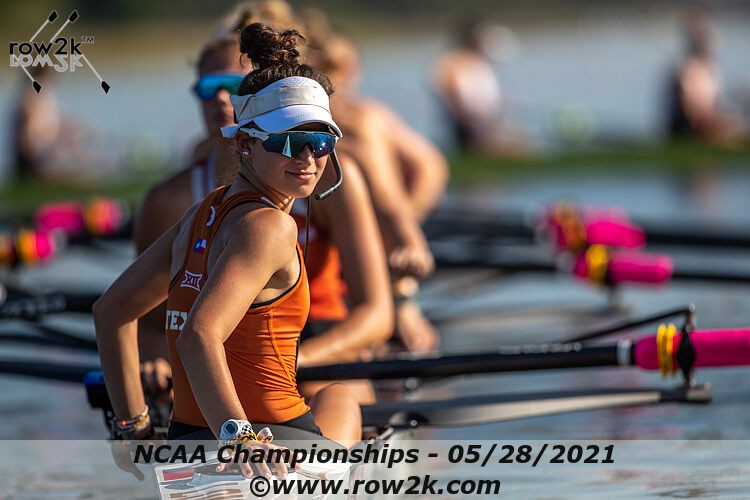 Next up In The Driver's Seat-row2k's column that sits down with the folks in our sport who keep the shells straight and add that extra something to the teamwork of a crew-is coxswain Rachel Rane.

Rachel, a Junior at Texas, coxed the Longhorns' Varsity 8 to victory as a sophomore at the 2021 NCAAs. Taking the race ahead of Stanford and Washington, she and her crew provided the tie-breaker in the points total which won Texas its first-ever NCAA Rowing Championship.

Rachel is also one of three coxswains in her family to come out of the New Trier High School program: older sister Eden coxed the Wisconsin Light Women, while twin brother Jonah coxes the Badger Men. Watching her sister race for a national championship inspired Rachel to get started in the sport, and now she has a title of her own.

Let's take a ride with Rachel, In The Driver's Seat:

row2k - What are your Top 3 most important things to being a successful coxswain?
Rachel Rane - The thing about coxing is there's never really an "A-HA" moment where everything comes together and you instantly know everything and what to say do, etc. It's constantly working at the skill and putting yourself in tough learning situations. My coach told me and the other coxswains during winter camp my freshman year: "You have to be three things in order to be a true Texas coxswain: Be prepared, be present, and be in charge". I thought to myself that if I can do these three simple tasks: be a strong leader, be trustworthy, be intuitive, then I could be successful, as a coxswain and in life. That's the great part about rowing; it translates a lot to everyday life outside of the sport.

row2k - What is your favorite drill to run with your crews? Any tips on how to do the drill well, for maximum effectiveness?
Rachel Rane - At Texas, the coxswains usually don't run the drills. Our job during drilling is to have them focus on the rowing and steer straight. In other terms, that pretty much means we are quiet. However, if we do say something, it needs to emphasize the drill and not disrupt the rowing. At the end of practice, sometimes our coach will send us single file 1500 meters and ask us to throw in specific drills. My personal favorite would be square rowing. For this one, it's all about them putting firm pressure on the blade face to send the boat and then staying together out of the back end. I just keep them relaxed and emphasize those points. Once it's really good, how can we capitalize/maximize more?

row2k - What's some of the best coaching advice you've received about your coxing?
Rachel Rane - My coach said to me "Be Rachel Rane". While it sounds simple, this was said to me my Freshman year when I was struggling with my tone and confidence. I thought that, at the D1 level, I couldn't bring my personality out on the water because it can be distracting. It's true, it can be, but being serious and having no variation with your voice can be distracting, too. After he said that, it was learning how to harness my personality into coxing and trusting that I know how to bring a boat together. 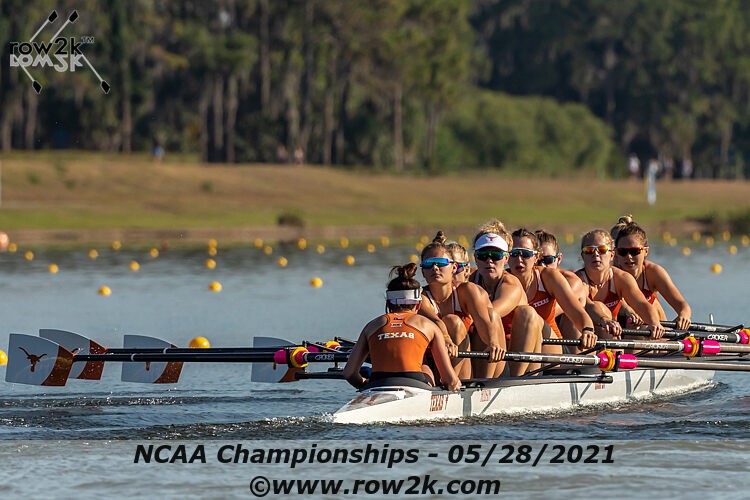 I think another important piece of advice is that I learned last year was that "Information is motivation". It's not always going to be a situation where you need to make this grand call for the boat to move faster. Use the information that you already have: where are we? relative to other boats? how fast are we going? Especially when it come to NCAAs, everyone is at the same level, so you have to be efficient and effective with what you're saying to get that extra edge.

row2k - What is a mid-race call or move that you've made that you'll remember for the rest of your life? What did it involve and how did you call it?
Rachel Rane - I would say my NCAA grand final race this past year was a memorable one. After being with the boat for weeks, I knew the ticks of each rower. What they like, what they don't like, but more importantly what they need to hear. Even at the start of NCAAs, I knew exactly what needed to be done each race and at each point during the race. It comes down to preparation as a coxswain: how well do you know your crew and how can you execute the race plan while dealing with changes throughout the race.

There were lots of things I said that I believe contributed to the speed of the boat that race. One call that stands out to me as I re-listen was at the 1000: we like to say "Here comes Texas!" After I called for the second half, I knew we were in a great position to win, so I just said something along the lines of "Let's win this thing" --we can do this. The power and confidence behind what I said shifted our momentum to attack mode. My stroke let out a big "Yeahhhh" and there was nothing that was going to stop us. Everyone bought into that belief and that's sometimes all you need. 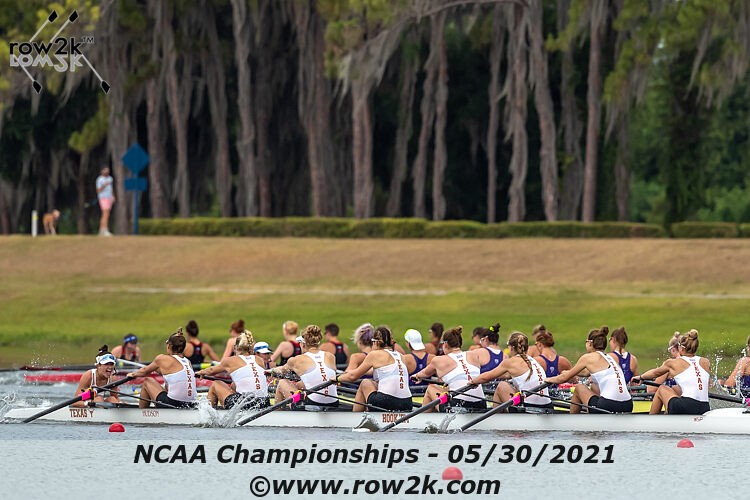 "Here comes Texas" in the A Final

row2k - What are your Top 3 "Ready for Race Day" essentials?
Rachel Rane - I always make a race plan. This is not a night before deal. I like to make my race plan about 4 days before we travel. No matter the amount of times I've done this, I have to be prepared. Making a race plan not only allows me to solidify what I already know needs to happen, but it allows me to visualize what's going to happen. There's always certain instances where a race doesn't go accordingly to plan, which is why as a coxswain it's important to be prepared with that information for all sorts of scenarios, so that you can find a way to get back on track.

As a coxswain, you always feel the need to take care of your rowers, and make sure everything is in order. While this is a part of our job's responsibility, we sometimes forget to take care of ourselves. It's super important to make sure you're getting enough fuel and hydration. Sometimes pre race nerves or responsibilities get in the way of my appetite, but in order for me to be race day ready, I have to get something in me. I found that I can drink some electrolytes like pedialyte sport or liquid IV, eat a banana, a gogo squeeze and a packet of gushers. It's the weirdest combinations of food, but it keeps me going and doesn't upset my stomach.

Third, it's all about a routine for me. I wouldn't say I'm superstitious, but I am very consistent when it comes to racing. I always pack my bag the night before, I charge all of my equipment (Cox Box, Speed Coach), and I lay out my uni, visor, sunglasses, and any layers I plan on wearing the next morning. If I do this before I go to bed, it makes my other tasks seem less crowded. Once I get to the course, I get my gear in my box and put it next to the boat. However long I have before we meet as a boat, I usually pace around and run through my race plan and get hyped. Man, I love competing. Just answering these questions are making me excited for racing.

row2k - Can you tell us a bit about how you learned how to call a sprint?
Rachel Rane - There was no "A-HA" moment where I learned to call a sprint. I grew up in a very athletic household. With that comes a lot of competitiveness within the family. My dad always told me that no matter what I do, to always finish strong and to leave everything out there. The sprint is just like that. It's the last part of the race to just turn it loose and go for everything. I'm guessing I figured out the technical side of calling it over time with a lot of experience being in different situations. Whether that be on actual race day or during practice, it sort of came natural to me. You have to know your crew and know the situation when calling a sprint. Do you need to call it early? Do you need another shift? Can the sprint just be power and not rate this race/piece? It's reading the situation well and making a quick and right decision.

row2k - Best race/practice you've ever had?
Rachel Rane - My best race was the NCAA grand final in 2021. It was a culmination of the race plan being executed perfectly and pure determination by all 9 of us. There was an unspoken agreement that we were going to do whatever it took to get across first. Honestly, the best part about it was after we pulled into the med dock and Coach Dave told us that we secured the team title, too. 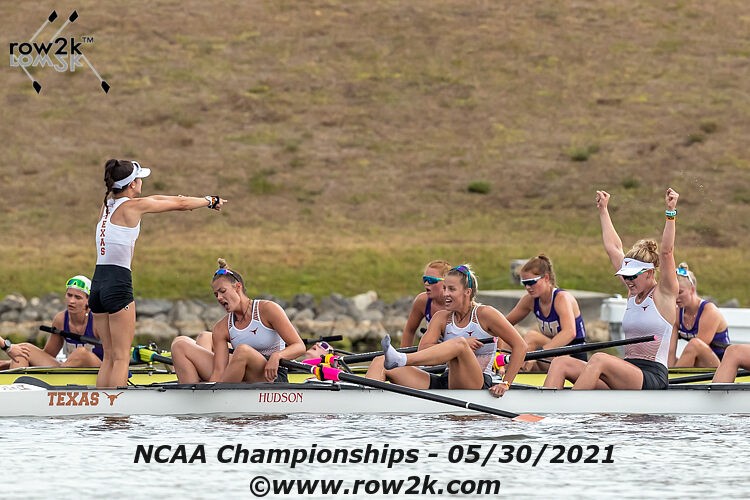 A best practice is hard to gauge. We train for 277 days out of the year; that's a lot of practices. So my best/favorite practices were probably the week leading up to NCAAs. They were a mix of different volumes and intensities. Even with the variety, you could see and feel everything was really coming together. Our chemistry was unreal and we were just excited to put it in play in Sarasota.

row2k - Worst race/practice you've ever had?
Rachel Rane - This is a hard question to answer, because I believe that whether I had a good practice or race is not just about my individual performance as a coxswain. I believe that it is dependent on the boat's effort. We're one unit. We win as a boat and lose as a boat, regardless if I called it well or not. Effort is the only thing we can really control. If the rowers are buying into what I'm saying, responding, and fully committing to that, then I know I'm doing my job and it's good. If you cross the line or finish practice with more in the tank and things you wish you could've done/said, then I would say that is a bad practice/race for the collective. It's about leaving everything on the water and asking for the most out your crew. 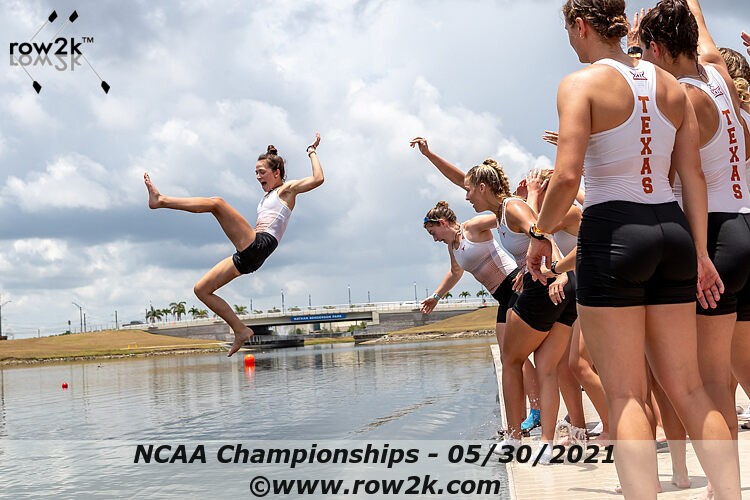 Keeping Your Boat on its A-game between Moves

Coxswain Calls: What Your Engine Room Wants to Hear