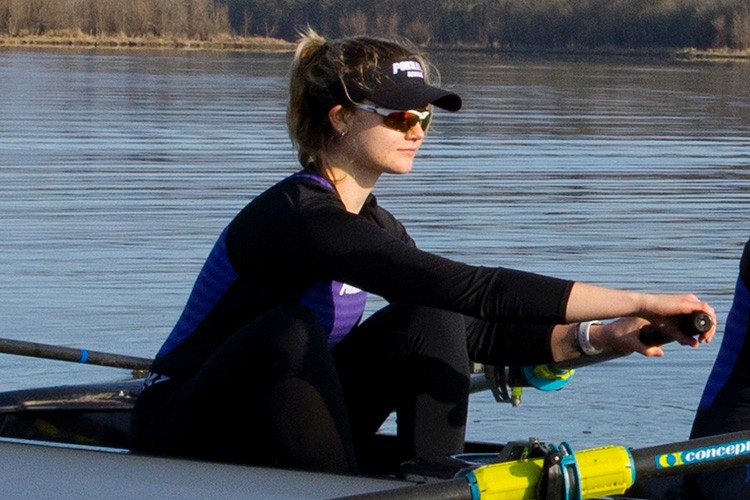 This week's row2k Interview is with University of Portland senior Maddie Olson. We chat with Olson on finding the sport, the role of being team captain, and more.

row2k - You started rowing as a novice at UP, what was your athletic background prior to enrolling and how did you end up in Portland?
Maddie Olson - I was born and raised in Spokane, Washington; I even lived in the same room all 18 years. So, when it came to college, I knew I wanted to leave and see some different corners of the world. Portland had everything I wanted to be a part of: an incredible food scene, every type of outdoor activity you could think of, people that embrace the “Keep Portland Weird” slogan, and an incredible university and nursing program. In terms of athletic background, I have tried my hand at a range of sports in my life: I did ballet for 12 years, soccer from when I was 6 until my senior year of high school, basketball on and off throughout my life, and really dove into a handful of outdoor sports like snowboarding, backpacking, and rock climbing during my teens. However, despite trying a wide number of sports, I realized that I was only ever “okay”; I was never the best and no sport really clicked for me - until I found rowing.

row2k - How did you find your way into the rowing program?
Maddie Olson - I knew I had the height, strength, and competitiveness to be a rower, or at least that’s what every family member and parent would tell me after they finished reading Boys in the Boat. It was somewhat on my radar but never something that I thought I could do at a Division I level. Once I arrived at UP I got an email from novice coach Melissa Gomez calling for freshman women to come try out for the team and I thought it could be a fun way funnel my competitive spirit into something new and exciting. After the first month, I started to realize what a difficult position I was in because, despite how much I wanted to quit the early mornings and inability to walk upstairs without excruciating soreness, I was actually kind of good (and honestly too scared to quit). I remember the first practice back after winter break, I got my first taste of what rowing really was when we were doing 500-meter relays with the Varsity team. Girls were screaming on all sides of me to pull harder when suddenly a junior next to me threw up off the side of the erg and proceeded to finish her piece faster than me. Love-at-first-erg-vomit is a little dramatic, but that day solidified that this sport and this team was the one for me.

row2k - How well did you and your team cope with the COVID-19 issues over the past two years?
Maddie Olson - Covid-19 was a curse and a blessing to our team. We lost the spring season putting an end to the countless hours we had put in on and off the water during the months before, followed by the team not having a single practice together between March and October due to coaching changes and strict practice regulations. It was really hard on team morale and team connection. During those months we all got a taste of what it was like to be a normal student, a thing most student athletes think about at least once in their career, and quickly realized how much we missed the early morning practices. Through these difficulties, UP Rowing completely changed into the fierce team we are today. With our new coach, Gulliver Scott, who recognized our potential and had a plan for how to “fill our buckets”, we embraced and conquered the challenge that was thrown at the world. With his leadership, and those on the team that stepped up to fill the shoes of the women before us, we got back on track and are now striving to be the fastest team in UP history.

row2k - You are a captain as a senior this year, how do you view that role within your team?
Maddie Olson - As my coach always says, “everything in rowing is a dichotomy”. The slow, steady recovery paired with the fast, aggressive drive, the attempt to perfect individual technique in order to flow perfectly with 7 other teammates, working as hard as possible while making it seem effortless. There is no other sport that comes closer to the black, white, and grey of life like rowing. This is magnified in the position of captain as you have to balance the selfishness of competition and wanting to be the best with the responsibility to put the team's needs before your own. The only people that can master this sport are the ones that learn to find balance in all parts of the sport and life; the only captains that can lead a team to victory are the ones that can do this and teach others how to master it as well. It’s hard and I work at it every day but it is a role I never take lightly or take for granted.

row2k - What do you like most about the sport of rowing?
Maddie Olson - Rowing takes a lot of things from you: your free time, the luxury of staying up late, uncalloused hands, and a back without chronic pain. But for everything you put into the sport, you get 10x back. It has given me a family of 30+ incredibly powerful, smart, mentally strong, and competitive women that do more things before 9 am than most people wish to accomplish in their regular day. I found my people that love me, not based on the many social norms enforced on young adult women, but based on how hard I pull for the teammate sitting in the boat with me. This is unique, not only to the sport of rowing, but to UP Rowing – rarely do you see a rowing team where every girl is 100% dedicated to pulling for one another. Rowing has changed my life, and being apart of this team has been the best thing to even happen to me.

row2k - What has been your most memorable race and why?
Maddie Olson - In the fall of my sophomore year, my dad got in a really bad bike crash the Monday before our biggest 5k race: Head of the Lake. I flew home to see him and after a few days he had turned the corner towards a full recovery. Because of this, we decided I should be there to race with my team. I flew into Seattle the day before the race, got in a quick practice, and we were ready to smash it on the racecourse that Sunday. Going through the Montlake Cut is my favorite part of the course there because it is the closest venue that rowers get to a stadium atmosphere, with thousands of spectators screaming at you. One of the things our team does during races is calling power 10’s for each person in the boat and when we were coming through the end of the Montlake Cut, where my dad would have been watching me that weekend, my coxswain decided to call a power 10 for my dad. Those 10 strokes were when we hit the lowest split of the race.

row2k - What are you studying at Portland and do you have any plans for after graduation?
Maddie Olson - Currently I’m a senior in Nursing at the University of Portland. I hope to eventually become an ICU, ER, or Life Flight nurse and go to Medical or Nurse Practitioner school at some point in the future. For now, following graduation this spring, I’m planning on rowing a 5th year with my team while getting my MBA in non-profit and healthcare management. This summer I have the goal of doing a triathlon with my dad, traveling, and spending as much time as possible with my friends and family.