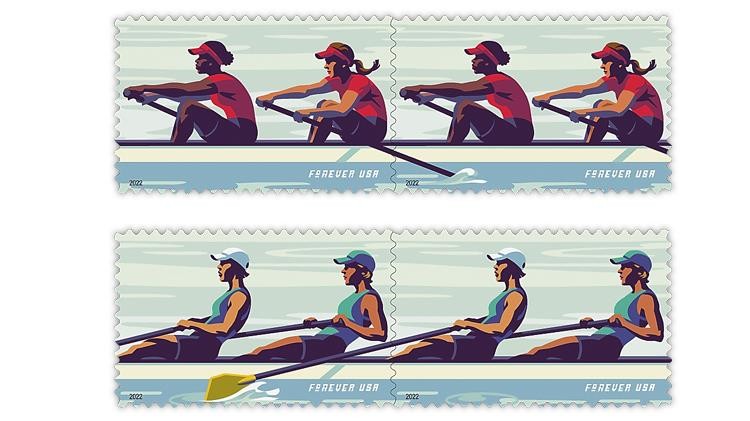 Rowing in Color host Denise Aquino sat down with Nancy Stahl, the illustrator behind the Women's Rowing postage stamp, which is coming to post offices on May 13.

Stahl is a longtime illustrator whose work has included numerous USPS stamps Learn about the idea behind the illustration in their conversation below.

Denise Aquino: Nancy Stahl, thanks for joining me today.

Nancy Stahl: Thank you for asking me.

Aquino: Of course. The illustration of "Women's Rowing" on the postage stamp definitely caught my eye. Around this time last week, I was waiting in line at the post office, I didn't have any coffee yet, but once I saw that stamp -- and that illustration -- my day was already 100x better. So I'm incredibly happy to be talking to the illustrator behind it.

Stahl: I'm glad you saw it. I haven't seen it yet.

Aquino: Well, you know, for those of us in the rowing world, we have that spidey sense, and we catch that sort of stuff. But enough of me talking -- tell our rowing community who you are.

Stahl: I'm an illustrator; I've been an illustrator for more than 50 years. I started out doing illustrations for magazines and newspapers, advertising. And in the ‘80s, CD covers; all that sort of stuff. Things change. As time has gone on, I appreciate a longer deadline. I can't work overnight anymore. So I've sort of evolved into working for clients who have longer deadlines, and the Postal Service is one of those clients.

Aquino: Wow. That's good to know. So if the Postal Service has any other long deadlines and other ways to incorporate rowing, we know (laughs). For those who aren't familiar with the image from the Postal Service, which is coming out in stamp form on May 13 2022, it is an image of two women rowing. The Black rower was rowing port side and then the white appearing rower was rowing starboard side. You're the artist -- did I describe that correctly?

Stahl: The sheet of stamps actually includes two repeated stamps of two rowers each. And in the selvedge (the area outside of the actual stamps) there is a coxswain for each crew and indications of being on a river.

In the stamp you are referencing, I'm just thinking, the Black woman was in front of the other woman. And so she's on the left. So she is "port side". I don't know all the lingo. You know, I read up on rowing, and I have rowed. But I feel lost if it gets beyond the basics - so you tell me!

Aquino: I mean, that feeling of being lost in the lingo did NOT translate in the illustration. On the contrary, I think a lot of folks felt found and seen. It captured a lot of folks' attention. On our Instagram it got almost 2000 likes.

Stahl: Wow, that’s great! I’m thrilled that people are excited. My hope is that it brings more people into the community, into the sport.

Aquino: It was also featured on row2k's Instagram highlights of the week, and the more eyes the better. What inspired you to create a multiracial representation of a mostly racially homogenous sport?

Stahl: I wasn't really focused on the fact that rowing is homogenous. I mean, I know it traditionally has been. But I was going for diversification mostly because it's a postage stamp. And it’s important that the scope of our country is represented on our stamps. It takes years for stamps to be issued so it’s possible that the Postal Service mentioned that too, I don’t recall. But diversity is something I aim for whenever I'm doing a job for a client that isn’t something like a portrait.

Aquino: It's great to hear that the intention was there, and you were able to bridge the gap between intention and impact. So many people are going to see that stamp, which is so awesome.

Stahl: Yeah, I'm glad you noticed. I hope you won’t be disappointed once you see the entire sheet. The thing is, you look at these images on a poster and they're exciting, all blown up. And then you see it stamp size. And it's sort of, "...is that it? Is that all?” I hope you’ll still enjoy the stamps at a real size.

Aquino: Well, I love sending letters still. I'm so excited to get sheets of the stamp to mail. Some people said, "oh, I don't even write letters, but I'm going to get it and just hand them out." That's not how stamps work, but sure!

Stahl: Actually the postal service is happy to have you buy stamps but not use them! Stamp collecting! (laughs)

Aquino: You've inspired a lot of young illustrators, especially young illustrators of color with a rowing background, to increase just rowing visibility and rowing art visibility, especially rowers that look like them. And you said one thing that caught my attention in our email exchange, before this conversation. You said, "If they are not part of the group, then I feel it is even more important that they be added to my images." Given that, what advice would you give to any artists, especially young artists of any racial background, who want to increase visibility within a given space?

Stahl: The fact that something hasn’t been represented before shouldn’t scare anyone off. Being the first to depict something is no reason to not do it. Actually, it’s a reason to do it. It opens things up and the more it is seen, the more others become familiar with something they may not have imagined. That can only help in taking down any barriers.

Aquino: I think that's a great message for the rowing community to hear. It's great to open up and show the possibility of what change could look like, especially a vision depicted on a government issued item.

Aquino: For mailing! (laughs) Nancy, thank you so much. Is there anything else you'd like the rowing community to hear?

Stahl: Just that I think it's a lovely sport. I wish I had someplace nearby where I could row.

Rowing in Color is a podcast that amplifies the voices of color in rowing. To learn more visit www.rowingincolor.com or visit them Instagram at @rowingincolor