We did so, having done that many times before.

Because I was still close to my experience in seeing a Harvard-Yale race (the only one I ever did see actually), and Jim Rathschmidt was still the Yale coach, I was especially interested in reading the newspapers the week before our scheduled race with Boston University on the Seekonk.

Jamie Koven, much later than us and one of the most successful oarsmen ever to row at Brown, urged his teammates involved in compiling a 652-page book EVER TRUE: THE HISTORY OF BROWN CREW not to write so much about this subject of understroking and overstroking and dwell instead on things that went wrong.

I entirely sympathize with this viewpoint. Rowing is regularity. The winking blades that Quentin Compson notices on the Charles don't just signify eternity but are ticks of a clock. An interruption of regularity (the bumble-bee that flies into a classroom) is more than ordinarily interesting.

But Yale, coached by Jim Rathschmidt, understroked the opposition in 1956 Melbourne, the last time a U.S. college crew would win gold-- and his understroking method was instructive.

You row more slowly than the other guys but with greater efficiency. They build up more lactic acid and fade toward the end of the race, but you don't.

They tried to understroke us but it didn't work. We were in too good shape from the Marine training Whitey inflicted on us. All the hyperventilated racing starts we did helped too. As did, at the end of every on-water practice, our astronomically fast sprint to the barn.

How high could Bill Engeman drive the stroke our sophomore year with all different heights and weight of guys throughout the boat? Forty-five, forty-six strokes per minute?-- I don't know. High.

You gain or lose a shirt in a one-on-one crew race. And the well-made red shirt I acquired that day remained my favorite until a few decades later when it finally wore out. The BU four-man who handed or rather spat it at me was six feet six inches and weighed more than me by thirty pounds of muscle.

He rubbed the shirt in tar from the blacktop next to the NBC before he gave it to me.

There is nothing like poor sportsmanship from the other side to help one savor a win. 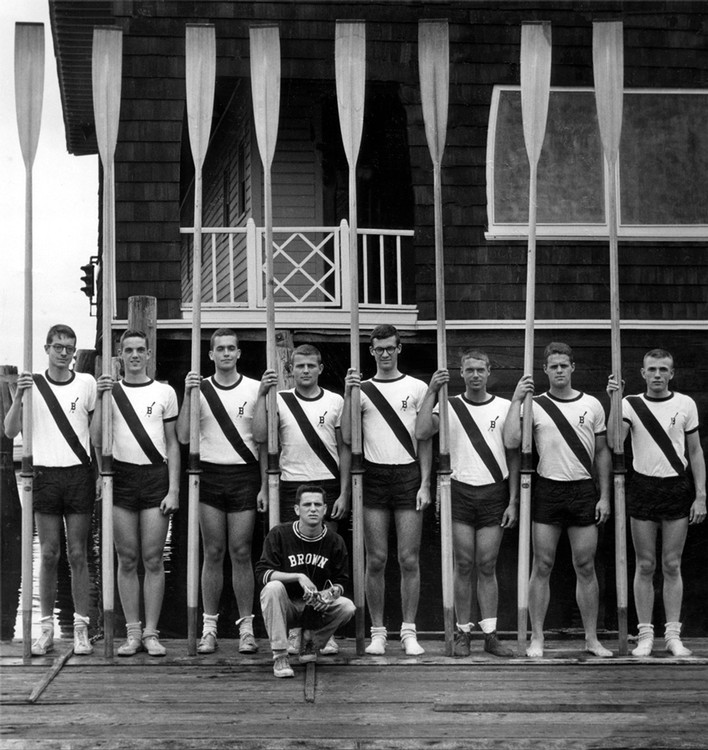 This was the second truly exhilarating race we won. Man for man we were not big. To continue the good work, we would need to tell ourselves the untrue fable of the kamikaze crew from Japan that rowed a whole race at sixty strokes per minute and all eight died of heart attacks right after they crossed the finish line.

Both BU and Dartmouth, whom we were scheduled to meet the following week, had won the huge Dad Vail. That was how they became big league crews. And we, though a lowly Dad Vail crew, had beaten BU so naturally we hoped to beat Dartmouth too.

Not to be. Dartmouth like BU were bigger than us, but this time there was a thirty-mile per hour headwind blowing north toward the Blackstone River.

Ordinarily from direct experience in the Providence waters we were good at handling waves, but that day I can only speak for myself. Somewhere there is a photo of us losing, not by much but losing, and I hope Phil can't find it for I look like a loose tooth, lost, with no connection to the other people in the boat.

What a year though! There was the early season experiment where we tried to row as slowly as we could, got down to eight strokes per minute and actually kept the boat set up (level). As you row slower and slower your technical mistakes magnify. A good chance therefore to correct them.

The Dad Vail was imminent. Harder and harder we trained every day.

In view of our impecunity, however, transporting our sixty-five-foot Pocock cedar speeder The Stein seemed insurmountable, as did the sudden foot infection incurred by our 3, an uncommunicative one hundred and ninety pounder who disappeared one day without saying goodbye.Â Some say he stepped on a nail but I have always thought he was a victim of the porcupine doing her routine thing.