Bill just wanted to keep his Staempfli in Providence and row it on the Seekonk.

Since nicknames in crew are important from Homer and Vergil on down, I used to call Bill "Fedallah" after the smoothest oarsman in all of Herman Melville, the ringer with dusky whaleboat crew that Captain Ahab would only bring up from the Pequod's black hold on special occasions.

But I was an American Lit major so what can you expect. I also was publicity chairman of the Brown Rowing Association.

The appearance of Jim Fullerton wearing stout shoes on the porcupine dock changed the fate of us all. Here was a man very used to working with boys and young men, and he immediately put us at ease.

All three boats successfully launched. I was at 4 in the third boat, 4 being the most nondescript seat in any eight-oared shell (will explain later). 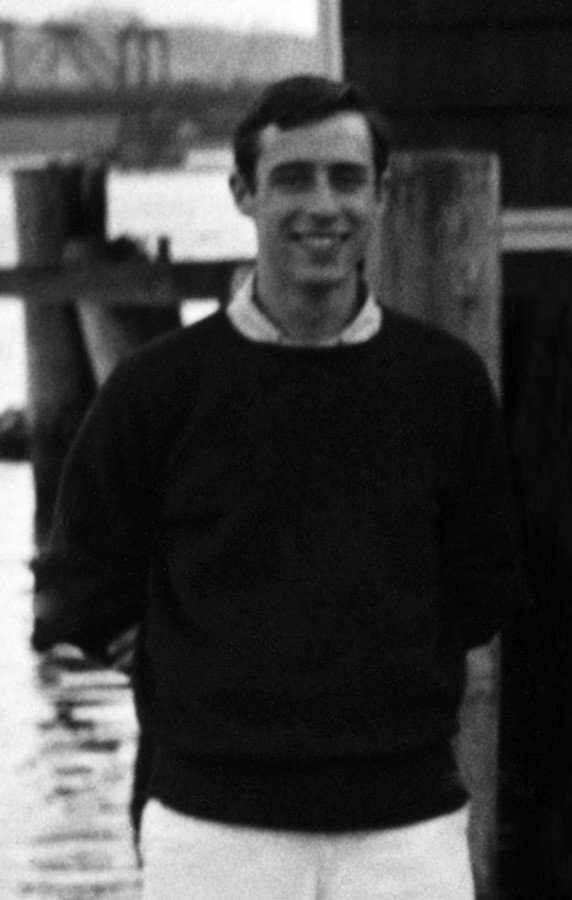 Coach Fullerton climbed into our one and only motorboat, which was on loan. Wisely, he picked a special person to man the handle of the outboard motor, John Tasker, whom Bill Engeman would quickly re-name John Taskforce, our charming manager for the next four years.

From out on the water Jim Fullerton gave the lookover to all three boats. The next day he decided to run a time trial over full Henley distance of one mile and five sixteenths at whatever rate Bill Engeman at stroke seat in the first boat could come up with. But he needed another tall person for the middle and looked at me. Thus I became 4 in the first boat.

Somewhere also in the middle, not yet gravitated to more difficult 7, was a stocky fellow named Marshall Bassick whom Engeman renamed Marshmallow Basketball. Again the new name given by Engeman stuck. Engeman must have been having fun even though interest had already dwindled down to two boats. 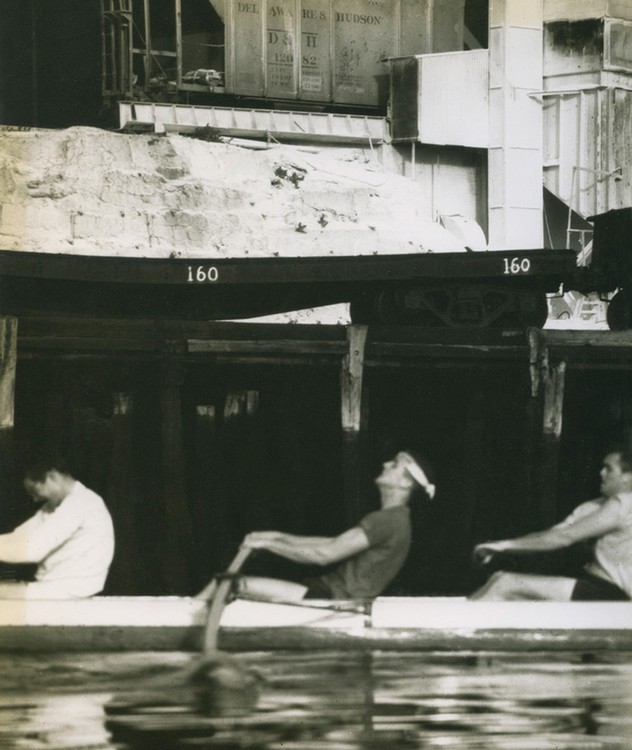 Looking back, Jim Fullerton's idea to run a time trial so soon was a coach's decision worthy of Pat Summitt or Geno Auriemma and the only thing that would have worked.

On the other hand a time trial on the third day was crazy as can be. Crew coaches must think about safety. When I coached at West Virginia University and Skidmore College, two places where the water often was melted ice, Charlie Butt advised that I always carry a bunch of tall garbage bags in the bow of my motorboat.

If someone fell in I was to immediately bundle that person in a bag and tie the strings not too tightly around his/her neck to preserve enough body heat to keep the person alive.

One had to plan for disaster. And water was flying through the air in all directions. Five persons in our boat had rowed for only three days. But everyone was near a person who knew what he was doing.

Down the course we flew at 34 strokes per minute.

Amazingly, no one caught a crab and was flung by oar handle against his belly six foot sideways out of the boat.

And Bill Engeman was able to maintain the 34 despite the five novices.

I'm sure I bounced around a lot. But then it was over and I was more than alive having experienced a Nantucket sleigh ride. Talk about being hooked. I was harpooned.

And Jim Fullerton, it turned out, was not shy about seeking tough competition.

We had no way of transporting shells, but MIT said they would lend us some. And those MIT shells were light and fast with the little wheels under the sliding seats well lubricated. I can't remember such generosity happening anywhere else, although we ourselves once leant Amherst College our best boat after the bow of their own boat, while being transported, hit a telephone pole in Philadelphia and broke off.

It was late Autumn close to the end of Fall season. All the crews did a mile and three-quarter piece with MIT up north on the Charles.

I remember standing on the river bank next to Coach Fullerton and watching the varsities approach with a strong tailwind behind them. MIT were engineers with big T's on their backs rowing in perfect unison with a half-mile lead. But they were doing something different and special-- what? They were rolling up over their thighs almost as if they were rowing on the square-- in order to use the eight blades as sails between strokes. Coach Fullerton and I both were very impressed.

Then it was our turn. We rowed well and stayed with the MIT first freshmen the whole mile and three-quarters but lost by a deck.

Back in Providence we finally did a race with the varsity. They were rowing the fast shell, the Stein, but we beat them by two lengths.

The next day none of them showed up for practice. The Stein was ours. 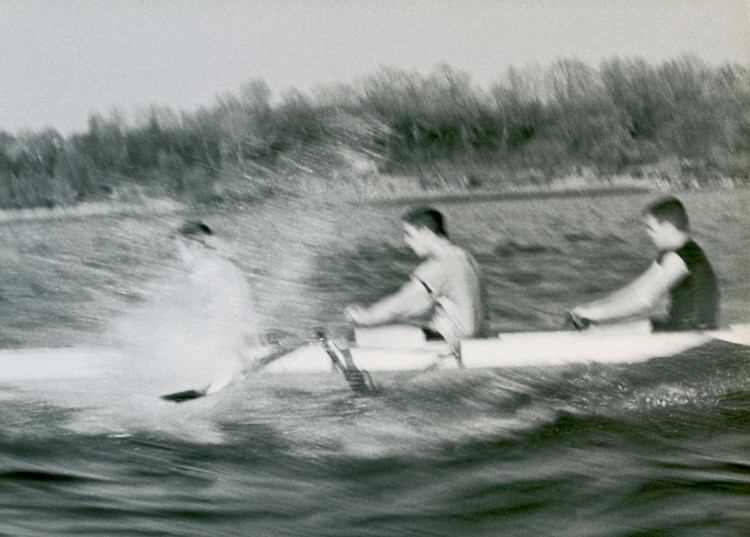