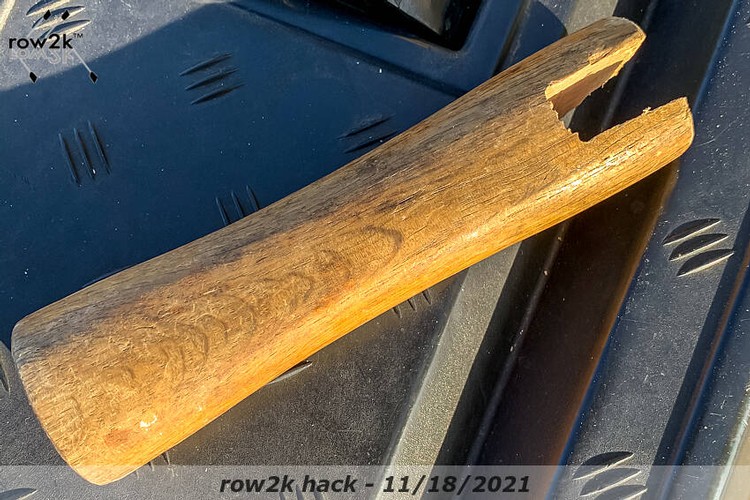 This week's hack is another take on the one tool every boathouse needs that pretty much has to be hacked into being: The Wing Nut Tool.

We've seen these made from PVC pipe, from old, unusable backstays, even a re-purposed hockey stick (which we showcased here a few years back), but really any hand-sized tube or block of wood with a wing-nut grabbing notch in it will do the trick. What sets this version of this tool apart is that it is already ergonomically shaped, because this guy made it out of the handle of an old hammer.

That's right: it is a Wing Nut Handle-er, and you can easily make your own.

You will need a hammer you are not terribly attached to, of course, but the plus side of using a length of wood that is already sanded and smoothed for use as a handle is that you only need to worry about notching it for its new purpose--and the fact that it is wooden and not, say, a metal backstay remnant is that your new tool will float...which is a nice feature of anything that might get passed back and forth in a rowing shell.

Once you have cut-off the length of hammer handle you want, leaving about an inch at the top to fashion into the working end, all you need to do is cut a notch about a half-inch deep that the wing-nuts can slide into. A band-saw does that job the best, but any number of saws will do the trick and you could even get by with a hand-saw, if you are patient, or just remove the excess material with a drill.

With that notch cut, you are good to go for most loosening jobs, where the bolt is not much longer than the wing-nut. To loosen wing-nuts on longer bolts, it is easy enough to drill a 1/2 bore hole that is two to three inches deep down the center of your new tool. Since you do sometimes find longer bolts down between the feet on some foot stretchers, this is a worthwhile add.

Let's face it, for folks doing a sport that is full of wing nuts--on nearly every foot-plate at a minimum and, at some places, in place of top nuts--rowers often find themselves in need to a wing-nut tool, and this is a simple way to hack up a solution that works a lot better than trying to grab the wing-nut with an adjustable wrench or the open end of a 7/16 wrench.

Ironically, of course, wing-nuts are, by design, supposed to be a tool-free fastening option...but the inventor of the wing-nut obviously never met any rowers, who can over-tighten a wing-nut like nobody else, almost as if their life--and their next race--depended on it.

Have you hacked up a cool tool at your place? If so, share your tips--and hacks--in the comments below.