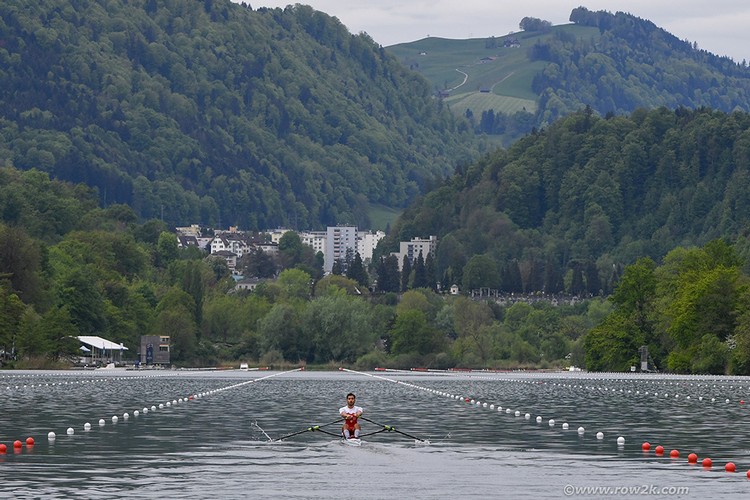 One critical element to racing that we failed to mention last month was steering. If you're racing side by side on a buoyed course in your own lane, you need to be able to go straight. In a head race, if you veer a little off course, it will likely only cost you time but in a sprint race, if you veer off, you could easily find yourself in the buoy line or worse, in another lane, where you could be disqualified. At Calm Waters, we don't talk much initially about how to turn the boat while rowing because we want people to first focus on going straight.

Most beginner single scullers don't go straight. The timing and/or balance are off. To work on timing and balance, I encourage single scullers to allow their blades to skim lightly on the water throughout the recovery. This helps ingrain the muscle memory of hands staying level. (Then later, the focus remains on the hands going straight away but now one inch lower.) Plus, with the blades on the water, the rower never loses sight of where the blade is relative to the water which generally makes for better catches. Finish timing is at least easier to observe; one can watch the blades at the release to see if they're coming out cleanly and together.

Because sculling boats are rigged left over right, we've found most sit to port with the right hand being too low and/or the left hand being too high. If you find the port oar getting stuck at the finish, that can easily cause the boat to pull to port. Just like in sweep rowing, if the boat is down to port, ports need to raise their hands. That often seems counter-intuitive in the single but the same rule applies.

If you're not sure where the correct height is, sit at the finish and balance the boat with the blades squared and 3/4 buried: that's the height you'll want your hands to come in at the release. Be sure to allow the top edge of the blade to come out of the water before feathering. This will help keep the blade from getting stuck.

As single scullers gain more experience and the timing and balance improve, the boat may still perpetually steer in one direction. Almost always I find the culprit is one side pulling a longer arc than the other side. If you're pulling longer with the port oar, the boat will steer to starboard. With most people being right dominant, I often see the right hand reaching out further than the left hand and then coming through and finishing even with or closer to the body than the starboard hand. A longer arc with one oar every stroke, even if it's only a little bit, will soon have you heading off course.

You should be able to see your hands at the catch to determine whether the hands are even or if one hand is to the stern of the other. We coach scullers to row with the left hand slightly to the stern of the right hand so that the right hand can fit neatly into the palm of the left hand at the crossover point. You can do this and still go straight as long as you make sure that your hands are always in the same relative position to one another – at the catch, the middle of the drive and at the finish so that you have the same length arc on either side. 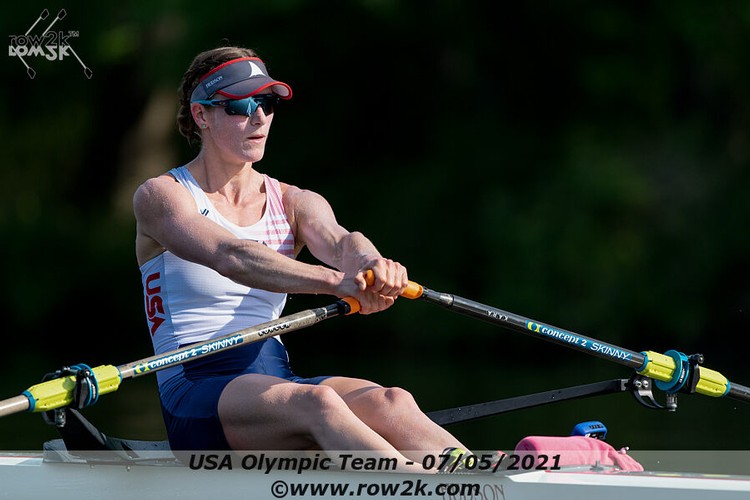 Left hand slightly to the stern of the right hand

The one aspect of sprint racing that is actually easier than head racing is that you don't have to look around. Your lane is all yours once you start the race, no need to worry about what is ahead of you. At the beginning of the race, it's easy to steer off a stern point such as the stake boat or a certain point on the starting dock.

As you get further down the course and if you have a buoy line on either side of you, use your peripheral vision to steer off the two buoy lines to keep yourself in the center of the lane. As everyone well knows, the shortest distance between two points is always a straight line.