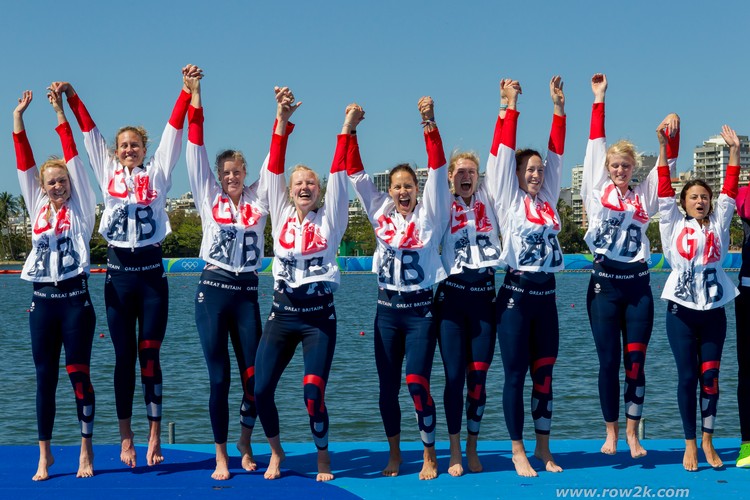 The GB's Frances Houghton is one of only two women in British rowing history to be selected for five Olympic teams. Houghton raced for Britain in the 2000,2004,2008,2012 and 2016 Olympics, capturing silver in the quad in 2004 and 2008, and silver in the eight in 2016, the first-ever Olympic medal for Britain in that event. row2k caught up with Houghton in the summer of 2021 shortly after the publication of her new book, "Learnings from Five Olympic Games."

row2k: Why this format as opposed to a memoir or an in-depth study of rowing as a sport or any other format?

Houghton: That's a great question. In my head I had a massive tome and I thought, "How am I going to get this out?" And really, this was the pre-book to that because this is the stuff that's pretty specific to rowing. I've learned so much and it's inside my head, and as someone said to me, it's too valuable not to share and too burdensome to keep carrying around. So that's why I wanted to download it.

It took me about four years, because I had all the content but I really wanted something succinct. And I think because it's really succinct it can seem super simple. But actually for each person it kind of involves a lot of unpacking to understand, "Okay, I get that now. I've just been in that situation, I'll go back and read a different perspective on it, unpack it a bit more." So that's the intention.

And initially, because I felt like so many people had helped me so much during my career, especially during those dips and getting me across the line that final time, it really was something I wanted to put together, number one, to make sure I had articulated it for myself and didn't forget it. But number two, as a 'thank you' to those that had helped me.

During my career, one of my responsibilities in the boat was to be the person that basically boiled everything down that we'd been working on into a really succinct race plan. I really had experienced the value of simplicity. And so that's why I knew that on the receiving end if someone could distill some learnings, that I could have really benefited from when I was still an athlete, that's what I wanted to produce. I knew that, as you say, lots of things have been written and there are lots and lots of words, but sometimes it's hard to put what's actually meaningful in terms of what can help me perform better. So I thought, well, I'll save the stories for another time and I'll get the lists down.

So that's why we have the kind of pragmatic stuff interspersed with the stories to illustrate it and sort of bring it more alive. When I was writing to publishers, I actually found that by the time I'd managed to articulate clearly what it was I wanted to write and the overall story of it, I was pretty much there. And I knew that it was going to be pretty specific and a publisher would probably want to make it slightly different and have a wider appeal. And so I thought, I'm going to see this through on my own. And that's why I decided to do it bit by bit independently.

So that's a long answer, but hopefully it's paints you a picture of how it ended up being what it is.

row2k: You hung on very personally to this format and this idea, and you were very specific in doing what you wanted to do. Do you think that might also serve as a metaphor for your career?

Houghton: Definitely, as a rower, I wanted to row the way that I had always dreamed of rowing and for it to feel the way I wanted it to feel. And I always felt very much this is my own journey. Obviously, there are loads of people we work together with and encounter on our own. But this is for us and myself to make the most out of it.

I think just being someone that finds it hard to digest lots and lots of words. When I was rowing we'd do the debrief and then I'd be like, "Right, so we're just doing this and this?" Because in my brain I can only hold two, maximum three things.

When I sat on the starting line of a race I would always have three things written on the back of my hand and I would not allow myself to think about anything else. Everything had to be concentrated down into those three main points. And that's what I found to be most effective in executing what you could on the day. 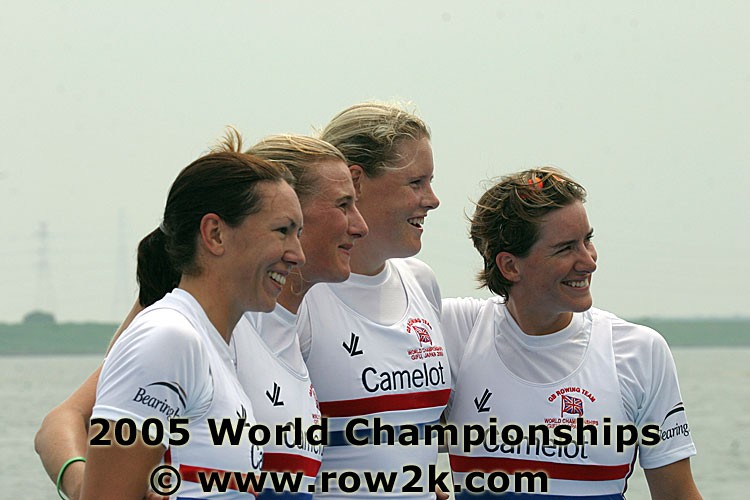 row2k: It strikes me that the book is almost like an instructor's manual format. Was that partially the intent or is that just how it came out?

Houghton: The intent was to download what I had learned, but not to say to other people, "This is how you should do it." I wanted to share this information because I think people often don't share how they've thought about something or what they've learned about nerves or whatever, because it's very private and it's very personal to each person. And most people think, "Well, I won't say that because you'll just feel differently, we're all different." But I felt that it was still valuable to people to see how someone else felt.

For me the whole thing is a conversation starter. So if someone else felt completely different, at least they're having the conversation, "God, I don't feel like that at all." And then the next sentence is, "Because I feel this..." Especially between a coach and an athlete or two coaches.

In terms of it being an explanation of my experience was, I hope, that it has value in coaches reading it to know what goes on inside an athlete's mind truthfully. And especially as an introvert, I think a few coaches have said to me, "Oh, this is pretty interesting because I have such-and-such an athlete and I just can't figure out what's going on." And I'd day, "Well, probably quite a lot." So this might help kind of open up an understanding of what goes on inside a rower's brain.

Houghton: I've rowed with plenty of extroverts. Actually I loved rowing with the extroverts because I'm not someone that brings the energy and comes in like, "Yeah, this is great!" I really needed those people around me to bring the energy on each day. 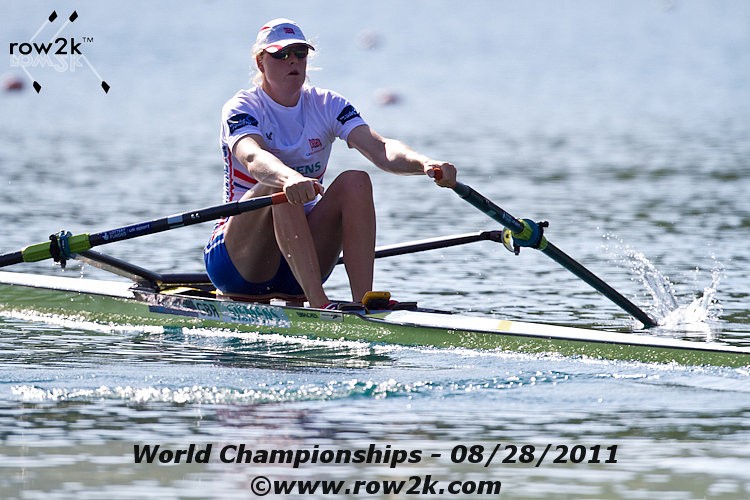 Houghton raced the W1x at Worlds in 2011

row2k: You begin the book with this very steep vow to yourself, "I am going to go to five Olympics." Could your 'learnings,' as you call them, also be applied to more modest day-to-day goals?

Houghton: I think so much of it is simply about seeing through the fog. You pitch your mark somewhere and because you've pitched it in the future somewhere, even if it's "today I'm going to do these three things," there's probably thirteen thousand things you're choosing not to do. And the fact that you do get those three things done, for me it's the power in choosing something and discarding so many other distractions.

Even if it seems modest, it's still creating clarity amongst the different options we all have every day. So for me it does, because it's not so much about the height of the goal, it was about the clarity of the goal.

And that made me able to make decisions and prioritize whatever I did. It was the point to work back from in every conversation in my head with other people. You know, someone asks you to do a meeting at three o'clock and you say, "well, I could. But actually my goal for today is do this. So the answer is no and my priority is this because this is my goal for today. So no."

Houghton: "Creating performance" came from when I changed my mindset from "I've got to win" to "What can we create together?" And then I saw every day as being about creating something within our team or group. We're creating our technical model, we're creating our race philosophy, we're creating good relationships by talking and understanding each other more as opposed to how fast we're going. So that's where that mindset came from.

It was a personal perspective, which once I had found my clarity about what I really valued it was a pretty quick switch, actually, because I realized how much more motivated I felt about creating performance as opposed to the pressure I felt about how fast I was going. And pretty quickly, once I was inhabiting that mindset, I was calmer inside myself and you could see the impact on everyone else around me. They were looser, we were having much more constructive conversations. I was putting less pressure on other people and less stressed about things. It was just a much more positive environment to be in for myself and others.

row2k: Could this approach work in a full, wider team setting with many athletes, as opposed to a single crew?

Houghton: Yes. For me the approaches work in multiple rowing teams as well as outside of rowing. I've had quite a lot of inquiries or conversations with emergency medics, for example. The human factors in their performance and how important communication, self-awareness, clarity of roles, and the review process, and all of those things are. For me, it's entirely applicable. And for me I come across it all the time in my everyday life now and I never go rowing.