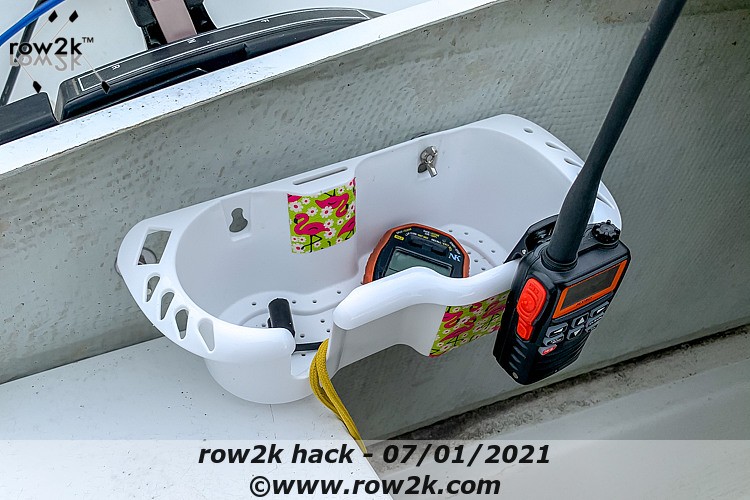 Rowing Hacks typically spend a lot of time in coaching launches, so it's not terribly surprising that you come across some good hacks when you borrow a launch. Case in point, this sweet little add-on we spotted in a clever guy's coaching ride down on the Occoquan: The Caddy Carry-all.

Let's face it, your run-of-the-mill wakeless launches are not really designed with much in mind-- besides, that is, the illusion of "wakeless-ness"--so creature comforts like cup holders, or even comfy seats, do not come standard. So, unless you are okay with your phone, radio, video camera, strokewatch, etc, sliding off the console and going plop mid-practice, you might want to head over to the bath accessories department of the local Target to get in on this Hack.

It actually took us a second, too, to figure out exactly what was in play here; grateful for a secure spot to drop our stuff, we had to pause to figure out how this perfectly sized tray came to be mounted at the perfect height, right next to the throttle. Then it hit us: this coach had taken a plastic shower caddy--or something similar--and put it to good use by bolting to the side of the cowling. He now has a spot to safely rest whatever handhelds he's toting around and, as a bonus, they are easy to pick up as soon as he takes his hand off the throttle.

Now, as hacked launches go, the tricks you use can range from the simply safe--like adding a safety card--to the full-on build out--like a Launch Box--and, no matter what you add to your ride, just know that it will be hard to top the undisputed king of tricked-out launches, but we have to give it to these smart TJ coaches here: this is a super simple upgrade that likely comes in handy during every outing, all for just a few bucks. Plus, it adds yet another department of your favorite big box store to the list of places where you can find stuff to get down to hacking with. So, caddy up, folks--all the cool launches are doing it.

Do you have another cool re-purposing hack that we could all put to good use? If so, share your tips--and hacks--in the comments below.

Got a great rowing hack to suggest for future inclusion? Send it to us!