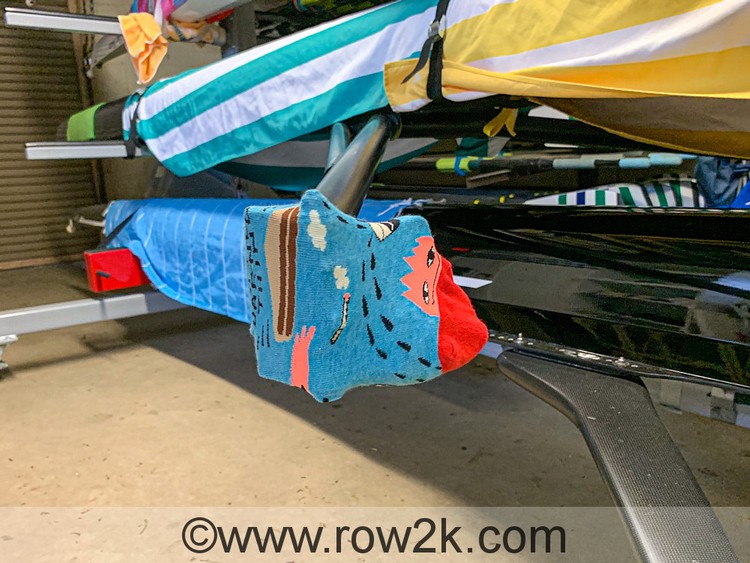 Full disclosure, when we spotted these racked singles at the Occoquan a few weeks back, we grabbed this pic of the socked oarlock to run as an update on an old Boathouse Hack, the one about the socked riggers. Now, we still think *this* sock adds a cool bit of flair to that old trick and gives us as good a excuse as any to revisit that old tip, but when we looked a bit closer at the photo, we realized there was a whole new hack laying out here in plain sight:

Using your wipe-down towels to swaddle the boat and keep it safe from the dings and scrapes inflicted by "upstairs" neighbors in the rack above? While at the same time using the boat itself to dry out the towels for next time? That, folks, is both genius and maybe laziness wrapped snugly into a one cool trick: the Swaddled Single.

Let's face it right up front here: some of the best hackers in the sport are our lone wolves: when it is your own boat and you can trick it out however you like, the noble single sculler has a lot of autonomy for hacking. Toss in a masters rower's bank account and the sort of "lots of time on my hands to invent improvements" that an older rower has after years of plying the same waterway, and you get some cool efficiencies, like this one (or this one or this one--you get the idea!)

How do we know, you might ask, that this is indeed a hack and not just a casually draped former beach towel or two? Well, the fact that the towel is strapped down to the single with the socked rigger using a custom length boat strap is clue number one...and clue number two is that the sculler on the bottom has picked up the same trick. Clue number 3? Clearly, this sculler is a Rowing Hack fan in the first place, as evidenced by that sweet rigger socking.

So, mystery sculler whose boat we spied--and spied on--here is a tip of the hacker's cap for this easy yet foolproof way to get a few necessary jobs done at once. Your prized shell is buffered against the slings and arrows of community boat bay life, and those towels will be bone dry and ready to use as, well, towels, the next time you are done getting your miles in on the 'quan. Well hacked!

Are you a sculler with a cool hack that makes getting your outings in a bit easier and smoother? If so, share your tips--and hacks--in the comments below.