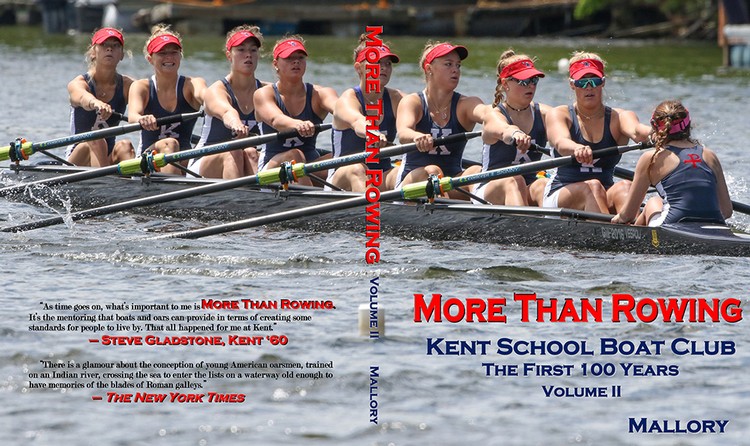 The cover of Volume II (photo by Sportgraphics)

Sometime later this year, Peter Mallory, good friend to row2k.com, will be coming out with a new book, More Than Rowing, Kent School Boat Club, The First 100 Years. As he did a decade ago with his four-volume masterwork, The Sport of Rowing, Peter will offer excerpts of his new history on row2k, and later this year the projected two-volume set will be available for purchase on row2k.

This deluxe two-volume book set is a celebration of the sport of rowing at one particular institution, but it is not intended only for Kent School alumni and alumnae. Names familiar to the wider rowing community appear and reappear, memorable people such as George Pocock, Karl Adam, Bill Stowe, Steve Gladstone, and Hart Perry.

The story of Kent Crew is a story of the triumph of the human spirit, of the ravages of war, of unspeakable tragedies, of the effect of global social movements, of rights and responsibilities, of coming of age, of family legacies and forever friendships - more than just about victories and defeats among boats on the water.

This book truly is about more than rowing, but ultimately it is the story of a century-long love affair with Henley-on-Thames.

Whether we dipped our oars or worked our rudders in the Thames or the Schuylkill River or Lake Washington or the mighty Housatonic, it is the story of us.

To begin a series of weekly excerpts on row2k.com, here is an early mock-up of the cover of Volume II. The photo is from my good friends at SportGraphics.