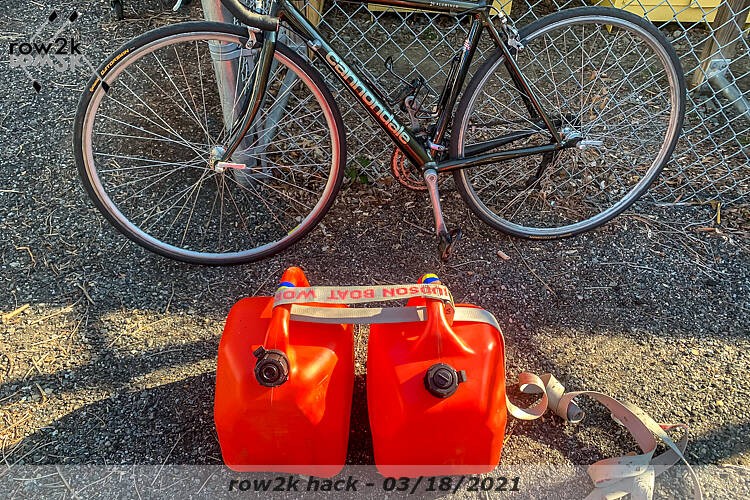 As a Rowing Hack, sometimes you do the Hacking, and sometimes the Hack finds you...if you follow the right Instagram accounts, that is. And so it was that this slick trick came to our attention: The GWMR Gascarrier 1.0™.

"GWMR" is, of course, George Washinton Men's Rowing, that hard working group of guys who row out of Thompsons Boats Center in DC: a facility that they share with heaps of other teams and which is, roughly, a quarter mile mile from the local Exxon station on the corner of Virginia Ave NW and Rock Creek Parkway. That quarter mile plays an important role in the genesis of the Gascarrier, because it is just short enough that generations of GW rowers have just walked over, and back, when the launches run dry.

Since it is probably more like .3 or .4 of a mile by the time you lug the gas all the way to the down stream end of the dock where the launches actually live--and since it definitely feels more like a full mile with the heavy cans on the return trip--GW coxswains Alec Esmond and Luke Ames decided to get to hacking.

Let's hear them tell the tale:

Alec: One afternoon, Luke and I were ordered to get gas for the next morning’s practice. Unfortunately, our other fellow coxswains on the team bailed on us. Disgruntled, we pedaled our way down to the boathouse. Along the way, I had an epiphany: What if we could use our bikes to carry the gas? Once we arrived at the boathouse, I found a boatstrap and tied two cans together, and draped them over my bike--Voila! The GWMR Gascarrier 1.0™ was born.

Luke: This was definitely a spur of the moment type thing, and a first for GW/TBC coxswains as far as we can tell. Carrying down gas has always been something the coxswains on the team do not look forward to....You could say that we were desperate for something to make the process easier. Before the GWMR Gascarrier 1.0™, we would either lug them to the boathouse ourselves or we would “borrow” a wagon that was laying around TBC. The wagon disappeared last fall so we had to improvise. 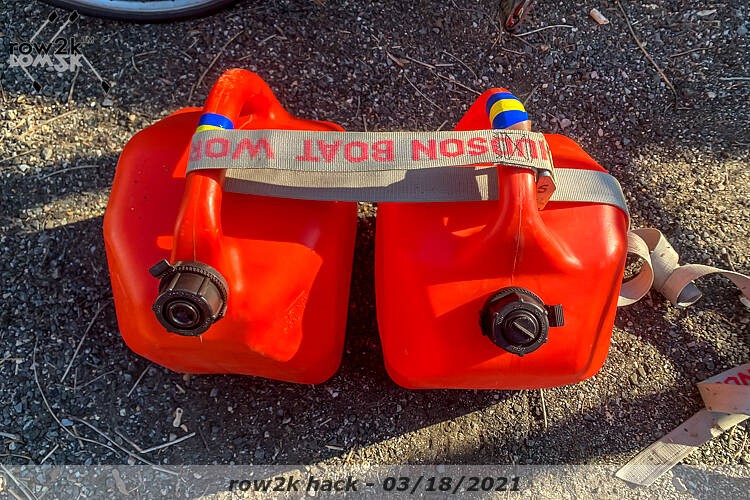 And the how of this hack is just as simple as it is good in Alec's retelling: "we used boat straps to tie the two cans together before draping them over the bike frame. Boat straps are all we could find around the boathouse so we haven’t really tried anything else." Good to hear that they might keep tweaking, but if you are a good enough hack to get it to work on the first try, that works for us.

Let's check the Hack score here: Necessary? Yep. Repurposing of "something lying around the boathouse" for new, useful task? Totally (can't beat a good strap hack). Spur of the moment idea that will now be used forever in our sport? Likely! And we will all have George Washington Men's Rowing to thank for it.

Now for the bad news, Hack Fans: Alec and Luke are savvy steersmen, so Alec promises that "we hope to patent the GWMR Gascarrier 1.0™ in the near future."

Actually, we are pretty sure he was kidding--he told us he would be "ecstatic" if it catches on--and so we'll let the father of the GWMR Gascarrier 1.0™ have the last word:

Alec: In all seriousness, we do hope that fellow coxswains and coaches find this idea useful when they find themselves in a similar situation as ours. We hope it will save a few backs/traps/sore muscles.

Well hacked, gents! If any of you loyal readers have a great trick that makes life easier for you share your tips--and hacks--in the comments below. 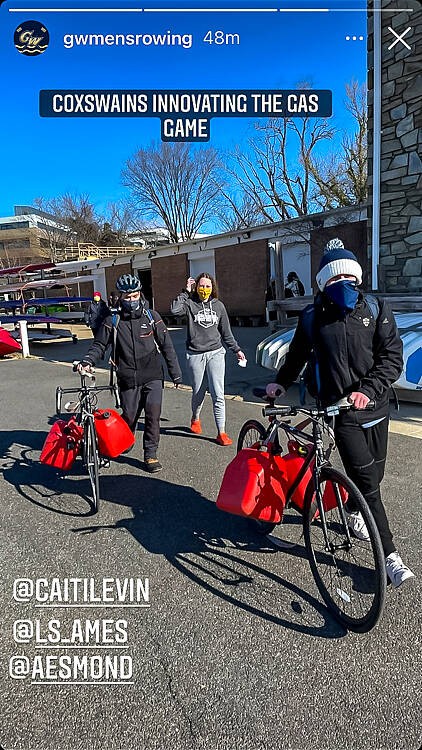