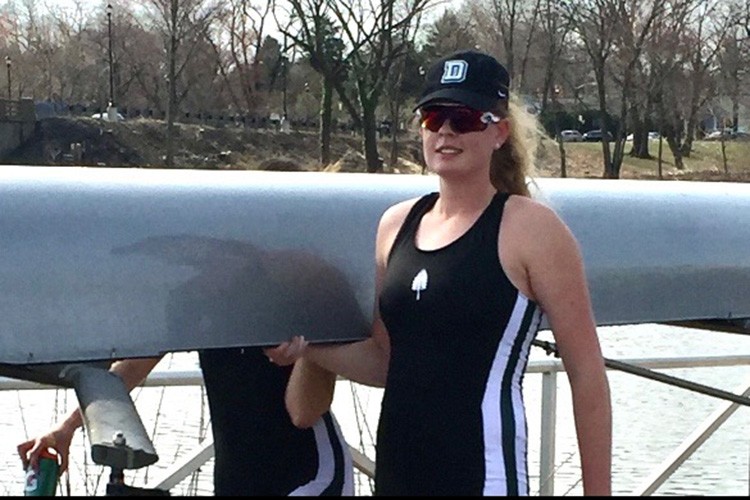 This week's row2k Interview is with Dartmouth junior Caitlin Lynch. We chat with Lynch about her path to Dartmouth and her love of exploring the skies.

row2k - How did you get your start in rowing?
Caitlin Lynch - Rowing first found me on a visit to Brown University during the Fall of my Freshman year of high school. While on a walk around one of the university’s quads, I was approached by one of the women’s rowing coaches and a few rowers who believed I was a Freshman at Brown. At the time, I was a full-time tennis player and competed in tournaments around Florida. I had hardly heard of rowing. After I admitted I was only a Freshman in high school, these Brown rowers spent awhile telling me all about the sport and why I should try it. I returned to Florida and decided to join a club at home. After just a couple rows, I was hooked. For the next few months, I tried to balance both sports, but realized I had to choose. I ultimately chose rowing, and haven’t looked back.

row2k - You’re now a junior at Dartmouth, how did you end up in Hanover, NH?
Caitlin Lynch - My education has always been very important to me. I worked hard in high school and wanted to continue my education at a challenging college. At the same time, I felt that I have invested a lot in rowing and wanted to take my athletic skills to the next level in college. Dartmouth’s high-regard in academics and research was one reason I chose it. The on-campus boathouse and being located in a quintessential college town were also major draws for me. I had a long drive between my home and rowing practice in high school, so I relished the idea of being able to walk everywhere I needed to go. However, what made my decision to attend Dartmouth was what I found during my interactions with the team and observing practices on my official visit. I had found a group of women who genuinely cared about each other’s success and wellbeing, both on and off the water. After getting to know the team on my visit, it seemed that each individual truly embraced their role in the growth of not only themselves, but of their teammates as well.

I first visited Dartmouth during my Junior year in the middle of winter. The sky was grey and we were dodging freezing drizzle all day. Although I quickly learned that New England’s winters can be brutal, I was excited to attend college somewhere very different from where I grew up in sunny Florida. And it has certainly paid off, as I learned to skate ski as part of our winter training and get to explore a part of our country I probably would not have otherwise seen.

row2k - You recently earned your pilot’s license. When did you become interested in flying and what has the certification process been like?
Caitlin Lynch - I come from a long line of aviators. My grandfather was a commercial airline pilot. My dad flew F-16’s in the US Air Force and also became a commercial airline pilot. My mom was a flight attendant. Having been exposed at a very young age, I’ve been interested in aviation a long time. I even learned to fly before I could drive! During my pilot training, I found that both rowing and flying gave very similar feelings. The sense of accomplishment of mastering traffic patterns and executing a planned cross-country flight in the Cessna 150 felt very similar to that feeling at the end of a hard-fought 2k. I found that both rowing and flying were safe spaces for me to push my limitations and enjoy my hard work paying off. 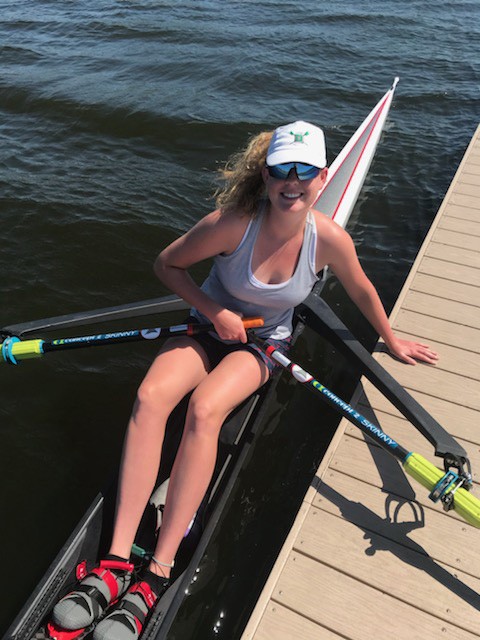 Training for a private pilot’s license requires a combination of night flying, cross country (a flight of more than 150nm), take offs and landings, and competency in basic flight maneuvers. Many of these requirements must all be accomplished solo, meaning you’re alone in the airplane. A written and oral exam are required along with a flight with an FAA examiner as the final test for the license. I think my experience with racing and testing on the erg have given me the confidence to excel under the nerves and pressure from challenges outside of rowing, like flying. Rowers seem to be very good at rising to the challenge when success is the only option. Over the years rowing, I’ve been able to harness my “rower’s confidence” outside of the sport. It has helped me excel, not just survive, in demanding times. When I was on final for the runway during my checkride, I remember thinking to myself “If I can PR on a 2k, then I can definitely nail this cross-wind landing to impress the examiner.”

I recently joined a flying club while here in Houston to keep my skills sharp and start the process to earning my instrument rating. I’m excited to grow as a pilot by flying new airplanes in a very different area than the Tampa Bay region.

row2k - You have an internship with NASA, how did that come about and what are doing with them?
Caitlin Lynch - I am working with NASA and their contractor, KBR, in flight operations for the ISS and Orion vehicle. Flight operations consists of monitoring and sending commands to the various systems on the station and communicating with the crew. I am also getting certified to teach one of the courses taught to new ISS crews during their training.

Exploration has been an important part of my identity for as longs I can remember. When I was little, I’ve enjoyed finding fossils, around Florida and the country. My love of exploring has taken me to the seafloor to observe marine life, to the skies to understand the land and ocean from a pilot’s perspective. Now, I’m taking my exploration to beyond our atmosphere.

Throughout COVID, I’ve learned that flexibility is key to seizing opportunity when it presents itself. Throughout the past year, I submitted many applications for internships at government and private aerospace organizations in spite of the bleak employment prospects. I continued to reach out to and stay in contact with my network to inquire about opportunities and keep an ear to the ground in the industry. When extended this offer to work with KBR and NASA, I knew this was an opportunity I could not pass up. There’s even a rowing club next to Johnson Space Center I’ve joined to get some time in a 1x several times a week.

row2k - How well did you and your team cope with all the unexpected COVID-19 issues in the spring and fall?
Caitlin Lynch - Although I’ve been away from campus since last March, I’ve heard only good things from my teammates on campus about fall and winter training. Dartmouth Women’s Rowing refuses to let COVID take away from our goal of being the fastest rowers we can be. We have weekly team meetings scheduled to connect the entire team and catch up with each other. In addition to sharing workouts, we have various speakers from DP2 (Dartmouth’s athletic support team) that allow everyone to continue taking advantage of the resources available to us as varsity athletes. The resilience that my fellow teammates have demonstrated never ceases to amaze me. The recent reinstatement of our Lightweight Mens’ team has also helped keep morale high at the boathouse. We are certainly glad they’ll be rowing with us on the Connecticut again soon!

The restrictions that have evolved around the coronavirus have delayed and damaged a lot of things in our society. As a college engineering student, I’ve felt my share of the burden brought by COVID. However, very early on, I became determined to continue making progress on my education and professional goals in spite of the apparent roadblocks. 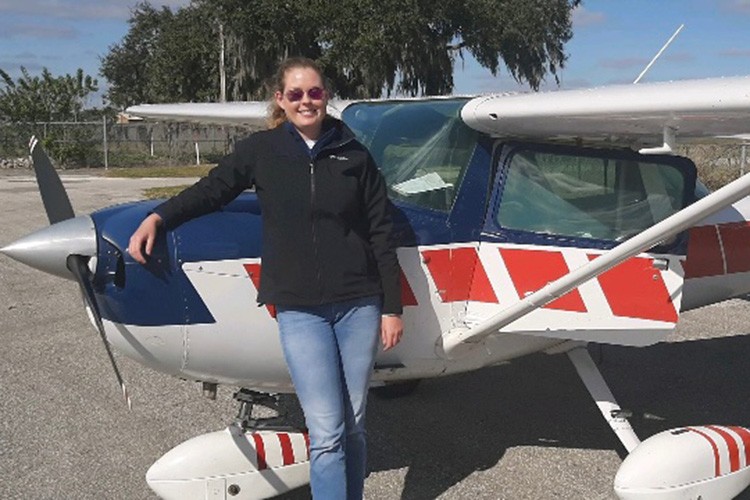 Like many other students around the world, I continued working toward my engineering degree with online classes. Virtual labs were challenging, and trying to collaborate in groups and attend office hours over Zoom certainly takes a toll. However, I learned through this time that opportunity comes in many forms. Hanging around the local airport near my Florida home landed me an internship for the summer and fall at a local engineering company, called Hascall-Denke, that manufactures military-grade antennas.

Being home in Florida, I was also able to complete my first high power certification in model rocketry. This means that I can launch large model rockets with more powerful motors. I’m currently working on getting the next high-power certification. The rocket I’ve built for that certification launch is taller than me! I was able to devote more time to planning the annual Ivy Space Coalition Conference, held in February. This conference aims to bring together college students and professionals with an interest in all things aerospace to share their experiences and network with other attendees. As co-president, along with my colleagues from across the Ivy League, we worked hard over the past several months contacting speakers and adapting our conference to an online format. I'm glad to say that this year's virtual conference was a great success. We've already started preparations for next year's conference, which will be hosted by Dartmouth!

row2k - What do you like most about the sport of rowing?
Caitlin Lynch - My favorite thing about rowing is that I get to be outside and on the water. Rowers like myself sometimes get caught up in the grueling aspects of the sport, watching the sun set on the intracoastal during my time at Sarasota Crew or listening to the wind rustle the pine trees along the shore of the Connecticut River always brought me joy and serenity even on my toughest days. Each day on the water reminds me how lucky I am to be sitting in a boat with my teammates. I get to leave behind my worries on land for a couple hours, and just focus on my stroke and take in all the amazing things around me. The past year has taught me that no matter how blistered my hands get, each practice is a gift in more ways than one.

row2k - What are you studying at Dartmouth and do you have any plans for after graduation?
Caitlin Lynch - I’m majoring in Engineering Sciences with a mechanical engineering concentration. Outside of the classroom, I am gaining practical engineering experience in the Department of Physics and Astronomy in the lab of Professor Kristina Lynch (the last name is coincidence). Our lab concentrates in creating small instruments launched on NASA sounding rockets into the aurora to take voltage measurements. I had the opportunity to learn 3D design software to help modify the brackets that attach these instruments to the rocket payload. Currently, I am learning about satellite orbital properties in a new project that consists of a large satellite constellation that will be launched in the next several years. I’ve been able to take a front row seat in designing the orbits for these satellites to ensure they overfly certain locations at the correct time.

If presented with the opportunity, I would love to continue my flight operations journey with KBR and NASA to become either a fully certified flight controller for the ISS or the Orion vehicle team. Another goal of mine is to become a test pilot. Test flying new aircraft presents the perfect confluence of the highest degree of flying skill and the problem-solving abilities that engineers must employ. I hope that this will one day lead me to space.