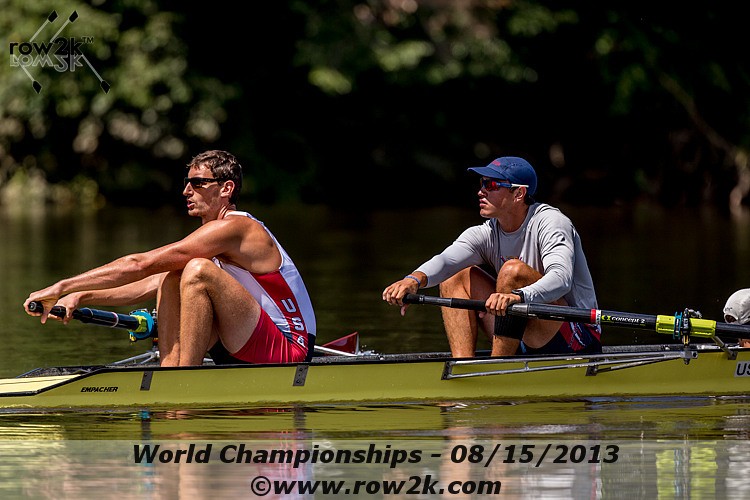 Since the publication of my book, "Biomechanics of Rowing", several readers have posed questions where the common query was my "catch through the stretcher" concept. Rob Fryer, an automotive engineer and a volunteer coach from Oxford, asked: "Why would we not try to reduce the negative (boat) acceleration (at the catch)? Surely we would want to reduce any losses in the system by reducing the negative acceleration?"

2. The stretcher force is an internal one in the rowing system: pushing the stretcher creates backward acceleration ("stopping") of the boat mass, but according to Newton's 3rd Law, it accelerates the rower's mass forward, so the velocity of the whole system does not change. You can check this easily, if you move back and forth on the slides with flat blades on the water's surface: you'll remain in the same place and won't move forward, but you won't move backwards either. Only the blade force and drag are external forces and move the whole system.

3. Stretcher force is an important part of the power transfer in the rower-boat system: it is transferred through the boat-rigger-pin-gate to the middle of the oar and creates propulsive force with the blade. About 40% of rowing power is transferred through the stretcher (RBN 2004/06, 2008/12), and without stretcher force rowing is not possible. You can check it trying to row with your feet sliding on a boat canvas, without pushing the stretcher: you'll be able to push the boat forward slightly, but you'll pull yourself backwards, so the whole system won't move.

4. From the simple experiment above, we can see that the stretcher force is the only force that accelerates the rower's mass forward - the heaviest part of the system. Contrarily, pulling the handle moves the rower's mass backwards.

5. Working through the stretcher, rowers engage the most powerful and efficient muscles of human body: legs and glutes. Attempts to "pull the handle before pushing the stretcher" at the catch inevitably engages the smaller muscles in the upper body, arms and shoulders, which were proved to be less efficient. 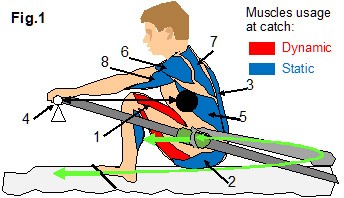 6. The handle and stretcher forces are integrally connected, and only this couple can create a propulsive force at the blade. This was well illustrated with the canoeing analogy (RBN 2008/10), where the stretcher force in rowing works as the pulling arm in canoeing - at the middle of the oar, and the handle force is similar to the pushing arm in canoeing at the far side from the blade. A canoeist can't succeed trying to "push without pull", so and a rower can't propel the system with the handle force only. By the way, this is applicable not only at the catch, but also and at the finish: the drive is not productive as soon as you stop pushing the stretcher. If you feel this, you'd better cut the drive, go for the next stroke and don't waste your time and efforts. Moreover, if you start pulling the stretcher forward while the blade is still in the water, you'll create a negative braking force at the blade. This is seen when rowers row backwards (back down) to get onto a pontoon: the stretcher is pulled towards the bow in this case.

7. A deep and sharp (short in time) negative peak of the boat acceleration, "boat stopping" at the catch gives a mechanical advantage to "connect" the blade to the water quicker. When at the catch, the blade stops relative to the boat, its velocity relative to the water is equal to the boat velocity. So, the slower the boat at this moment - the easier it is for a rower to "connect" to the water and create a propulsive force. To do this, the blade should be accelerated backwards, and it's better to push it at the middle through the stretcher - gate - sleeve using a longer outboard lever, rather than through the handle with shorter inboard.

8. Negative target values of the Catch Factor (seat changing direction earlier than the handle) doesn't mean "bum shooting," because this is very short time (25ms=0.025s) at the instant of the catch, when velocities are close to zero. The seat moves only about 1cm during this time, and the blade is still in the air, so only small inertia forces are applied to the handle and stretcher. At this time, it makes sense to use relatively small quads muscles (Fig.1,1), to extend the knee and accelerate the boat and rower's masses relative to each other. "Opening the trunk" at this moment would waste more powerful glutes (2) and long back muscles (3, Erector spinae), which would be more useful during the drive, at the highest forces.

9. Starting the drive with legs (90% target Rowing Style Factor RSF) doesn't mean "bum shooting" either. The muscles of the back and upper body must be prepared to transfer the force statically, which creates a "point of support" for the oar at the handle (Fig.1,4). It is very important to stabilise the shoulder joint in the down-forward position using the lats (5), deltoids (6), trapezoids (7) and triceps (8), and keep straight and strong posture of the trunk with the erector spinae (3). A verbal expression "hold the block" is used to describe upper body at catch. If this is not achieved and seat moves faster that the handle (RSF>100%), the legs power would be wasted for stretching the upper body and not transferred to the handle.

10. "Is it possible to teach "catch through the stretcher" to beginners? Could it develop "bum shooting"?" Our experience proved that learning this technique early on could be very effective. Of course, the strong posture of the upper body should never be overlooked and should be established in the first place.

On the Topic of 'Boat Check'