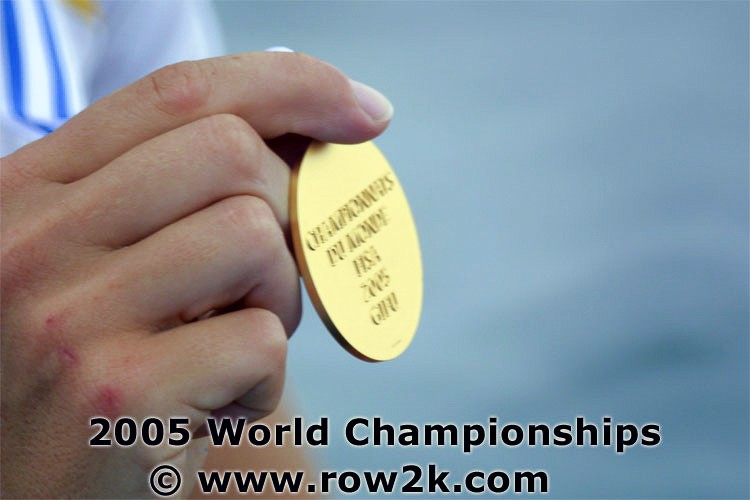 Annie Vernon competed for the GB in the women's single, double, quad and eight between 2005 and the London Olympics in 2012, capturing an Olympic Silver in Beijing in 2008, as well as world titles in the women's quad in 2007 and 2010 and a silver in the women's double in 2009. row2k caught up with Vernon in fall of 2020 shortly after the publication of her new book, "Mind Games: an insider's guide to the psychology of elite athletes.". This is the second of three parts, read part I here.

Vernon: Okay, fine, bobsled. In rowing, you can be a one, you can be a two, you can be a four, you can be an eight, which is crazy. I would say each one definitely tests your ability to adapt psychologically to that group but that's one of the reasons I think rowing is so interesting. You have to be good at doing things totally on your own, just you and a coach, or you might be in a scenario where you're part of a team of nine, which is totally different. 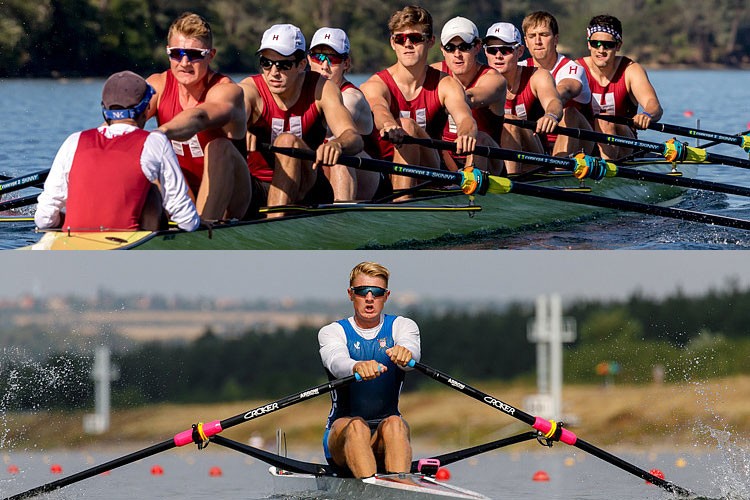 row2k: In rowing, at least in the States, there is a tendency to use the word "crazy" to describe people that that do incredibly bold things in a rowing race. You think of the French pair at Sydney 2000 or the South African lightweights in London or even the German women's double in the outside lane in Beijing, observers will say something like, "Oh, that was a crazy race," but isn't that essentially an inversion? If somebody does something so bold, isn't that more an expression of psychological strength?

Vernon: I suppose I'd want to look at it from the perspective of why did those athletes do the crazy thing. The interesting piece about the French men's pair, is that when they launched their unbelievable "do or die" push to the finish, they both shouted the names of their children.

I think is this is so interesting because, with some of the big rivalries, in tennis for example, Roger Federer and Rafael Nadal, apparently really like each other. There's are other rivalries, you know, where teams hate each other; here in Premier League in football, you've got local derbies, the two Manchester teams and the two Liverpool teams, where there's fighting on the pitch. They actually hate each other. For me, the French men's pair is really interesting because you think, "Some teams are motivated by hating their opposition. Is that stronger than being motivated by loving something?" Which gives you a stronger outcome, hating something or loving something?

I don't know the answer. I'm interested in why the crews feel like they can do that and why they haven't done that before. Take the German women's double in the Beijing final. That race was my greatest of all time to watch. They damn nearly won it, but they hadn't really shown at the regatta before. They came second in their repechage, so, they weren't going particularly fast up until then. Why didn't they race like that previously? Of course, you could say, "Oh, it was the final, it brings something amazing out of people," and it does, but at the same time you must have had an idea that you were capable of that and, if you weren't, then you presumably weren't pushing yourself that well previously. 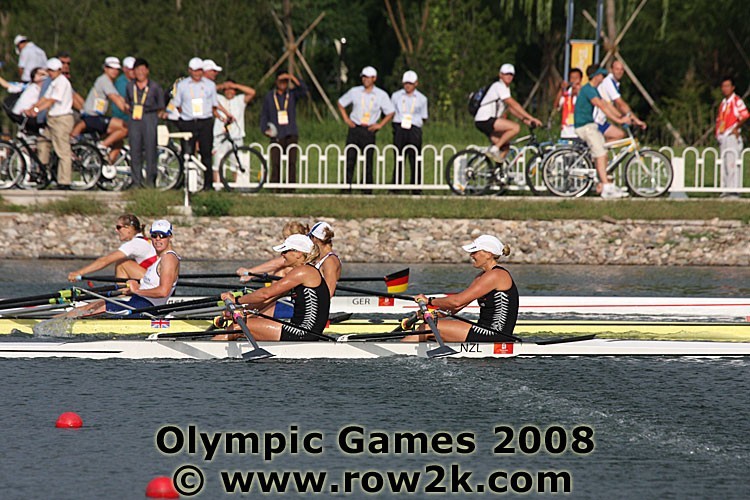 Wild finish in the W2x at the Beijing Olympics

We all have days where it just clicks but it shouldn't click that you go from being good to being extraordinary. It should click so you've got one gear; whereas, the crews you just mentioned, they almost went up 10 gears. You try to control everything about your performance but it's almost like there was just one bit, of all of those crews, there was an uncontrollable thing that suddenly popped out of nowhere in one race. Like that German double, it wasn't there in World Cups, it wasn't there in the heat, it wasn't there in the repechage, but it was there in the final. You think, "Well, why wasn't it there earlier?"

row2k: The conventional wisdom in rowing is that you can't depend on finding something on race day that you haven't done in practice. So were those races an expression of confidence?

Vernon: I don't know. In some ways, as an elite athlete, you set everything up so you're in control. You don't want any surprises. You just want to go out and execute your best performance and you should know how to do that by that point. I say in the book that the biggest performances are often the easiest because you're prepared. You know absolutely everything about how you're going to race that race. Whereas, the less important performances, you don't really know what you're doing and you're not quite sure how you will perform. So, actually, they are harder psychologically. 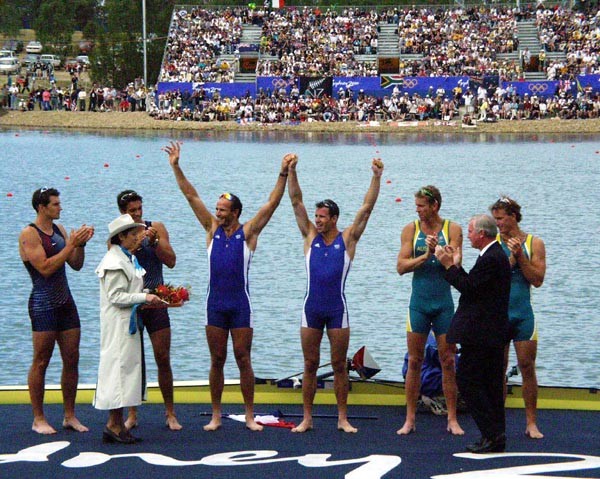 The French M2- in Sydney

In some ways I think it comes down to trust. "Okay, we're going to try something slightly new in the final. We've never done this before but we're just going to see how it happens." But you can't just do everything new. You know, you're saying, "We're going to do 90% of what we normally do and that last 10% is going to be the unknown." In order to get to that point, you have to have so much trust in that 90% that it's going to happen as you as you expect, and then that last 10% is going to be special.

row2k: You write that mental skills separate the merely good from the great. Is this bulletproof mindset an absolute must have for an elite athlete, or can you compensate for a psychological lack or fragility through physical talent or exceptional preparation?

Vernon: That's almost the Holy Grail in sport, isn't it? How much is it down to natural ability and how much is it down to everything else? By one token, you could say there's a hell of a lot of really good athletes in every sport that are good enough to make it on paper but never do.

For every Usain Bolt, there might be another hundred people who could go as fast as him but, for one reason or another, don't quite make it. Or you might have another 100-meter sprinter who has everything set up mentally, who has trained really hard, does all the right things away from the track, eating, sleeping, resting, flexibility, but ultimately, if they can't run a hundred meters in less than 10 seconds, they're just not going to be enough. I don't really know what the balance is between ability and mentality, it's something I've often thought about. Is it 50/50? Having the kind of natural ability versus all the stuff you can control, or is one stronger than the other?

I can think of a few people I rowed with on the British rowing team who were great athletes, didn't quite have it upstairs, but were still good enough. One guy in particular who became Olympic champion, I wouldn't necessarily say that he was the complete package at all, but he was a good enough athlete, a good enough rower, and that kind of compensated for everything else. And I can think of people who were just amazing mentally and that did compensate in some way for their lack of ability. In a roundabout answer to your question, I would say it just varies for different people. You know, some people get there through blood, sweat, and tears and the mental side. Some people get that because they've just got God's gift for rowing. 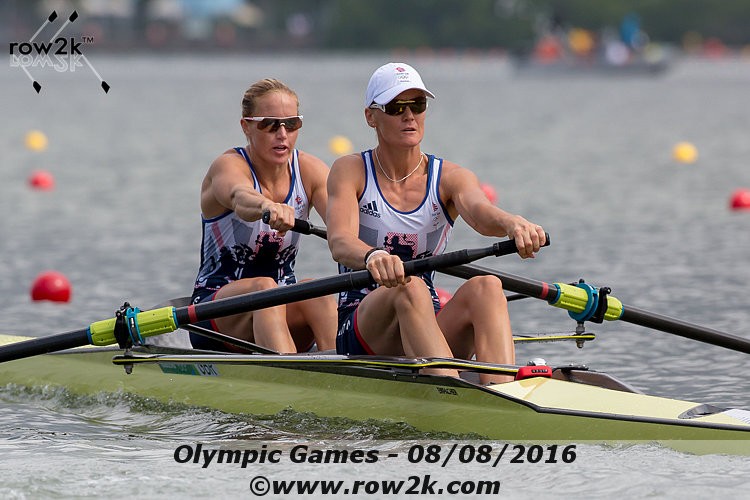 row2k: During your own active career or observing rowing, were there any athletes who really surprised you in that way?

Vernon: Someone who springs to mind is Heather Stanning [GB Olympic gold medalist in '12 and '16, eds]. Heather and Helen [Glover, Stanning's partner] kind of came out of nowhere; they were both really young. Helen always had this unbelievable physical ability, this unbelievable engine, so it's pretty obvious where her success comes from. Heather, she's not the most powerful at all. She's super relaxed. She's really, really nice. She's in the Army, so for her, the attitude to rowing is kind of, "I'll do it for a few years, see how I get on but my real focus is my career in the Army." In some ways, she's not the classic athlete. She never appears totally driven in what she does and I couldn't tell you what her 2k, but she's just an unbelievable boat mover. They barely lost a race for six years, but it was never quite clear how she was doing it. But, in a pair, you're 50% of the crew, so it wasn't like she was just getting by.

She wasn't just there to keep Helen rowing in a straight line. She almost broke the mold in what I thought the attributes to be successful were.