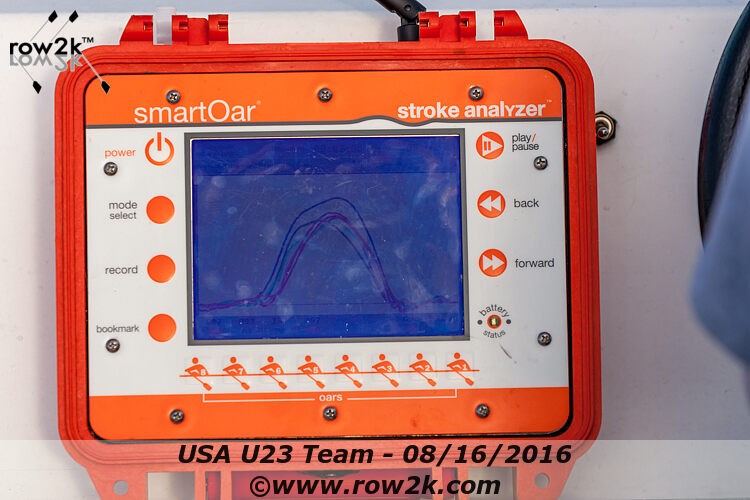 This week we focus on the topic of Rowing Technique with the following question:

WHAT ROWING TECHNOLOGY HAVE YOU FOUND THE MOST HELPFUL TO COACHING?

TOM BOHRER – BOSTON UNIVERSITY MEN
The EmPower oarlocks have been a good tool for us. It reinforces what is being seen in the launch, such as time to connect, or washing out at the finish. I like the catch/finish angle feature. It helps with fine tuning of the boat to get all angles together.

I also realized that when we first started using the locks we were rowing too long at the catch. When we reduced the catch angle by a few degrees we were able to create a sharper catch and a more dynamic impulse to the stroke. The oarlock also records power in the lock each stroke so we look at that data when we switch athletes to see if there is any drop in power throughout a piece. If everything is calibrated, the data is pretty accurate.

MEGAN COOK-CARCAGNO – DUKE WOMEN
There are a lot of great gadgets like SpeedCoaches and drag devices, but nothing matches the simple teaching that is created through video. A picture is always worth a thousand words (through a megaphone).

ETHAN SHOEMAKER - STETSON
Perhaps not what is being asked in this question, but I have found a simple mirror next to the erg has had the most positive impact on an athlete's technical development. Athletes will listen to me tell them what I want them to change only so much. Once they see if for themselves in a mirror in real time, they are suddenly making all kinds of changes. I find when I don't think the rower understands what I want anymore, I put them in front of a mirror on the erg and walk them through things. It works almost every time.

LUKE AGNINI – GEORGETOWN HEAVYWEIGHT MEN
The EmPower oarlocks have been interesting. They help the athlete connect the dots between making a technical change and seeing positive feedback, which then hopefully helps manufacture what the proper stroke should "feel" like. But it was also easy to get stuck in the weeds on certain measurements like front and back end angles, where in the end I would rather trust my eye. Great tool to keep the athletes honest though, we have even used them in races and had good success with it.

Honestly cell phone cameras have really helped with the ability to take video and immediately distribute it to the athlete. Most times when you are working on something with an athlete, they will come up to you after practice and say, "how did it look?" Sometimes they get stuck on making it look a certain way. I like to be able to tell them, hey you really made x change and the boat took off, here's a time in the workout when you were doing it well and here's what it looked like.

Or, you can say, "didn't see how it looked, you were too far back!" Some of these coaching apps are great too, where you can analyze video, slow it down and send them a recording with a voice over, it really helps with time management.

KEMP SAVAGE – EASTERN MICHIGAN
I have really used the slo-mo function on my iPhone to get high quality technical video from the launch.

BART THOMPSON – ADRIAN
I have a number of friends who've spoken of how much the NK EmPower Oarlock or the Peach system have impacted them, so those are ones I'd love to use but haven't yet. Personally, I think that phone cameras are powerful because it allows you to show the athletes how they're rowing. I also love a SpeedCoach in small boats—put your athletes in a time trial situation in small boats and it gives them actionable and brutally honest feedback on how well they're moving the boat.

TODD KENNETT – CORNELL HEAVYWEIGHT MEN
SpeedCoach. You have to be careful how you read the numbers compared to the conditions, but it tells you if you went faster or slower! It does not think something is faster or slower like a coach's eye and brain, it actually measures speed. You can interpret incorrectly, but it does measure scientifically. When that says we went faster doing something new, old, together, well, it is pretty good idea to take note and try to replicate that action. 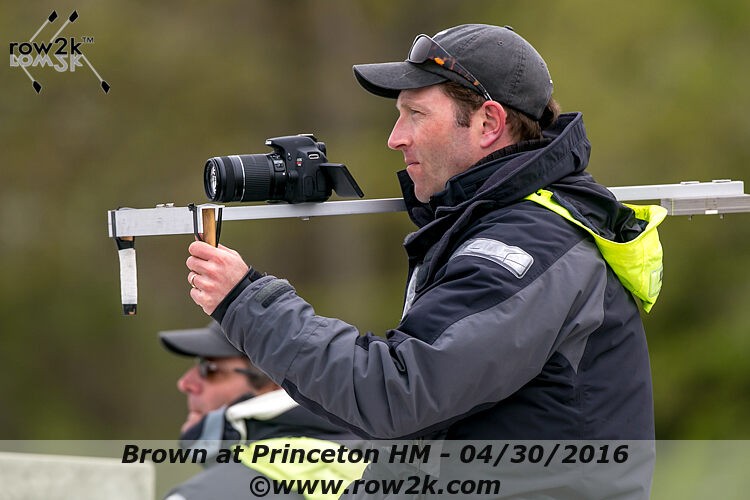 I remember a very good lightweight crew I had. They were preparing for the IRA. We were obsessed with one of our competitors who had killed us during the start at Sprints. They could rate over 48spm. We thought we had to do the same. We practiced and practiced. To me, it was getting better, but it was not right. The guys in the boat were sure it was right. So finally, about 5 days before the race we had a practice to make a final call on this. I asked the crew to do 6 starting sequences. We would alternate from high 45+ to low 42spm (not a stroke higher but rather pull harder). Every single lower start was three to five splits faster on the SpeedCoach. It was giving us the answer on what our best speed was. So, on race day at the IRA, the crew never rowed above 42, and they led wire to wire and won. I am certain if not for the SpeedCoach we would have rowed it too high, and maybe we still would have won, but we would have been spinning wheels and given up some of the speed which might have changed the entire race result!

Secondly, video. As a national team coach said to me after he shredded my rowing technique, the VIDEO DOES NOT LIE! You cannot hide on it. Slow it down and you can always find more work to do.

ALICEA STRODEL – MINNESOTA WOMEN
A stopwatch. Knowing the speed and going to it is the truth serum.

ERIC GEHRKE – GEORGE WASHINGTON MEN
I have found the data from an RP3 is very useful, the video feedback from Hudl Technique is extremely helpful, and the telemetry from EmPower oarlocks can help create transparency of learning for your athletes.

BILL ZACK – SAN DIEGO STATE WOMEN
It's hard to believe that when I started rowing, we had to guesstimate our boat speed by watching the puddle spacing. I think I would be lost now if I didn't have a GPS SpeedCoach with every crew that I coach. I'm also a big proponent of the EmPower oarlocks. Our top group of athletes all understand slip and wash and peak force angle and the other measured parameters and take a lot of pride in trying to improve their numbers. 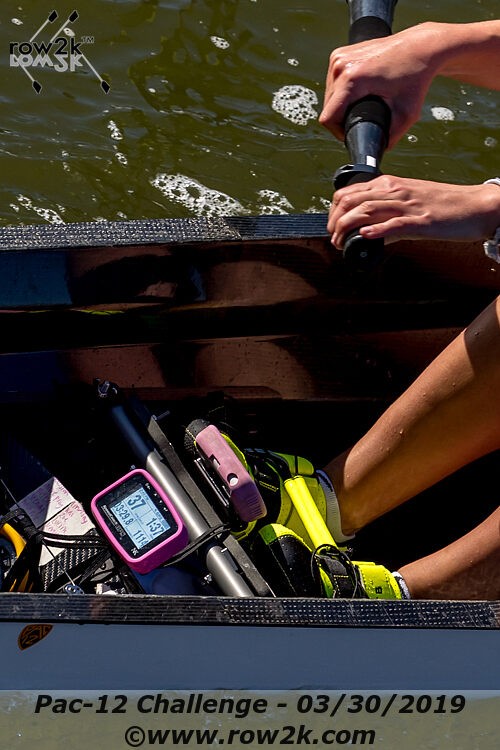 ANONYMOUS HEAD COACH
Any piece of technology that has allowed us to see the splits of the crews while on the water. Be that a SpeedCoach XL or the NK GPS app.

BRIAN DAWE – TUFTS
Any SpeedCoach, wired or not, that is consistent. The EmPower oarlocks have some promise and I would give anything to get one of the gizmos the Canadians or Australians are using to measure speed/force/power/acceleration data throughout each stroke cycle at high frequency.

JENN LANGZETTEL – DUQUESNE WOMEN
Video is the most helpful to get kids to understand what they are executing and what you are looking for them to execute. We keep it pretty simple.

CAMPBELL WOODS – MARIST MEN
Honestly, I think that cell phones have created a huge change with our ability to take and share video on a daily basis. We have rapidly sped up the ability of our athletes to get instant feedback on how they are rowing. As far as rowing specific tech, dynamic ergs of any sort are enabling us to more safely train the volume we need on the erg while simultaneously making the ergometer feel more and more like the boat!

ANONYMOUS HEAD COACH
Any piece of technology that has allowed us to see the splits of the crews while on the water. Be that a SpeedCoach XL or the NK GPS app.

AL ACOSTA – CALIFORNIA, BERKELEY WOMEN
The C2 oar and hatchet blade design. NK GPS SpeedCoaches have been helpful too. But if I was on a deserted island and I could take only one piece of rowing technology with me, it would be the C2 oar. That way I could row off the island!

DAN ROOCK – DARTMOUTH LIGHTWEIGHT MEN
A stopwatch for me and heart rate monitors for the rowers. All the new-fangled gadgets have yet to impress. 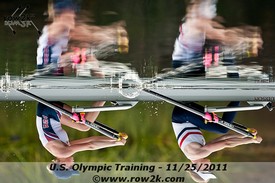 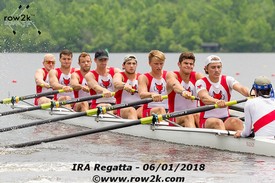 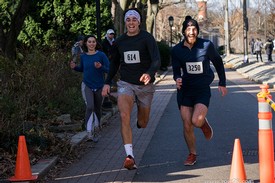 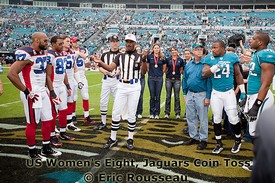