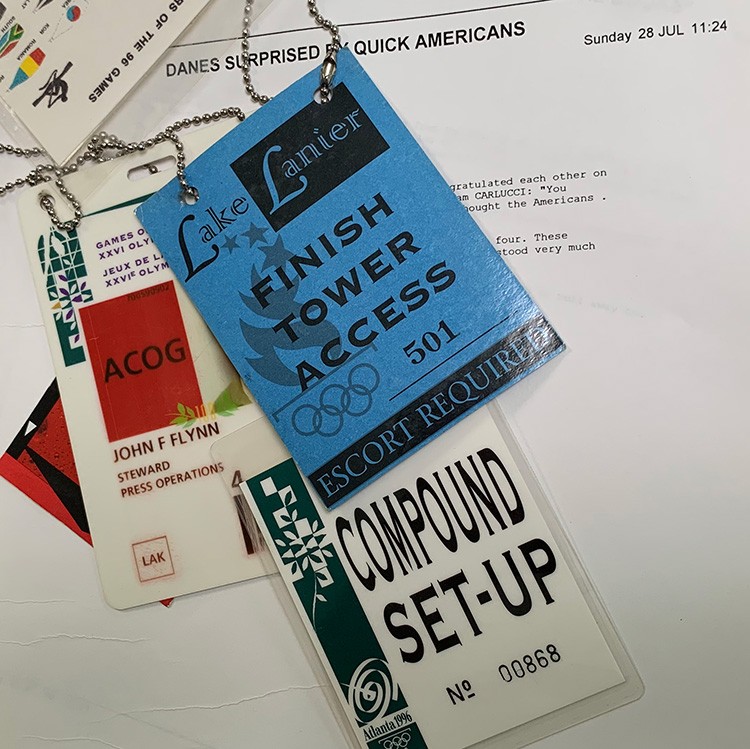 As we all seen in the Wayback Wednesday feature, row2k's Adam Bruce has done some pretty heavy lifting and yeoman-like research to find heaps of photos from the lengthy pre-row2k era, but a few weeks back, when he pitched the idea of putting together a 1996 Olympics Wayback, we did not have to look much farther than our own dusty storage boxes. Oli and Ed and I were all in "Hotlanta" that sweltering week in July 1996, though no one had even thought of something called row2k at that point...the internet itself was hardly a thing then, after all, and any--and all--rowing media coverage back then was of the old school newsprint variety.

Nope, we were mostly just there as rowing fans--along with what seemed like every current and former college rower in the US, all jammed into the massive grandstand that was purpose-built for the Games (and then purpose un-built just as quickly afterwards). We are not even exaggerating here: the nightly meet-ups at the Monkey Barrel in "downtown" Gainesville featured just about everybody I have ever met in the sport who was "in it" at the time.

The result? A shoebox in each of our houses--literally one, in my case--full of snapshots that we took at the time, as much to remember our time at the Games as to record any of it for any kind of public posterity. Oli clearly brought a bigger lens for the photos he was able to dig up for Adam, but in a rare stroke of luck, me and my crappy Pentax--also currently in a matching and equally dusty shoebox--had way better seats. How so? Well, because I had volunteered myself as a "Press Steward" (whatever that meant) and got to spend a full month at the venue that summer: sweet Olympic Volunteer shirt, straw hat, and all.

So that volunteering was what brought me to the flash quote dock during the finals--watching the legendary Bob Ernst interview the history making USA Light Men's Four--and having the presence of mind to snap a few pics of the action. The story behind that photo, and the conversation that followed amongst the first ever lightweight sweep medalists in 100 years of Olympic rowing is a good one and so, at the risk of making this week super 1996-heavy, here we go:

It all started with the crazy idea to volunteer, and the fact that this was even an option for getting "backstage access" to the American Olympics goes right to the heart of how Atlanta became an Olympic Host City in the first place.

Some folks may remember that the Atlanta Games were put on in a hot hurry, when the Atlanta bid swept in and rescued the IOC from the failed attempt to stage those '96 Games in Athens for the 100th Anniversary of the Modern Olympics (it would take Athens another full 8 years to get itself ready to host the 2004 Games). So, it was Atlanta that got to host the Centennial Olympics, and not for any historical connection or purpose, but simply because they were willing and, basically, able. Thanks to the massive sports infrastructure of an SEC state and professional sports town, Atlanta could quickly spin up the venues, and the Atlanta Committee for the Olympic Games (ACOG) also had two "aces in the hole" for running the Games on short notice and at relatively low-cost: ticket sales and a volunteer army.

The ticket sales--and the idea of packing Olympic venues with spectators like they were NASCAR races or college football games--led to a ton of traffic woes for the IOC mucky-mucks who were far more accustomed to sharing Olympic venues with just the families of the athletes and maybe a few die-hard Olympic tourists...and the traffic issues, I am pretty sure, gave birth, right there in Georgia, to the "IOC-only" traffic lanes that are now a feature of any Games bid and infrastructure

And the volunteer army? Well, they were great: full of Southern hospitality, can-do spirit and, kidding aside, super generous with their time and their hometowns. Up in Gainesville, where the rowing and canoe venue landed--and that's another cost-cutting, "do it in a hurry" story for another time--it certainly seemed like the whole town was volunteering, in one way or other, to help make the Games run. For the most part, the volunteer effort was a big success and itself became a template for future, bigger Olympics, but there were also more than a few bus drivers from NYC who got a little lost driving the MTA buses that Atlanta had borrowed...and that made the news, too. (As an side, it was super weird, as a lifelong New Yorker, to turn up for my first shuttle ride to the venue, only to find myself boarding an NYC Transit bus, still complete with all the crazy skin care doctor ads you only find on MTA buses and subway cars). 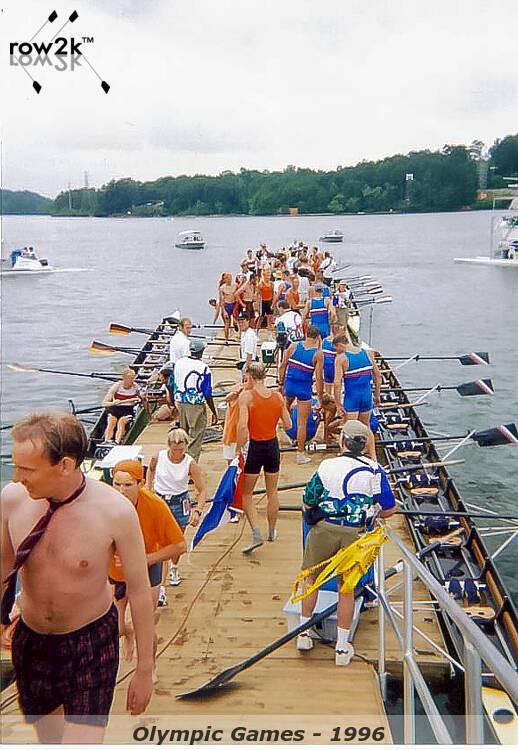 In any event, all of that put me, on Finals Day, in the best spot on the whole lake: right at the finish line, on the "flash quotes" dock where all the medalists pulled in after they won, or lost, to talk with, well, me--and a few, far more professional folks.

Due to a quirk of the venue, all the broadcasters--to include Bob Ernst in that sweet 1990s NBC polo shirt--were on the grandstand side, with the "regular folk" spectators, but the medals were to be given out on the Finish Tower side of the course, in front of the VIP "Olympic Family" seating area -- the one where Chelsea Clinton was sitting one day, as the First Daughter would do.

How, then, to get tv interviews for the cameras with sweaty, exuberant, and newly-minted Olympic medalists? Simple: just have them make two stops after the most grueling physical endeavor of their lives. First, they would row over to the flash quotes dock, get out, have a chat, then they would get back in the boat and row over to the medals dock and repeat--sans chat, but plus medals and anthem. (This kind of workaround--doing something that made sense in a practical way but not so much in a rowing way--was typical of the Atlanta organizers in my experience . . . and was the same sort of thinking that led to some hot dogging by the Georgia Fishery Wardens who were patrolling the lake the morning of the finals, during which they ripped out the cables for the alignment system at the start--forcing the officials to go old school to line up the medal races).

So there I was, in the "you can't go get your medal yet" purgatory of the flash quotes dock, rubbing elbows with legends and asking them inane questions like 'What was it like to race against Steve Redgrave '("He's a hard man to row down," was what David Weightman of Australia told me) and how do you feel about silver (ugh, right?), to which his partner, Rob Scott, said, "Once the dust settles, I think I'll be pleased with that. It was a good row." Which is a classic case of a great answer saving a lame question. 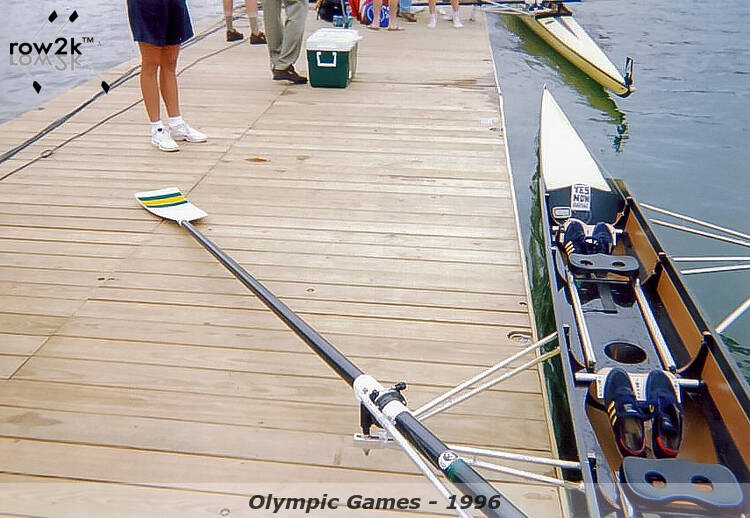 To be fair, I was getting better as the day went on, remembering to ask the USA Men's quad a question about their upset silver, to which Tim Young replied, "It was so sweet to do that in everybody's face"--and I got a great shot of the note that Aussie Stroke/legend James Tompkins was staring at the whole time they were crushing the Men's Four final in the last Olympics before the Brits took up permanent residence in that event--Oarsome Foursome indeed! 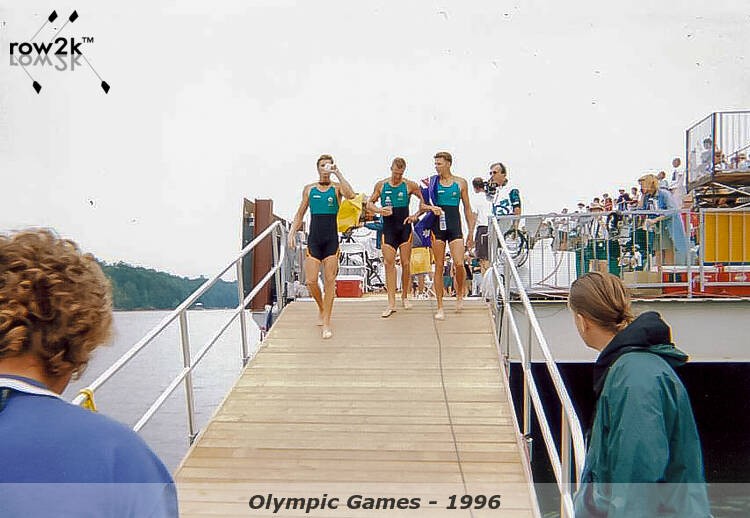 It also meant I was standing *right there* when Redgrave famously retired for about 30 seconds, telling us all that, "If you ever catch me near a boat again, shoot me!" I never took Sir Steve up on that, obviously, but it takes a brave man to utter those words in the woods of Northeast Georgia, so I am guessing he really did mean it at the time.

The best moment, though, was the story behind the photo of the Light Men's fours. The competition for that first Lightweight Men's race at the Olympic had been brutal, with nearly every elite light rower who was within a decade of his prime taking a shot at making the Olympic team as a lightweight that summer. In the end, that effort produced the USA's only medal in the event, and launched the man, in Mike Teti--who coached the crew with Curtis Jordan--who would return the USA to Olympic Eights glory in 2004...and would start that effort with the first of 3 consecutive golds just a year later in 1997, despite the USA 8's bitterly disappointing 5th in Atlanta. 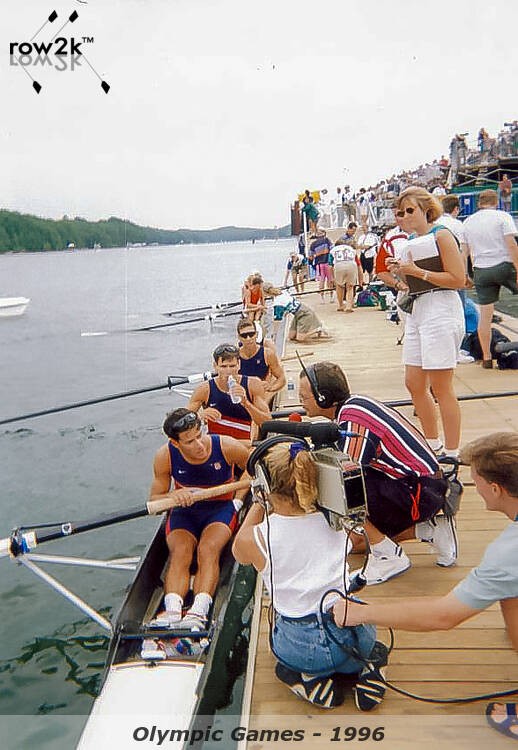 To see these guys--Bill Carlucci, Jeff Pfaendtner, Dave Collins, and Marcus Schneider--snatch up a medal and then paddle over to where I was standing, was nothing short of epic for a young guy just out of college. And there was Bob Ernst hurrying down the ramp with his NBC camera crew, capturing a home-cooked medal for viewers around the country.

The best bit, of course, came after the photo--and probably captured in a shot that I overexposed and never kept--when the guys got out of the boat, and we volunteers all got to watch as the US, Canadian, and Danish Light Men's Fours celebrated not on their own medals but the shared triumph of that first Lightweight Sweep final in Olympic History. Now that the LM4- event is history itself already, after a far too brief run as the one of the best races on the Olympic program--2012 anyone?--the picture I did get, and the short hot quote presser typed up minutes later that I held on to--in a shoebox!--is extra poignant:

As the three medaling crews of today's lightweight men's four final congratulated each other on the dock, Denmark's bow man, Niels HENRICKSEN, joked with USA stroke William CARLUCCI: "You surprised us by getting so fast so quick. Before we came over [here], we thought the Americans . . ." [threw hands down]

CARLUCCI told HENRIKSEN that the Americans had thought the same of the Danish four. These crews who became the first lightweight sweep medalists at the Olympic Games, stood very much together in their moment of triumph.