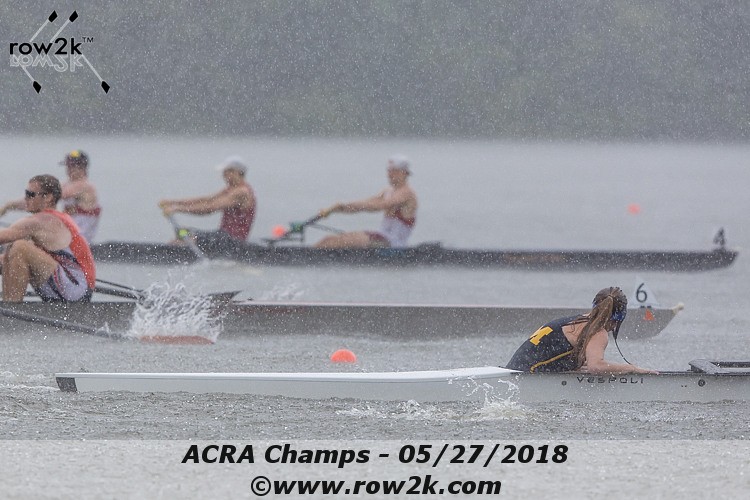 Rowing is an outdoor sport and functioning in adverse conditions is just part of the deal. While rowing in the rain typically isn’t a problem and can be at times fun, taking photographs using a heap of electronics can be a very different challenge.

For this week’s Behind the Photo, I chose an image from the 2018 ACRA Men’s 8+ final. When you work with row2k, you often go out and shoot in less than ideal conditions for extended periods of time. The benefit of having done this for a while is I have learned some hard lessons over the last 7 years. Lessons that have led my camera bag to become exceedingly heavy, but typically make me ready for whatever comes my way at any regatta. 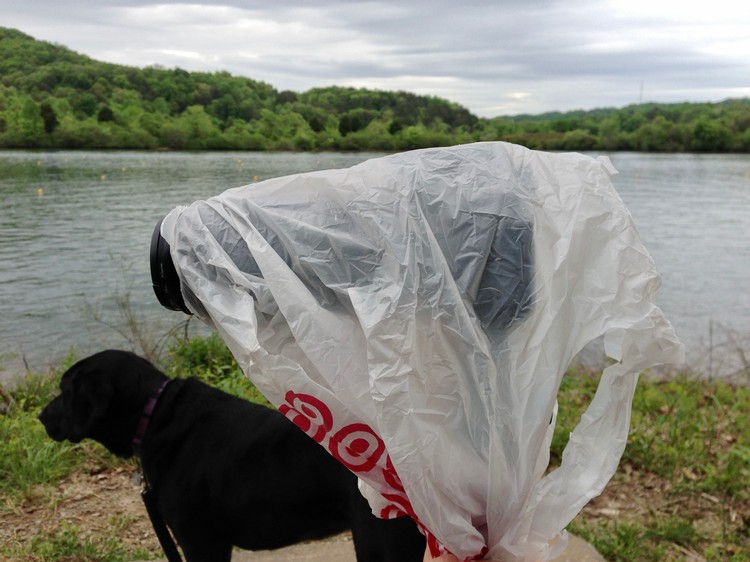 When I am shooting at the ACRA (American Collegiate Rowing Association) Championship, like most regattas, I am the only one taking photos. This typically isn’t a big deal until you get to finals day. ACRA’s schedule is set up so that a B final race rows through the finish followed by the A final for that event. The winners of the A final will then circle around to collect their medals by the finish tower while the next B final for the next event races behind them. I do my best to photograph the rowers receiving their medals, but at the same time I have to photograph the race going on behind them (while trying to stay out of the way of the parents who want that iPad shot of their kid). It's a fun balancing act, which is why I typically have a different camera in each hand, get way too close to the edge of the dock, and will throw one camera on the ground and sprint to the other end of the dock to get a shot.

For finals day at the 2018 ACRA Championships, it was a typical hot morning in Gainesville Georgia. It was mostly dry other than a few minutes of rain during an earlier final. Things were building towards the final 5 races of the day. The women’s 8 final had just rowed past and the top 3 boats were making their way to the dock. As Grand Valley pushed off the docks with their silver medal and USBC's women came in to collect their championship trophy, the skies at the finish line opened up. With only the Men's 8 A and B finals left before the regatta was over, it was time to act quickly. 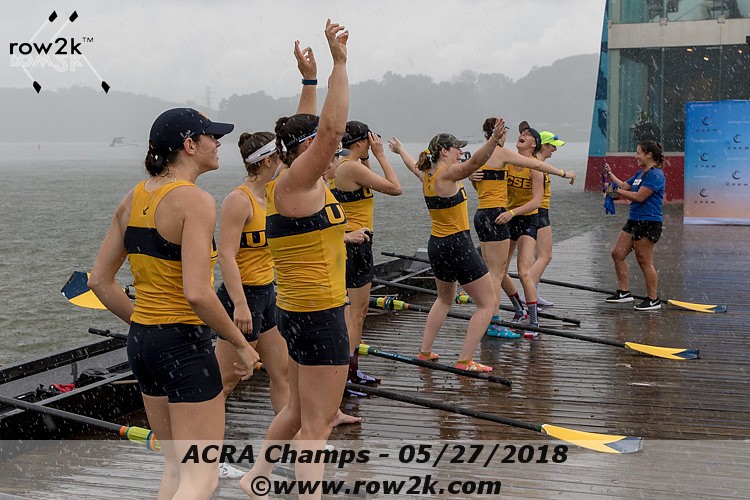 USCB on the awards dock

The first step I take when a storm pops up at a regatta is to figure out what lenses I want to use. Sometimes at ACRA I will use 3 or 4 different lenses to cover the finals (swapping lenses when I have a free moment to get a different look). Unfortunately, I only had two camera bodies at this time, so I had to pick the two lenses I could stick with while the rain continued. Swapping out lenses around a body of water is pretty common, but when the water is coming from the sky, you are stuck using the lens currently on your camera body. Opening up your camera during a downpour to swap a lens will almost certainly destroy your equipment. Consequently, I stuck with my standard 24-70mm f/2.8 on my Canon 7D Mark II for awards and my 500mm F/4 on my Canon 5D Mark IV for racing.

The next step was to protect my camera gear. Unlike my early days with row2k, my camera equipment has fairly robust weather sealing. However, given how hard the rain was coming down, I threw a rain cover over my 500mm lens. For my 7D that I was using for awards, I didn’t have time to put a cover on it, so I kept shooting and hoped for the best (it survived this regatta, just not the next). Finally, I threw a rain cover over my camera bag and went back to work.

Generally speaking, I leave my cameras in manual mode at regattas. Sometimes I will use some of the auto settings, but I find in bad weather, camera systems seem to struggle to find the right exposure for the situation. With a rain cover over the camera, I have found cameras struggle even more. Photography is all about working with the light you have. Compared to sunny days with off and on clouds and changing light, overcast days are often very easy to photograph because the light remains consistent. The shift from a sunny scene to a downpour however is almost the same difference as taking a photo during the middle of the day vs. taking a photo at dusk. The tricky part about that transition while shooting sports is the loss of light once the rain starts to fall can happen in an instant. One has to change setting quickly or will miss the shot (especially when awards and races occur at the same time).

When I photograph rowing, I generally want to have a shutter speed at or faster than 1/1000 sec to prevent motion blur in the shot. I was very fortunate in that this rain storm was in the middle of the day. Despite the rain, it was still relatively light out, which allowed me to shoot at f/7.1. For those who are new to photography, your f-stop controls the amount of light that will reach your camera sensor and it alters the depth of field of you image. Had I shot at f/4 I could have used a faster shutter speed and lower ISO, but given the amount of atmosphere I was shooting through, I wanted more of the image in focus. Finally, the lower the ISO you have the better, but in order to correctly expose for the scene, I was at ISO 500.

Now with all of the camera jargon out of the way, the task is to take the photo and hope that everything is in focus. ACRA finals are always exciting because they race (at least) 8 boat finals instead of the standard 6. Shooting 8 boats from the side and giving the future viewers of these photos a perspective as to what is going on can be a challenge. In this situation however the rain narrowed my focus. With the rain coming down that hard, it’s difficult to see all of the lanes clearly. It forced me to focus on the lead 4 boats of Michigan, Boston College, Virginia, and UNC. As these 4 boats approached the finish, the goal was simply to convey just how close the final was for these 4 teams (2.29 seconds between 1st and 4th).

I personally believe these photos turned out really well because of the rain. We all love rowing in pristine conditions where the water is flat, there is no wind, and it’s just the right temperature. For me at least, those perfect moments aren’t always that memorable. I always remember being freezing cold, soaking wet, and surviving crazy winds at regattas because of the challenge they presented as a rower and as a photographer. Those are the moments that stick out to me in this sport and those crazy conditions are what made these photos so memorable and unique.