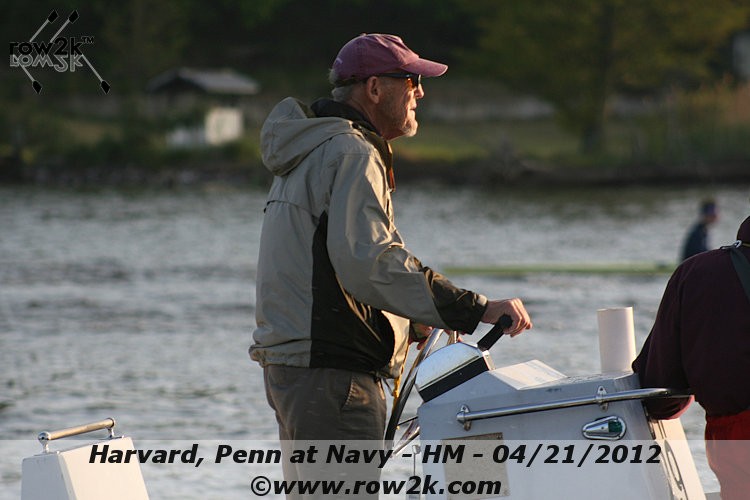 Not every row2k gallery is shot by the really good photographers at row2k--some are just the handiwork of a guy who happened to be there with a camera...and those are the ones I chipped in to the effort. With all deference to the artists who really take the great row2k shots, this is the story of one photo I was lucky enough to catch, noteworthy more for its historical footnote than any artistic brilliance or technical savvy. It was the chance to grab a pic of Harry Parker during what would be his last visit to race Navy on the Severn River in 2012.

In fact, on this particular race day, the limited skills I had managed to pick up after a year of shooting races for row2k were largely being foiled by the light and the camera position: I spent the morning taking pictures on the far side of the course from where the sun was coming up over the shore. With the crews in deep shadow and me shooting into the rising light, my simple understanding of shutter speed and exposure was not cutting it, as you can see throughout the gallery and most of the photos I took went straight into the trash bin before I uploaded the salvageable ones that afternoon. But, even as I was mucking it all up and just hoping I might get lucky with the settings at some point, there was one shot I knew I had to get: Harry.

By 2012, of course, we all knew that Harry Parker was sick, and while his blood cancer did not seem to be slowing him down much--or slowing down his crews at all--there was a sense in the league that Harry's time was finite, if not short. Since the Adams Cup only comes to Annapolis once every three years, we all had a strong sense that this would be Harry's last visit to the Severn, and I was determined to get a shot of him that could capture his personality and perhaps commemorate, in a small way, what he had meant to this particular rivalry between his Harvard Crimson, his alma mater, Penn, and the Navy, in which he had served for a time when training for the 1960 Olympics.

Fortunately for me, even with the challenging lighting, racing at Navy is full of iconic visuals. You have the big sweep of the bridges, the wide open river, and--of course--the least wakeless launches in all of rowing: those grey-hulled, 90-horsepowered Boston Whalers. Dubbed "BWs" by the Naval Support Annapolis Small Craft Division that maintains them--and which loves a good acronym as much as a handy abbreviation--the BWs are a staple of Navy rowing and have been around seemingly forever, patrolling the Severn since at least the mid-80s. In fact, the BWs are a real hit with visiting coaches, especially now that so many of them are driving Stillwaters with much smaller, slower engines back home.

So, all I really needed was a shot of Harry in a BW--nothing would say "last race on the Severn" more--but my first attempt did not go so well. Snapped before the start, it was just Harry and his staff floating on the river, and Harry is even caught looking at the camera, as if he knew what I was up to.

Once the race got underway, though, I could see how intent he was on the action, leaning in and almost vibrating with excitement as his crew dug in, then started to get some traction against a fast starting Navy crew, and finally put their bow in front. The way the 1V race unfolded was a hallmark of Harry's crews, especially in that era: a patient, almost three-quarter speed start by the Harvard crew, but then they could row with a relentless rhythm that would carry them through the early leaders, and often to a full measure of open water as they really got going in the last 500 meters. The way those crews raced was nearly as masterful as the legendary Harry himself, and that 2012 Harvard 1V was no exception. For all that Navy and Penn threw at them off the start that morning, the Crimson calmly held their ground, then snatched back the seats they had surrendered as they came down the track.

That was the shot: Harry, hand on the throttle, thrilling to the way his crew was winning the boat race. As it happens, the best close-up--and the one where I somehow managed to get the settings right as the sun crested over the eastern shore in a moment of pure luck--was during the nail-biter that was the 2V race, but any instant of that morning race would have offered up a similar shot, because Harry was fully engaged, and fully alive, throughout the racing.

As a coda, and as just another glimpse of what made Harry such a great coach, I ended the morning back at the Navy boathouse, cornered by Harry. He wanted to know more about the Navy 2V that his JV crew had only narrowly beaten, in the very race where I had gotten that shot. The tight margin was a bit of a surprise, because Navy had lost by a good amount just the week before to Cornell and Syracuse. Had Navy gotten faster? Harry wanted to know. Or was there something off in his crew that had made it close?

The short answer, which I led with, was that Navy had just had a better race this week, but he stopped me, a glint in his eye. How did their race go last week? he asked, wanting to hear all about it, even though it was "just" a JV race. As we walked down the length of the boat bay, he pulled out the whole story: how Navy had been leading both Cornell and Syracuse, by open water in the first 1000 only to falter when the rhythm was not sustainable. So they did have power and speed, both of which they had put together more efficiently against Harvard. Harry nodded and smiled a little at the end of the bay, and he had his answer: the margin he had just seen against his crew was legitimate, both crews were good, and that was enough.

When I related the story later to Chris Allsopp, the Navy boatman who had been Harry's assistant on the 1984 Olympic team, he just shook his head and said: "That's Harry. He just loves racing." And that is what the shot captured.

Harry made it to just one more Adams Cup, his 51st, and it was a home race for him on the Basin that next year in 2013. His crew took that day, too, giving Harry his 36th Adams Cup win. He passed away just shy of two months later, on June 25th, 2013.