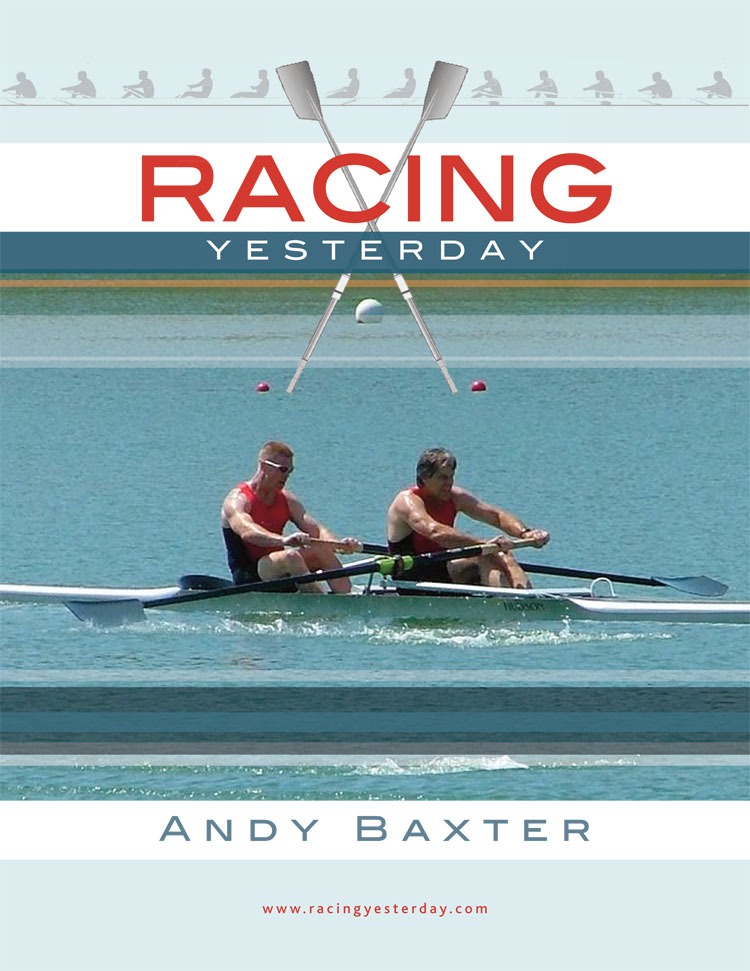 If life is about the journey and not the destination, Andy Baxter and Stephen Kiesling are experts at life. They have journeyed on a rough path (or water) and both, in their own time and style, have written about it.

In Racing Yesterday, an electronic book by Andy Baxter (http://racingyesterday.com/), he chronicles the journey of training for the Olympic Trials in a pair with Stephen Kiesling, a 50-year-old 1980 Olympian, former Yale oarsman, author of The Shell Game and current magazine editor. Andy Baxter, youthful at 41 and lacking the Ivy League and Olympic rowing resume, provides a unique perspective on training for the ultimate challenge in United States rowing as a business owner and parent of two children. Add writing about it to the picture and it is no wonder Baxter's resting heart rate was elevated from time to time.

Baxter's voice is lighthearted, but he also takes training to the limit seriously. As a fitness expert (owner of Baxter's Fitness Solutions in Ashland and Medford, Oregon), Baxter diligently monitored his physiological response to the high level of work he and seasoned rowing athlete Stephen Kiesling embarked on in 2007. HIs book is designed as a logbook or journal, sharing tidbits of the day-by-day tasks of preparing for the Trials. After arriving at the boathouse one morning with heavy winds producing un-rowable water, he writes:

"So now we are committed, at least in principal, to going to the boathouse and doing that workout...on the erg...We warm up for 5 minutes and go through the obvious statements--"this is going to hurt a lot", "this is going to suck", this is not going to be pretty", "why don't we just vomit now and get it over with," the usual stuff. The first piece is always a "testing the water" piece. If you dive too deep in the pain tank you may not make it back out to survive the entire workout. At least that is the way I see it. I pull a 1:31. Steve pulls at 1:28. So it begins. We get through the first piece without drama, none...Surely the second piece will be a fight for survival, a pain fest like so many before. And that...just does not happen. We hit it hard and in control. The splits continue to drop. The pain is in check. I finish the workout at 1:27 and Steve finishes at 1:24. In a perverse way we finish refreshed and excited. This is working!"

This kind of enthusiasm is infectious, and his anecdotes create the frame for their remarkable pilgrimage to the Finn Caspersen Rowing Center on Mercer Lake, New Jersey. Baxter and Kiesling design a course of training to emerge from the Masters 1000 meter ranks to the elite 2000-meter throw-down in the Spring of 2008 before the Beijing Olympics. This unprecedented and unlikely story did not produce Disney-esque results...there was no Olympics for Kiesling and Baxter. But the struggles along the way are fascinating, and anyone who ever aspires to reach a goal as a masters athlete can see how close you can get when you push like this "unlikely pair." Many athletes do not even get on the same playing field, but there they were locked on in a lane at the Olympic Trials in April of 2008.

This book references some of the notable figures in rowing, many from Kiesling's era in the elite ranks (including Jim Dietz and Dr. Fritz Hagerman, still important figures in US Rowing), Andy Medcalf from Penn AC; he also gives a little ink to some current coaches and athletes in World and US Rowing: Australian pair Duncan Free and Drew Ginn, former US Coach and current Cal Coach Mike Teti, the Pocock Family of boatbuilders, US Olympic medalist and current US Rowing coach Bryan Volpenhien, Joe Bouscaren, and more; Baxter situates himself in a rowing habitat where he is a newcomer at 41.

Read this monograph for the inspiration and think about the journey and the courage to take on significant emotional and physical pain for more than a year (willingly and with conviction), and reconcile the journey with the destination.