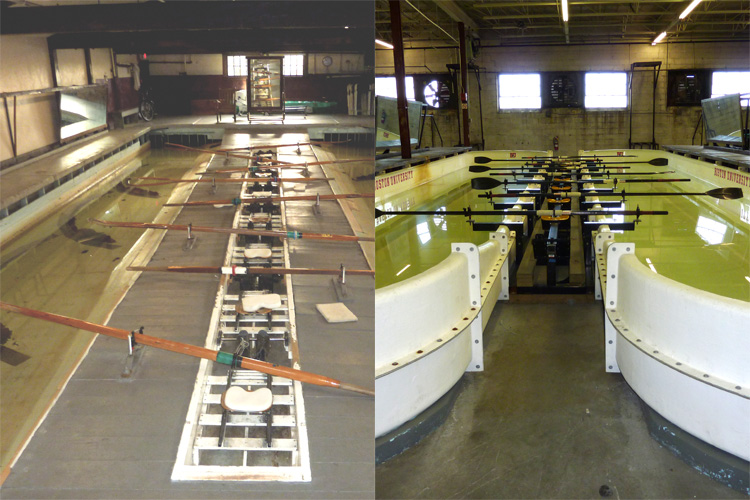 Newell tanks on the left, BU tanks on the right
Working on a film is a lot like doing double sessions during spring break. In both cases, a day off is a beautiful thing. I was just settling in for a good's night sleep when my cell phone rang. It was Trish Gallaher, the props master.* Apparently they were in a total tizzy over at first unit**, which was being staged at the BU tanks from 9 pm to midnight.

She briefly tried to describe the situation to me, but there was so much noise in the background that I couldn't really understand what she was saying... something about the correct position of the oars resting in the oarlocks.

It seemed trivial enough, but of course this was the sort of insignificant thing that could set off total pandemonium, particularly among group of hyper-stressed Hollywood types.

I told her I would get over there as fast as I could.

If you've never had the pleasure of visiting the BU tanks, you aren't alone. (I'd never been there, and I've lived in Boston for twenty years.) They aren't listed as one of the top ten tourist destinations in Boston, and they aren't very easy to find either. Located in the bowels of an industrial looking building in Brighton, they look (and smell) a bit like an old boiler room. Then again, most tanks do.

Trish was grateful when I arrived. She met me outside, near a loading dock, where a small army of union guys were wrestling with some fake walls.

"Thank god you're finally here" she said. "Things are totally crazy! There's way too much testosterone flying around in there. You've got to go in and calm them down!"
She made it sound like I was entering a lion's den. But this was first unit after all, the Big League. David Fincher was in residence, sitting at the helm of the video console while his 1st AD Bob Wagner ran around like a total madman, barking orders to the usual assortment of odd-looking people who inhabit a movie set.

Even screenwriter Aaron Sorkin was there, sitting in one of those tall director's chairs and looking as smug as the Cheshire Cat.

"Quiet on the set!" Wagner shouted.

"Quiet on the set!" his 2nd AD repeated.

Wagner broke his stride only briefly, to shake my hand, then dashed off like the White Rabbit in Alice in Wonderland.

It was the first time I'd been on a real movie set before (the river didn't really count) and it was indeed like entering a world of illusion. In this case, the illusion was that the BU tanks had been made to look like the Harvard tanks.

Art director Don Burt came straight over to me and explained the problem.

The big debate was about how the idle tank oars should be positioned in the oarlocks - feathered or squared, shipped in or extended. That was it. This is what had created the whole kerfuffle.

I tried to keep a keep a straight face as I examined the oars, shifting them around a bit while I said "hello" to Armie and Josh. They'd been sprayed with glycerin to look like they were really sweating, but of course their hair still looked perfect.

In ten minutes I had adjusted the oars to everyone's liking.

If you haven't seen The Social Network yet, the tanks scene is one where the Winkelvoss twins are working out by themselves and their business manager, Divya Narendra, suddenly arrives to announce that Mark Zuckerberg has just stolen their idea for Facebook.

It isn't much of a scene really, but the amount of set preparation needed for this sixty second clip was formidable. Don Burt proceeded to give me a short tour of his masterpiece.

He had built the entire set back in LA after taking photos of Newell from the summer scouting trip. He had reproduced the old sliding mirrors, a vintage wooden doorway, and some old rowing plaques.

I was very impressed, and I told him so. He beamed like a proud craftsman. Then I saw the pair of crossed oars hanging on the wall, painted blue.

"Well, it's nothing really, but Harvard would never hang a pair of blue oars on their wall."

"Really? Why not?" His expression had suddenly fallen.

"Well, Harvard's color is crimson, and blue is actually the color of their archrival, Yale."

Don was silent for a moment, but I could see the wheels turning. I felt bad, really, for pointing out this faux pas. But there were those blue oars, hanging on the wall, and we both knew they had to go.

He beckoned to one of his art department assistants. In a matter of minutes, the oars were removed, painted red, and reinstalled.

It was time to start shooting. David Fincher waved me over to sit with him and have a look through the camera monitor. It looked good to me, but what the heck did I know? Aaron Sorkin was sitting nearby, acting as a collaborator. It was quite a privilege, of course, to rub shoulders with both of these guys, who were considered to be the hottest duo in Hollywood.

"I'm sorry you had to go through that whole debacle on second unit," Fincher said, while we waited for the final adjustments. "That 1st AD will never work for me again."

"And thanks for your comments on my script," Sorkin chimed in. I just smiled, knowing that much of the script had been left intact.

"Yes, if you see anything else that doesn't look right, just point it out," Fincher said.

To give myself another task, I started taking stroke ratings during each take, so that any cutting and pasting would match up. But I still had plenty of time to see how the whole operation worked.

David Fincher seemed like a very composed, intelligent guy to me, unlike the reputation that I had been hearing about. Ditto for Sorkin. While Fincher occasionally loosed a barbed comment and Sorkin a loud guffaw, mostly these two men seemed to possess the quiet confidence of a good coach or professor - one who would make you want to do your best work for them.

Fincher's directing technique with the actors was rather ingenious, and I got to see it in action that evening. He simply had Armie and Josh do as many takes as they could handle (and then some), until he "worked the acting out of them."

After several repeated takes they began to drop their guard and deliver their lines in a more natural fashion.

I thought this was a lot like the old adage in rowing "mileage makes champions," where you rowed many, many miles in a shell until you finally relaxed and learned how to become super efficient with your technique.

There wasn't a lot of yelling and screaming, just the repeated comment. "OK, now do it again."

At the end of one of the many takes, Josh suddenly threw down his oar down in frustration.

"Josh, don't throw your oar like that," Fincher said calmly.

"Actually, that's kind of a nice touch," I said.

"Really? Would an oarsman throw his oar like that?"

"Absolutely, if he was pissed off. And Tyler Winklevoss has just learned that his idea has been stolen."

"OK, keep it!" Fincher called out to Josh.

Aaron Sorkin caught a bit of our exchange.

"So how were the Winklevoss twins regarded at Harvard?" he asked me. "I mean, were they generally well-liked?"

I shrugged. "I'm not sure if I can really answer that question." I was being honest, since I didn't know them all that well, although I had heard some colorful stories from a few Radcliffe co-eds.

Like the film itself, it was all a matter of perspective.

"Hmm. I just hope I've portrayed them the right way," he wondered out loud, shooting a glance at his research assistant.

It was clear that Sorkin, Fincher, and Don Burt just wanted to get things right, which was not always the case with other movies I had worked on. To their credit, they had the humility to admit when they might be wrong.

Of course, absolute truth is a difficult thing to access.

Fincher had based a lot of the internal tension in the film on the context of the drama, rather than "accuracy" of the characters. To him the Facebook story was a classic case of the nerdy Jewish intellectual vs. the rich, entitled children of the Harvard Establishment. Sorkin saw a complexity of characters, none of which were completely sympathetic or evil.

It was getting late, and I begged off for the rest of the evening. I certainly didn't need to see any more takes, and things seemed to be under control. I handed my stroke coach off to a PA.

On the way out, I ran into Bob Wagner again, talking with JoAnn Perritano. As always, they were discussing what came next.

"So how are we going to get those Henley scenes?" Wagner asked me. "None of the clips we have look any good, although the pairs stuff is excellent."

"I guess you'll just have to go to Henley," I told him. I had been pushing for this trip all along, knowing that the guys were excited by the possibility.

"David's wife Cean wants to try to avoid going to England," JoAnn said. "We'll probably just end up shooting those scenes in LA." Cean Chaffin was the executive producer for the film, and she oversaw all the big picture costs.

"It's just too expensive to go to England."

I told Wagner that I thought this was a shame, since Henley was totally unique and wonderful. We started to digress into the subject of scene cutting, and how quickly the human brain could absorb an image. Wagner started to explain some study about dreaming, and how Hollywood had somehow arrived at a rate of scene shifting that mimicked REM sleep.

He lost me a little. Did he mean that a movie was like a guided dream?

"Don't worry, I'll explain it to you over in England," Wagner laughed.
"But I thought we weren't going to England?"

*The "Property Master" is the one responsible for all use of props on the set, and in conjunction with the script supervisor, for maintaining set continuity.

**First Unit is the "first string" crew, and usually handles all the major scenes in the film involving the primary actors. Second unit usually handles the "background" scenes, known as "establishing" shots.