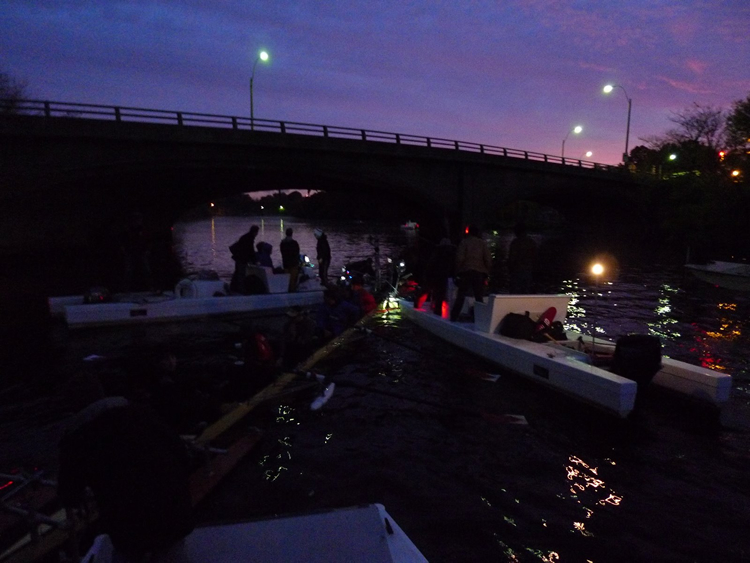 On the launches before dawn
Second AD Scott Kirkley was not having a good day. He had just been berated by the first AD again - for about the seventh time that morning - and the sun had not even risen yet.

It was about 6 am, and we were sitting in my launch along with Adrian, the wardrobe coordinator. I was trying to line up five pairs across a narrow stretch of river for the first take of the day. It was pitch black.

This dialogue wasn't as scintillating as an Aaron Sorkin script. In fact it was downright mind-numbing. But it was real, and it betrayed the mounting frustration of a difficult week.

Our "call time" had been 4:30 am for four days straight, an ungodly hour even for oarsmen. The cast and crew would drift into the boathouse, barely conscious, and wander over to the crafts table to see if the coffee bin had been set up yet. While the actors went through wardrobe, a PA (production assistant) would distribute walkie-talkies to anyone who needed to be in the loop.

At first, I felt important to be included in this group, which included: Scott; 1st AD Jim Reemer*; key grip Greg Mustin and his staff of "grip monkeys;" the marine safety crew headed by Captain Will White (a man whose enormous stature matched his sense of humor); another AD named Noble who could not swim and hated the cold weather; the script supervisor; and two or three PA's. Not to mention a bunch of cameramen.

After a few days, I realized the walkie talkie was really just an electronic surveillance bracelet.

Five pairs began to row at three quarter pressure, side by side, in the very confined space just below North Beacon bridge. There were near collisions on virtually every take, including one where Bailey and Abegg (playing the Winklevoss twins) nearly ran straight into the boom camera. The entire set up was crazy and dangerous, and I had told them so, but my words had fallen on deaf ears.

1st AD: "Cut, cut! What happened, guys! Back to starting positions."
Scott: "Copy that. Guys, row back to the start."

The pairs rowed back, shaking their heads and joking among themselves as to how many takes they would do have to do today. The oarsmen were going a little stir crazy, because they couldn't ever wind up into a real piece.

Poor Scott. If anything went wrong, he was generally getting blamed for it. And quite a bit was going wrong.

Of primary concern, David Fincher was not happy with the footage he was receiving, known as "the dailies." He was passing that dissatisfaction along to the 1st AD, who was then venting on Scott. The 1st AD was a nervous wreck of guy whose job was to manage everything on the second unit - the river shoot - while Fincher and Wagner were shooting all the interior scenes around Boston - first unit.

Scott smoked cigarette after cigarette in my launch and he swore under his breath. But he could do nothing. There is an established hierarchy on a movie set, and when tensions ran high the pressure got intense.

"Do you know what the average life expectancy for a first AD is?" Scott asked me.
I shrugged.

The question in both of our minds was, what were we going to do in the meanwhile?

At the end of the long day, when all the boats and camera rigs were put away, a small group of us secretly gathered inside the grip truck to drink a beer and discuss the problem.

Greg the key grip immediately went off on a tear about the 1st AD. Reemer had been riding him constantly about not changing the camera rigs on the boats fast enough. He had insulted him several times and called his competency into question.

"You don't mess with the grips," Greg said.

"Damn straight," one his guys agreed.

"So what are you going to do?" said Captain Will White, the marine coordinator. His eyes lit up at the mere possibility of some miscreant behavior. After all, he had worked on Pirates of the Caribbean, and he was no stranger to the ways of mutiny.

The next morning, when the 1st AD gathered us all around to discuss the plan of attack for the day, he discovered that all of the little magnetic boats were missing from his metal demonstration board.

"All right, who took my f-ing boats?" he growled.

But of course no one spoke up. It was, in fact, a rather priceless moment, except that it only made the 1st AD even more ornery and irrational that day.

He lashed out particularly hard at his usual targets, Scott and Greg, but when he started harassing the oarsmen I was instantly drawn into the fray. Reemer said some inappropriate, personal things to Lucas Abegg, one of the Harvard guys, while I was standing nearby, and then later that day compromised the oarsmen's safety and well being on the water.

I was elected to be the one to do something about the situation, so that night I called up JoAnn, the unit manager. Although diminutive in size, she had quite a bit of power, mainly because she controlled the immediate purse strings of the project.

When I told her about the problems with Reemer, she immediately objected, saying that the guy had an excellent reputation in Hollywood, etc. Then I told gave her some specific examples of his inappropriate behavior, particularly with the oarsmen. She got real quiet.

"JoAnn, I don't know much about your world, but I do know something about leadership and teamwork, and this guy has no sense of either," I told her. "The whole operation is falling apart."

She said that she would take care of it.

The next morning, JoAnn showed up at 5 am. She stood about 4' 10" tall, and wore a big winter coat and one of those Peruvian hats with the pointy tops and the earflaps.

JoAnn was not amused and told him to shut it. Then she gestured to Reemer and the two of them disappeared into the semi-darkness surrounding the CRI boathouse.

When they returned fifteen minutes later, the 1st AD was a changed man. He was utterly silent as Noble, the other director who couldn't swim, took charge for the day. And as we headed out onto the water, for the first time ever, there was virtual silence over the walkie talkies. No shouting. No abuse. Just an occasional directive from the director's launch. Everyone relaxed, and we got the takes done.

"This is the way it is supposed to be," Scott told me.

The day went well, and the dailies were acceptable. Noble was an excellent AD, despite his reluctance around water. Reemer just sat in the front of the director's launch, slouched forward, the hood of his jacket pulled over completely over his head.

JoAnn had also stripped him of his walkie, which was, in effect, a virtual castration. By the end of the day, Reemer was lying down flat in the bottom of the launch, utterly defeated. He was a broken man.

Greg the Grip and his crew were overjoyed, and gave me a thumbs up from their launch. Will White also tried to congratulate me at the end of the day, speaking in code over the walkie talkie, but I somehow I could not share their enthusiasm.

It was just sad, really, to see a grown man acting like this - both before and after his change in status. There was clearly a dark side to Hollywood, and I had just begun to get a taste of it.

*The name has been changed for obvious reasons, and (mysteriously) you will not find this man listed in the credits.